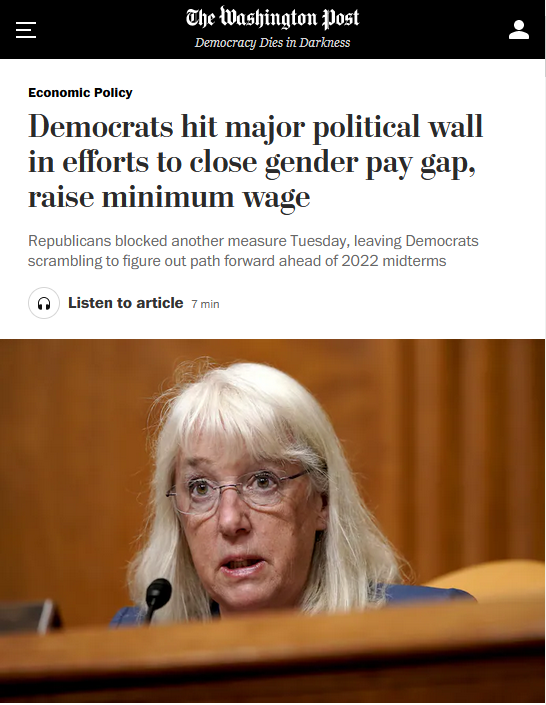 The first paragraph in the piece, by reporter Tony Romm, laid out the situation for readers:

President Biden and Democrats in Congress suffered another setback in their push to boost millions of Americans’ paychecks, after the Senate on Tuesday opted against taking up a bill that supporters said aimed to ensure that women in the workforce earn the same as their male counterparts.

Sure, Republicans were mentioned in the subhead and in later paragraphs. But headlines and leads frame the news—and are often all people read of it. So the takeaway from the Post‘s version of the killing of equal pay for women is that the killer was…a “wall.” Or the Senate. Read as: Washington politics, in which no one and everyone is to blame for “opting against” getting things done.

But Romm continued the blame-shifting euphemisms later in the piece:

Democrats possess only a tie-breaking majority, not the 60 votes required to avoid political headwinds altogether—forcing them to consider uncomfortable compromises to advance their agenda.

Alternatively, one might formulate that problem as being that our political system is highly undemocratic, and that Senate Republicans—who represent 43.5% of the population, and haven’t represented a majority since 1996—are brazenly abusing that system to block the majority from doing much of anything.

If it were spelled out that way, though, the solution would be obvious: Change the system. Which is exactly why the GOP no doubt cackles with delight at coverage like this, which deflects blame away from them and the undemocratic institutions they exploit, and thereby props up that system.

ACTION ALERT: You can send a message to the Washington Post at letters@washpost.com, or via Twitter @washingtonpost. Please remember that respectful communication is the most effective.