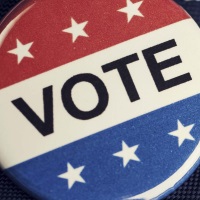 Continuing to claim there is “so much evidence” of voter fraud in the 2020 presidential election, former President Donald Trump offered two new distortions of the facts about election results in Georgia, a state where recounts showed he narrowly lost by 12,670 votes.

Trump’s latest claims about an “election hoax” came during a speech at the annual Conservative Political Action Conference in Dallas on July 11.

“Every time the media references the election hoax, they say the fraud is ‘unproven. And while there is no evidence …’ No evidence? There’s so much evidence,” Trump said. “You saw what happened in Georgia the other day. They found 35,000 votes. Then they deleted in Georgia over 100,000 votes. I said, because they were so bad, voters, I said, ‘Why didn’t you try doing it before the election? Lost by this much. Why didn’t you do it before the election?'”

“The governor of Georgia and Georgia secretary of state let us down,” Trump said.

These are distortions of the facts.

In his CPAC speech, Trump claimed, “they deleted in Georgia over 100,000 votes.” Georgia didn’t delete any votes.

Giving Trump the benefit of the doubt, he likely meant to say that Georgia had deleted 100,000 voters, not votes. That is something very different. And even then, Trump is wrong to cite this as evidence of fraud.

In June, Georgia Secretary of State Brad Raffensperger announced the first major cleaning of the voter rolls in Georgia since 2019. As a result, he said, “101,789 obsolete and outdated voter files will be removed from Georgia’s voter registration rolls to ensure the state’s voter files are up to date.”

In his June announcement about the list update, Raffensperger, a Republican, said, “Federal law makes it impossible to conduct list maintenance during general election due to federal mandates before federal elections that force states to rely on voter rolls that may include some obsolete files.”

Most of those removed from the voter files — 67,286 — were related to the state following up on National Change of Address, or NCOA, forms submitted to the postal service; another 34,227 voter files had election mail returned to sender. It is a long process to purge such people from the voter rolls, as federal law requires there be no contact from the voter for two election cycles, which is four years.

The secretary of state’s office also removed 18,486 people from the voter rolls because state vital records or the interstate Electronic Registration Information Center indicated they have died.

“There was no record of any of these individuals having cast a ballot in the November 2020 election or January runoff,” Raffensperger said of those on the voter rolls who died before the election.

The second issue is about Georgians who moved from one county to another in the state more than a month before the election and may have voted improperly in their old county.

When Trump says “they” found 35,000 votes in Georgia, he is referring to an analysis performed by Mark Davis, president of Data Productions Inc. The analysis, which was featured in a recent article in The Federalist, identified more than 100,000 Georgians who filed an NCOA form with the U.S. Postal Service more than a month before the election, changing the delivery of their mail to an address in another county in the state.

Davis matched that list to voting data from the Georgia secretary of state’s office and concluded about 35,000 of those people voted from their initial address.

The Georgia deadline to register to vote in the Nov. 3, 2020, presidential election was Oct. 5.

Davis said the data suggest more than 100,000 Georgia residents moved from one county to another in the state and filed an NCOA notice with the post office, but never got around to re-registering to vote in their new county before the 2020 general election or updating their address on their driver’s license (which would have triggered an automatic voter registration update). As a result, he told us in a phone interview, after the voter registration deadline passed they “found themselves in an untenable situation of their own making,” essentially that they could not vote.

Davis said voting records show about 35,000 of those people did vote.

Davis acknowledged that some of them could be college students or military members who filed permanent NCOA notices with the post office even though they have not changed their residency. Those people could vote legally in their home county.

But Davis said that since the election about 10,300 of those people have updated their voter registration to the very same address as indicated in their pre-election NCOA notices filed with the post office.

“There’s no getting around the fact that they have basically proven the post office information was accurate,” Davis said, alleging that those individuals changed residency more than a month prior to the election and voted improperly in their old county. Although the Georgia secretary of state’s office provided us with a list of those 10,300 people, we could not independently verify whether they voted improperly.

Officials in the Georgia secretary of state’s office acknowledge there could, in fact, be some cases such as Davis described, and they say they have been looking into the data Davis provided. But they say Davis is glossing over several legal realities that affect this issue.

“Bottom line is that determining whether someone who moved from one county to another should have been eligible to vote in the November election requires applying a complicated array of both federal and state law (some of which are contradictory) to each individual’s specific factual scenario,” Walter Jones, a spokesman for the secretary of state’s office, told us via email. “A spreadsheet listing voters’ names doesn’t come close to meeting that standard.”

Robert M. Stein, a political science professor at Rice University and an expert on voting and elections, said Georgia law is not specific about what constitutes a residence or living in a county of the state.

“One could imagine voters who have several residences in the state e.g., vacation homes, but only register to vote in one of these locations,” Stein told us via email. “Therefore a change of mailing address is not evidence of a change in residence, only the desire to receive one’s mail at a different location. … Merely changing where one chooses to receive their mail, and continuing to vote where they continue to reside should not be interpreted as evidence of circumventing GA’s voter registration requirement.”

Establishing a person’s residency is complicated and involves a number of variables, including where a person claims a homestead exemption, and even a person’s “intent,” Jones said. He noted that 86% of the voters identified by Davis voted in person, meaning they showed up in the polling location where they were registered, showed their photo ID and signed an oath that they resided where they are registered. The other 14% voted absentee by mail, he said, “submitting an absentee ballot application saying that they still resided where they were registered.”

Indeed, Georgia courts have ruled that an NCOA alone is insufficient to challenge a voter’s eligibility. Using NCOA lists to purge names from voter rolls takes years, as residents are given two election cycles to respond to election officials’ notices.

In addition, the Georgia secretary of state’s office said federal law largely prevents officials from purging voter rolls in a presidential election year, as we noted above.

The National Voter Registration Act of 1993 — which requires states to make a reasonable effort to maintain and update their voter rolls, including removing people who have become ineligible to vote because they have moved — bars states from altering voter registration lists within 90 days of a federal election. That basically precludes list maintenance in a presidential election year — which in Georgia includes primary, general and run-off elections.

In a statement provided to FactCheck.org, Raffensperger said he tried prior to the election to call attention to the constraints of the 90-day exclusion, but federal legislators did not address it.

Raffensperger said “federal law and court precedent makes it effectively impossible to rely on National Change of Address forms alone to conclude someone has moved residences before an election.”

“I’ve been calling for reform of these laws for years,” he said. “I’m glad Davis, The Federalist, and the Congressional Republicans who could have done something before the November election, are finally listening to my concerns.”

Stein, the Rice University professor, said Raffensperger’s response is “spot on” regarding the NVRA and issues associated with list maintenance.

“The specific reference to voters moving with or without submitting a change of address and not re-registering is problematic for maintaining an ‘accurate’ list of persons eligible to vote in a specific jurisdiction,” Stein told us via email. “But as the GA SOS representative noted, this is a problem with the NVRA, not in the state’s administration of voter files.”

Stein added that the “extent and size of this voting behavior is hard to measure but I suspect it’s not consequential.”

Davis doesn’t agree. These issues arose in every county in the state — evidence of a systemic problem, he said.

Davis said the complaint about these kinds of voters was part of the lawsuit the Trump campaign brought against Raffensperger and Kemp, challenging the election results. The suit was thrown out by a federal judge in January. Davis said, “That ship has sailed.”

Indeed, even if voters were determined to have voted improperly, there is no way to know who they voted for or what impact it could have had on the outcome.

“As a practical matter, it’s July 2021, and the election is not going to be redone,” Davis said. He said his motivation is to call attention to the issue so it can be fixed for future elections.

The Georgia secretary of state’s office said this is not a new issue, nor is it unique to Georgia.

“We have consistently said that the issues we were seeing post 2020 election were similar to issues … that come up after any election,” Jones said. “This is exactly one of those issues. It doesn’t invalidate the 2020 election any more than it invalidates any previous election in Georgia. It does highlight that the federal law that restricts states from keeping better voter rolls needs to be reformed.”