In a recent New York Times “America in Focus” opinion piece (9/13/22), the paper gathered 16 Americans to discuss their views on the economy and how it’s affecting their personal finances.

The focus group included seven conservatives, seven “liberals and progressives,” and two moderates. Participants ranged in age from 24–65, lived in several different states, represented a handful of ethnicities (though the majority were white), and worked in occupations from food delivery to law.

The paper ran with the headline: “Is America in a Recession? Here’s What 16 Biden and Trump Supporters Think.”

Supporters of a losing candidate 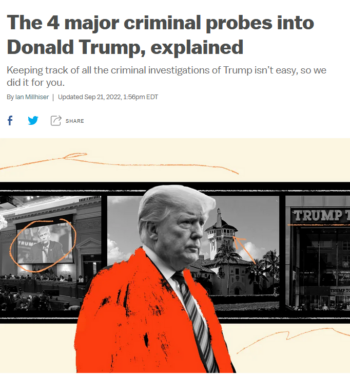 Now, asking individuals whether the US is in a recession is peculiar, given that the most widely accepted definition of a recession—“two consecutive quarters of decline in a country’s GDP”—is not subjective. You might as well convene a focus group to ask whether a heat wave was breaking temperature records.

But most concerning is the second part of the Times’ headline. Donald Trump lost his second presidential bid nearly two years ago, and is being investigated for inciting an insurrection to retain power, removing classified documents from the National Archives, and other criminal charges. He has not officially announced any plans to run in 2024. 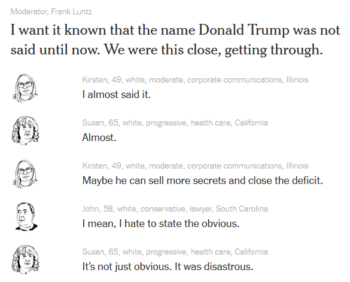 Focus group director Frank Luntz comments on the near-absence of talk about Trump.

However, it’s not clear that the headline accurately describes the participants. Trump’s name doesn’t even come up in the conversation until the very end—which moderator Frank Luntz and some of the interview subjects acknowledged. “We were this close,” Luntz joked.

Throughout the entire piece, participants are classified by their ideologies, and the article only definitively identifies two Biden voters. Otherwise, subjects are classified as conservatives, liberals/progressives or moderates—not by whom they voted for or plan to vote for.  It’s presumptuous, irresponsible journalism to assume all conservatives are “Trump supporters” and all progressives are “Biden supporters”—especially given that recent polling averages show that 47% of Republican respondents would like a figure other than Trump to be the Republican presidential nominee in 2024.

On the other side, the New York Times itself (7/11/22) reported that 64% of Democrats do not want Biden to run in 2024—a figure that would likely be greater if the many liberals and progressives who don’t consider themselves Democrats were included. So labeling participants chosen for their ideologies as supporters of particular politicians is a guess, and often an inaccurate one. (A real sample of US adults, of course, would include the one-third of eligible voters who don’t vote, largely because they don’t see the point.)

The choice to nevertheless silo the participants as either Biden or Trump supporters two years after the election that Trump lost is a concrete example of how the corporate press feeds into the sensationalist circus of Trumpism, keeping him at the forefront of the news cycle, even in stories that barely involve him. 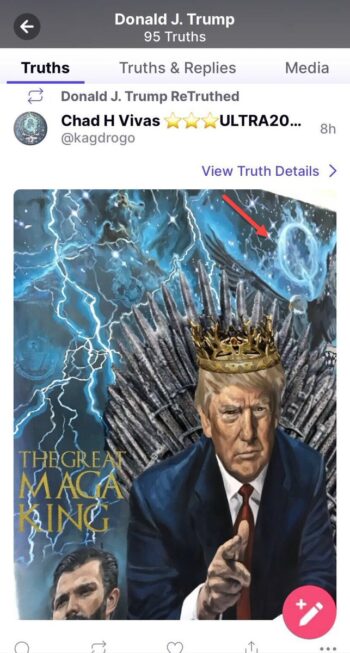 On his own social media platform, Truth Social (5/16/22), Donald Trump “ReTruthed” an image that linked him to the QAnon conspiracy theory and its foretold “storm.”

Still, Trump’s chokehold on the Republican Party has 70% of its voting bloc believing the unequivocally false claim that Biden lost the 2020 election (Poynter, 6/16/22). This highlights the danger of normalizing Trump’s ideology as the counterbalance to an establishment Democrat like Biden.

Criticism of Biden and Democrats is valid and necessary, but Trumpism is something else entirely: Thousands of his followers took part in the deadly January 6 insurrection that sought to obstruct a democratic transfer of power. A quarter of Republicans believe in the central tenets of the QAnon conspiracy theory: that a cabal of Satan-worshiping pedophiles control the government and media, and that an ever-coming “storm” helmed by Trump will destroy their power (PRII, 2/24/22).

A politician who actively tried to manipulate election results and sow baseless distrust in electoral outcomes is a direct threat to democracy. Casually treating his political base as the natural alternative to the elected government confers legitimacy on this violent and delusional worldview.

The issue, of course, is not whether the Times should be interviewing people who disagree with Biden—of course it should. But using “Trump supporters” as a default term for conservatives, and presenting them as the inevitable balance to the views of moderates and progressives (whose diverse political views are subsumed under the label “Biden supporters”) serves to mainstream a radical, far-right movement.

A mention of the president’s name in a conversation about the US’s current economic position and his student debt relief plan need not be “balanced out” by a headline dropping the name of a one-term president who lost to him two years ago, and who was barely mentioned in the conversation at all. Shoehorning Trump into conversations that don’t substantially involve him implies a false equivalence between the president and a political pretender. 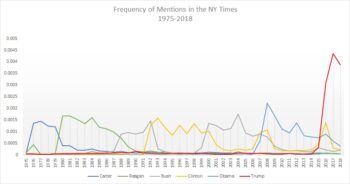 CJR (11/13/19) tracked how much more the New York Times talks about Trump than about any other recent president.

The unrelenting frequency with which Trump is mentioned in the New York Times and the US media as a whole is well-documented. During his initial bid for the presidency in 2015, Trump received 327 minutes of nightly broadcast network news coverage, while Hillary Clinton received 121 and Bernie Sanders received 20 (Tyndall Report, 12/21/15). As CBS CEO Leslie Moonves (Extra!, 4/16) said in 2016, the cult of Trump “may not be good for America, but it’s damn good for CBS.”

During his presidency, the Times mentioned Trump more than it did his predecessors during theirs. A Columbia Journalism Review study (11/13/19) found that two years after his election, “the Times talks about Trump almost three times as much as they did Obama at the same point in his term.”

Three years later, amid criminal investigations and deadly conspiracy theories, Trump has managed to continue bullying his way into the political conversation. The threat the Trump movement poses requires media scrutiny, but when it comes time to discussing policy options, the New York Times should rule out those who reject the validity of democratic elections.

ACTION ALERT: You can send a message to the New York Times at letters@nytimes.com (Twitter: @NYTimes). Please remember that respectful communication is the most effective. Feel free to leave a copy of your communication in the comments thread.

Featured Image: Caricatures of focus group participants from the New York Times‘ “Is America in a Recession? Here’s What 16 Biden and Trump Supporters Think” (9/13/22).