A lot of extremely rich people seem to be against the idea of giving money to the rest of us. In recent weeks, as the US continues to flounder amidst a surging Covid-19 epidemic, a wide range of political figures, from Bernie Sanders to Donald Trump, have come out in support of a one-time $2,000 check to Americans who make less than $75,000. 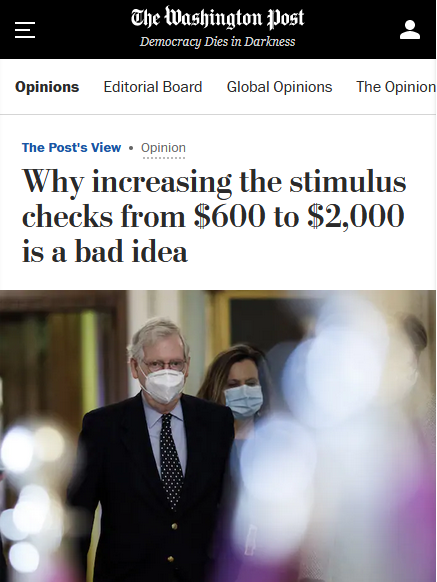 Chief among the doubters of the plan have been corporate media. A Washington Post editorial (12/29/20) denounced the project as a “bad idea” that would compound all the government’s errors from the previous nine months. As is tradition with the Post (FAIR.org, 3/8/16, 2/24/20, 4/6/20), the editorial board reserved its strongest denunciations for the independent senator from Vermont. “Especially wrongheaded in this regard is the progressive left, spearheaded by Sen. Bernie Sanders,” it wrote, scoffing at Sanders portrayal of “desperate Americans” in need of aid, because “huge amounts” would go to “perfectly comfortable families.”

They did acknowledge the need for something to be done, but advised that the money would be better spent on “longer extension of unemployment benefits, aid to state and local governments, and vaccines.” Of course, the choice on the table when the Post published its editorial was not whether to distribute money as stimulus checks or to target that money to unemployment benefits and to state and local governments, but to spend additional money on stimulus or not spend it at all. As Eric Levitz noted in New York (12/29/20):

Donald Trump is not about to force Republican senators to support federalizing unemployment insurance. It’s $2,000 checks for almost all, or inadequate aid to the poor.

Given that choice between stimulus or nothing, the Post picked nothing, concluding that the proposed relief would amount to simply “blowing nearly half a trillion taxpayer dollars.”

Apart from the matter of whether helping people keep the wolf from the door is “blowing” it,  how much is half a trillion dollars, really? The increase in wealth of the top 15 richest Americans in 2020 alone is enough to cover the entire cost of the $464 billion plan. US billionaires taken together have seen their wealth rise by almost $2 trillion in 2020, so they could fund the plan while still keeping three-quarters of their gains.

The Post’s owner (and world’s richest human) Jeff Bezos has increased his own wealth from $113 billion to $186 billion since the start of the pandemic, according to the Forbes billionaire list. While that 65% increase wouldn’t allow Bezos to pay for the stimulus by himself, he could personally mail a $300 check to every American adult and still be as rich as he was in March. He could even use his own Amazon delivery service to do it.

The Post, by the way, is in favor of $2,000 checks—for some. Last week, it announced that all its employees would be given a special $2,021 bonus for their “exceptional service through the challenges of 2020.” Two grand for me, but not for thee. 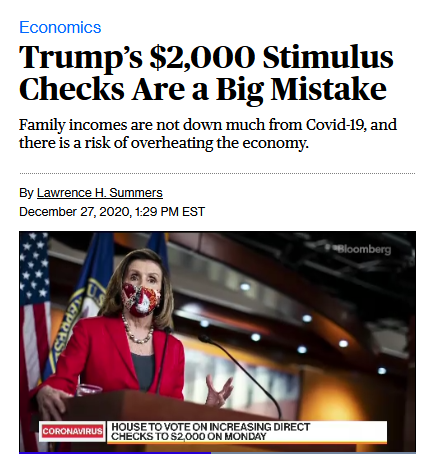 Not to be outdone, Bloomberg (12/27/20) published a bitter attack on the idea from former Treasury secretary, World Bank chief economist, National Economic Council director and Harvard University president Lawrence Summers, who warned that a $2,000 check would be a “big mistake,” as it risked “overheating the economy.” Like the Post, Summers accepted that some kind of action was necessary, writing that “victims of Covid-19 disruption can and should receive generous targeted support, as should the poor,” but suggested that $2,000 was simply too much. “There is no good economic argument for the $2,000 checks,” he categorically concluded.

The economic argument for stimulus checks, actually, is that the economy is in need of stimulus—and as US employment is still down more than 6% from where it was in February, it’s a persuasive point. Stimulus does not have to go only to the neediest to stimulate; it simply has to go to people who are likely to use it. A $2,000 boost would also help state and local governments by increasing local spending and generating sales tax revenues.

And the widely touted (though politically unlikely) alternative of expanding unemployment benefits would, in fact, miss many of the neediest people who would be helped by a broader based stimulus. As the People’s Policy Project (12/17/20) has pointed out, many of those who are currently living in poverty and food insecurity—namely, the long-term unemployed, the elderly and disabled—are ineligible for unemployment benefits, meaning that shifting the stimulus funds to that program wouldn’t help them at all.

Furthermore, the checks are already means-tested, so the bogeyman of the multi-millionaire family throwing an extra $2,000 onto their already enormous pile is a false one.

Why anyone should take anything Summers says on the economy as gospel is unclear. While Chief Economist at the World Bank, his organization pushed devastating austerity measures on much of the developing world. Summers was also one of the masterminds behind the Clinton-era deregulation of the finance sector, policies which led to the collapse of the US economy in 2008. And as head of Harvard, he took reckless risks with its endowment, moves that reportedly lost the university $1.8 billion.

Bloomberg, of course, is owned and operated by Michael Bloomberg, the world’s 23rd richest individual, and a 2020 presidential candidate held up by corporate media as the antidote to both Sanders and Trump (FAIR.org, 2/14/20). Bloomberg was endorsed by influential New York Times columnists like Thomas Friedman (11/12/19) and Bret Stephens (11/8/19). Like Bezos, he has also seen his wealth rise during a time of global economic collapse.

The Times’ heavyweight columnists, unsurprisingly, also came out against giving money directly to Americans. “We need to invest in infrastructure,” Friedman complained on Twitter (12/30/20).

We need to buttress our cities that are running out of money. We need to invest in infrastructure. But a $2,000 untargeted giveaway, in many cases to people who don’t need the help, is crazy. Can we stop and think?

Economist/columnist Paul Krugman (Twitter, 12/29/20) expressed a similar sentiment, lamenting that such a “divisive” idea was “not great policy” (as “the economics aren’t very good”), but may be politically “necessary part of selling the deal” for any aid at all. Given that the public support the idea of sending the checks by a margin of 78% to 17%, it is clear that, in this instance, Krugman is using “divisive” in its Newspeak definition, meaning “controversial among the ultra-wealthy donor class.”

The $2,000 check is indeed far from a perfect plan to help ordinary Americans, yet if it is the only plan currently on the table, many in corporate media are inclined to leave it there. “How to pay for it” is the question they perennially ask when the prospect of helping ordinary people is raised. One very simple solution would be to tax a handful of their multi-billionaire owners. Don’t expect the press to be suggesting that any time soon, however; their role is to represent their owners’ interests, not challenge them.