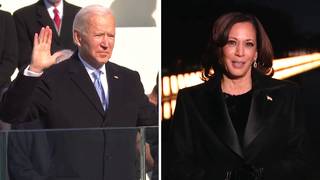 Joe Biden was sworn in as 46th president of the United States Wednesday, ending the Trump era with a call for national unity and urging Americans to come together during a period of turbulence. President Biden signed 17 executive orders in his first official act from the Oval Office, including on immigration, the pandemic and the climate crisis. Biden has promised more executive actions in the coming days. Vice President Kamala Harris swore in three new Democratic senators Wednesday afternoon, giving Democrats narrow control of the Senate and laying the groundwork for the administration’s ambitious agenda. We play highlights from the day.