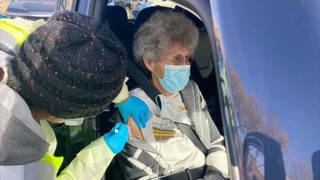 We look at the fight to save tribal elders and Native language speakers as the pandemic rips through Indian Country, with Indigenous communities facing woefully inadequate healthcare, lack of governmental support, and the living legacy of centuries of colonialism. Native Americans have died from COVID-19 at twice the rate of white people across the U.S. To combat this crisis, the Standing Rock Sioux Tribe has prioritized elders who speak the Dakota and Lakota languages to receive vaccines. “Knowing that there were a lot of elders who were at really, really high risk, this was a concern from the very beginning,” says Jodi Archambault, a citizen of the Standing Rock Sioux Tribe and the former special assistant to President Barack Obama on Native American affairs. The parents of Nola Taken Alive, a member of the Standing Rock Sioux Tribal Council, both recently died of COVID-19. “My parents were very humble people,” she says. “They played a very important role not only in my siblings’ and our family’s lives, but also to the entire community of Standing Rock.” We also speak with Alex White Plume, a former vice president and president of the Oglala Sioux Tribe of the Pine Ridge Reservation who is a Lakota interpreter.