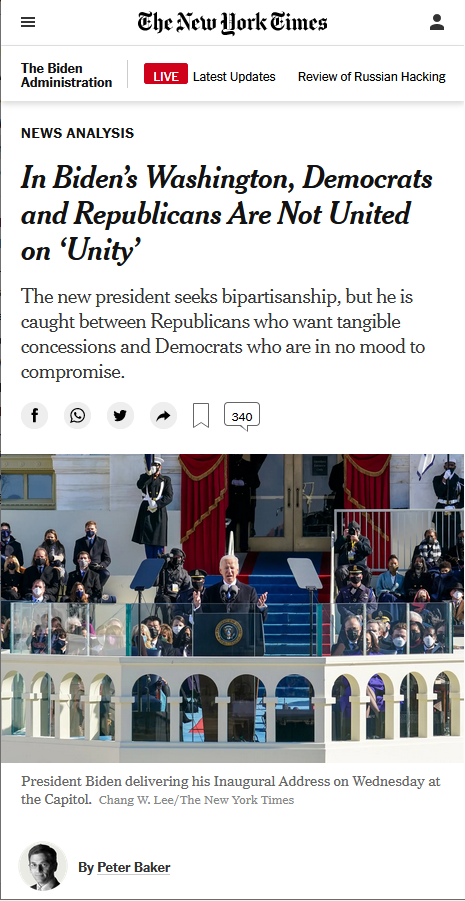 “Republicans complained that the new president’s agenda on immigration, economics and the environment advanced through executive actions and proposed legislation offered no gesture toward them,” wrote Peter Baker (New York Times, 1/21/21), who was not only alive but held a prominent job as a journalist during the Trump administration.

“In Biden’s Washington, Democrats and Republicans Are Not United on ‘Unity,’” declared the headline over a New York Times analysis by Peter Baker (1/21/21), with the subhead:

The new president seeks bipartisanship, but he is caught between Republicans who want tangible concessions and Democrats who are in no mood to compromise.

Having made clear at the outset which is the party of compromise, Baker wrote that Biden

reached out to Republicans with messages of conciliation, vowing to work together…. But in Mr. Biden’s opening hours at least, the outreach was more about words and symbols than tangible actions.

He did not appoint any members of the opposition party to his cabinet, as Presidents Bill Clinton, George W. Bush and Barack Obama did, and many of the executive orders he signed in his first two days in office were aimed at reversing Mr. Trump’s policies and enacting liberal ideas, not finding common ground. He has offered no examples of Republican priorities he was willing to adopt in the interest of bipartisan cooperation nor described what compromises would be acceptable to win congressional approval of his initiatives.

When Biden used the word “unity” in his inaugural address, that he followed it immediately by invoking Abraham Lincoln’s signing of the Emancipation Proclamation was certainly no accident; it was intended to make quite clear that “unity” does not mean “adopt the priorities of the minority opposition (which, by the way, just sought to overthrow the democratic election).” Rather, it means that we “treat each other with dignity and respect” and, crucially, that “disagreement must not lead to disunion.” And what president launches their term by describing the ways they’re going to back off their campaign promises?

But rather than judge Biden against his own claims, Baker turned the idea of unity into an open question with two valid and competing perspectives: “Biden and his allies, however, argue that unity means something different than concession—more of a change in culture, not splitting the difference on policy plans,” while

Republicans complained that the new president’s agenda on immigration, economics and the environment advanced through executive actions and proposed legislation offered no gesture toward them.

The rest of the article is structured as a back-and-forth, quoting competing claims by Democrats and Republicans, as if claims about unity coming from people like Rep. Jim Jordan (R-Ohio) and Sen. Lindsey Graham (R-S.C.), who repeatedly backed Trump’s lies about Democrats stealing the election, should be given equal time to scold the opposition for “not hav[ing] the ability or the willingness to unify us.”

The result painted exactly the narrative the GOP will work for the next two years to build: that Democrats are the ones sowing division by refusing to work together to get things done. It is the narrative the GOP—which, with a split Senate, has already made its obstructionist intentions patently clear—desperately needs in order to take back the House and Senate in 2022, and to avoid accountability for the most serious attack on US democracy in living memory. And the country’s top “liberal” paper is handing it to them on a silver platter. 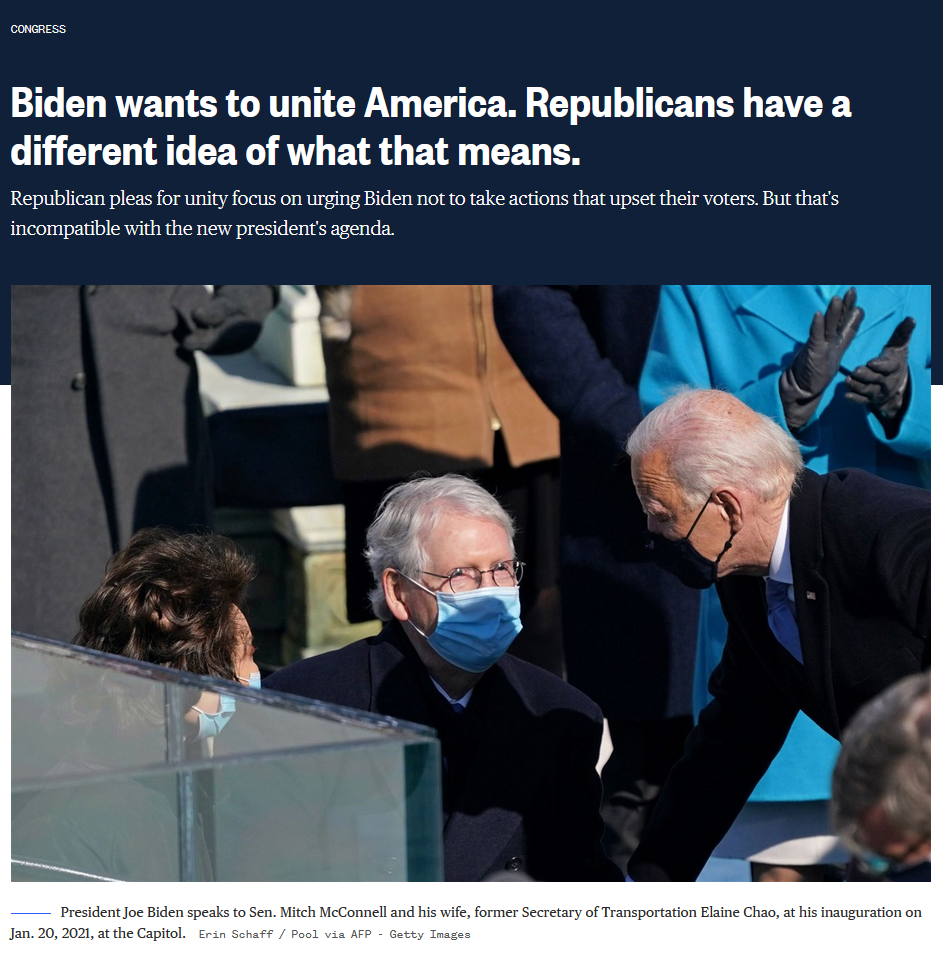 NBC‘s report (1/21/21) revolves around a Republican “vision of unity in which Biden refrains from actions that antagonize their base of voters.”

When President Joe Biden seeks to fulfill his urgent plea for unity, he will confront a dissonance between the two parties’ definitions of the word, and is likely to be forced to choose between fighting for a bold agenda and forging bipartisan agreements.

This presents “forging bipartisan agreements” as a task that can actually be accomplished through the efforts of the president alone. The piece quoted three Republicans, a former Obama adviser and a right-wing House Democrat from New Jersey, who illustrated the idea that “some Democrats believe the wiser path is moderation” by warning against letting “the far left of our party dictate our agenda.” Not a single progressive was quoted.

The opinion the furthest to the left NBC included was that of the former Obama adviser, Dan Pfieffer, who astutely noted:

There will be a tendency among many press and pundits to condense Biden’s promise to heal the soul of the nation into nothing more than appeasing congressional Republicans.

Apparently Kapur believed that including Pfieffer’s observation absolved him of essentially bearing it out.

Impeachment plays a big role in the discussion about unity. At the New York Times (1/19/21), reporter Trip Gabriel wrote, Biden “has tried to focus on his policy plans. But many of those who elected him are still fixated on his predecessor.” Noting that an impeachment trial for Trump was imminent, Gabriel predicted:

The opening chapters of the new administration are likely to be marked by tension among Democrats about how to move forward. Party institutionalists led by Mr. Biden want to hammer out deals with congressional Republicans, while the Democratic base is eager for Mr. Trump, his allies and his family members to be held fully accountable.

This is presented as if the two are incompatible—which is only true if Republicans refuse to engage with a party that demands accountability for coup attempts.