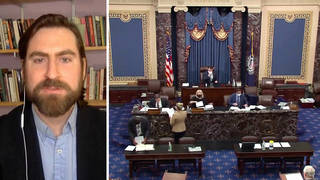 President Joe Biden has promised swift action on the pandemic, the economic crisis and more, but much of his agenda hinges on whether he can get enough support in the Senate, where an unprecedented number of bills in recent years has required a 60-vote supermajority in order to overcome filibusters. Many progressives and civil rights groups have urged Democratic leaders to kill the filibuster, warning that if they don’t, Senate Republicans will obstruct Biden’s plans just as they did with the Obama administration. Former Senate aide Adam Jentleson, author of the new book “Kill Switch: The Rise of the Modern Senate and the Crippling of American Democracy,” says the filibuster has historically been used to stop racial progress and thwart majority opinion. “The framers … did not want the filibuster to exist,” he says. “When they created the Senate, it was an institution that had no filibuster power. It was designed to be a majority-rule body.”