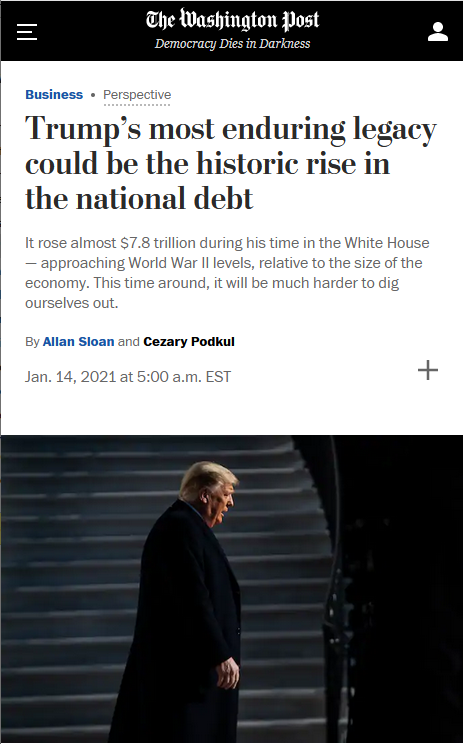 If raising the national debt is “Trump’s most enduring legacy,” as the Washington Post (1/14/21) suggests, then it follows that in order to reverse that legacy, President Joe Biden will have to reduce the debt.

A Democrat has assumed office, and so, like clockwork, corporate media are here to play their favorite game of pretending to suddenly be deeply concerned with the deficit and the national debt. Debt has risen sharply after a Covid-induced economic crash and rounds of enormous Trump tax cuts (the last of which gave 82% of the benefits to the richest 43,000 Americans, while only 3% went to those earning less than $100,000 per year). While media had little problem with those tax cuts as they were happening (FAIR.org, 2/28/18), the party is now over, and it’s apparently time for austerity.

The Washington Post (1/14/21) led the fearmongering in a piece co-produced with ProPublica, warning that the “immense” debt was “approaching World War II levels,” but that, “This time around, it will be much harder to dig ourselves out.” Throughout the article, reporters Allan Sloan and Cezary Podkul also linked the debt crisis to Social Security and Medicare programs, insinuating that these need to be drastically cut, even though Social Security by law can only spend money from its own dedicated tax stream (or money from that stream borrowed by the Treasury and returned with interest), and so can never make a net contribution to the national debt (FAIR.org, 2/28/17).

Fortune (1/14/21) went even further, claiming that the US is now in a similar debt position to Italy, “the most worrisome basket case among Europe’s major economies.” It uses scare words such as “gigantic debt,” “ever-rising mountain,” “gamble,” “gigantic risk,” “staggering $3-trillion-plus deficit” and “mushroom[ing]” to describe the US’s new problem. Not to be out-sensationalized, Business Insider (1/17/21) insisted that “America’s soaring national debt is a looming disaster.”

“Dear Joe Biden: Deficits Still Matter,” was the Financial Times’ response (1/20/21), with Morgan Stanley’s Ruchir Sharma claiming that, “as vaccines roll out and normalcy returns, injecting more stimulus into a recovering patient is likely to do more harm than good.” “There is no free lunch,” he wrote. “The path to prosperity cannot be so easy as to just print and spend,” he added, claiming that further government spending will actually cripple growth and increase inequality. 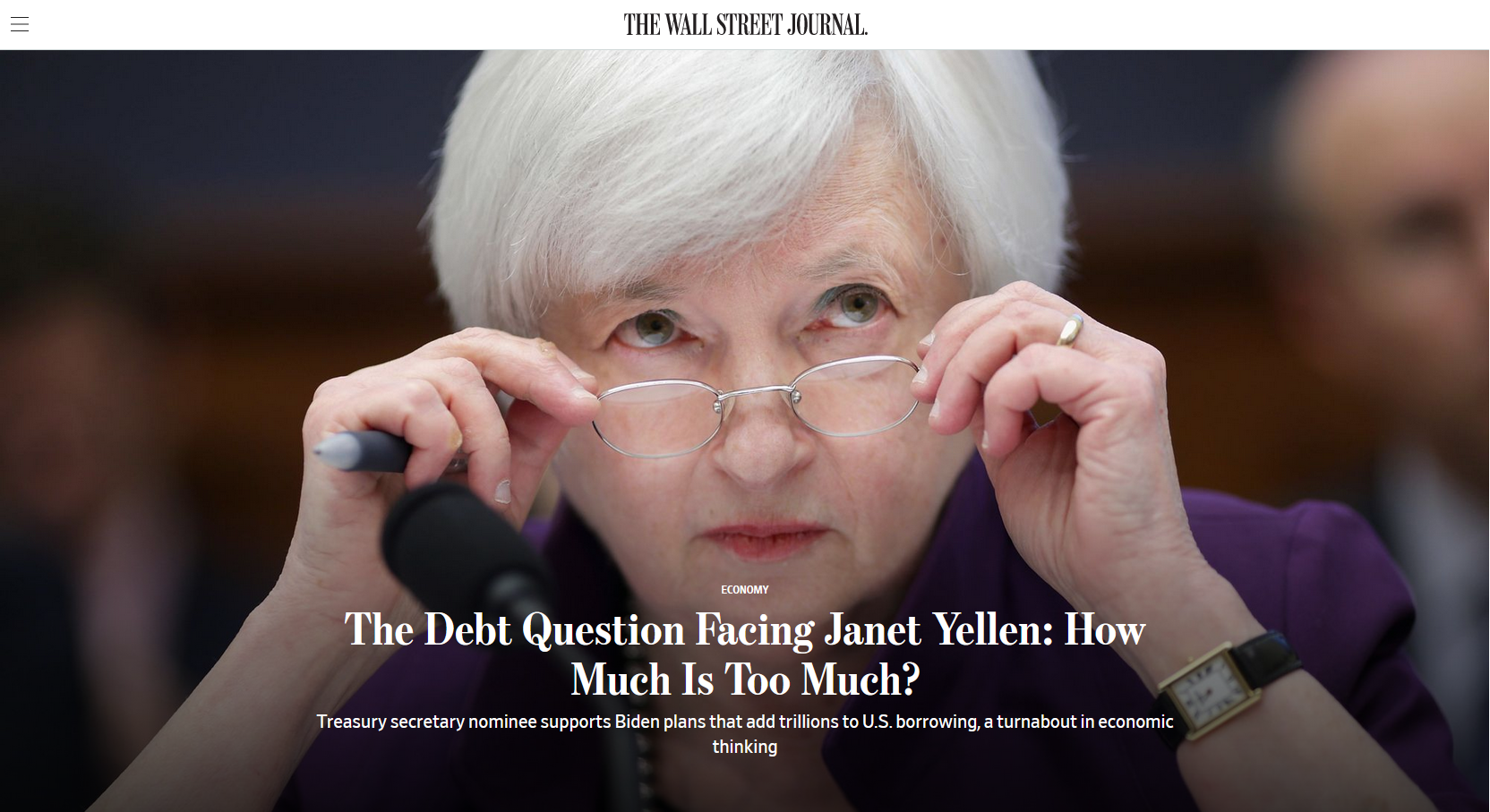 The Wall Street Journal (1/18/21) warns that the US “debt already exceeds the annual output of the economy, putting the US in company with economies including Greece, Italy and Japan.”

The Wall Street Journal (1/18/21) was also suddenly as worried. “How much [debt] is too much,” it asked, wondering if “there is a ceiling on the US’s debt load and how the country will pay it back.” One source described Biden administration plans as “gluttony.” Other outlets expressed their new concern for the rising figures (e.g., Raw Story, 1/14/21; Fox Business, 1/19/21; CNBC, 1/21/21)

The Detroit News (1/11/21) spelled out what it wanted to see to combat what it considered the “out of control” spending: “Develop a balanced budget amendment like those already in place by 49 of the 50 US states.” Given the economic crisis the country is in, this would mean drastic cutbacks in government programs keeping people alive through the pandemic, and likely no stimulus at all.

It is unclear whether Biden will listen to the deficit hawks, but he should be used to this by now. As he and President Barack Obama assumed office during an economic crisis, media pretended to be greatly concerned with the debt and the deficit, trying to foment a nonexistent public outrage with the problem (FAIR.org, 6/18/10, 6/24/10). The Washington Post (5/19/10), for example, led a story with the words:

With voters up in arms over the mounting federal debt, congressional Democrats are growing increasingly queasy about adding to the nation’s tab, with some arguing that additional spending to prop up the economy and help the unemployed should be paid for or abandoned.

In reality, polls showed that the public considered the debt a secondary or minor issue.

The debt then, as now, was caused principally by a sustained economic shock, Republican tax cuts and gigantic military spending. Yet a FAIR study (9/11/11) of six months of ABC World News, CBS Evening News and NBC Nightly News broadcasts covering the deficit or debt found that only three segments mentioned any of these causes at all, even in passing.

Likewise, the same corporate media who feigned outrage at Bernie Sanders’ pro-public spending ideas, questioning how America could ever afford such lavish proposals as universal healthcare or student loan forgiveness, were uniformly silent when the Trump administration decided to add $81 billion extra onto the military budget that already rivaled that of all other nations combined (FAIR.org, 11/21/17). 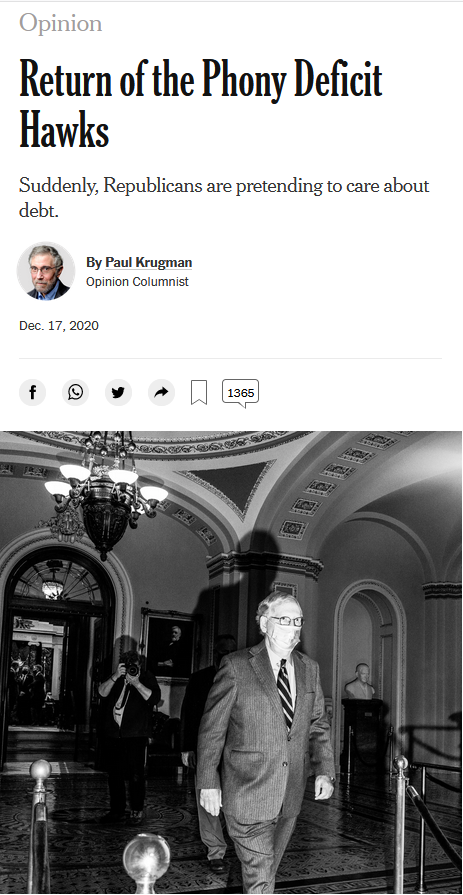 The New York Times‘ Paul Krugman (12/17/20) points out that “the real interest rate on U.S. debt—the rate adjusted for inflation—has lately been consistently negative, which means that the additional debt won’t even create a major future burden.”

There is some dissent to the austerity orthodoxy in corporate media, perhaps most prominently economist and New York Times columnist Paul Krugman, who has long argued against the phony deficit doom-mongering (e.g., New York Times, 2/4/10). “We know what’s going on here,” he wrote last month (12/17/20), predicting what was coming. Republicans are “clearly getting ready to invoke fear of budget deficits as a reason to block anything and everything Biden proposes once he’s finally sworn in.” Once again, they have found an ally in even nominally liberal media outlets.

With Biden’s spending plan aimed at providing direct aid to people and necessary support to vital services and institutions, the relief package is far from frivolous. Furthermore, as the Center for Economic and Policy Research co-founder (and FAIR regular) Dean Baker (Beat the Press, 1/13/21) has noted, rock-bottom interest rates make these debts particularly straightforward to pay off in the future. Without  relief, we will see sustained decreases in living standards for ordinary Americans.

Ultimately, however, that is the point of deficit hawkery: to scold and scare readers into accepting cuts to welfare and public services that are of no use to the wealthy. While they curiously have little problem with Republicans running deficits to suit their wealthy constituents, as soon as a Democrat is elected, media move to neutralize the threat that any progressive legislation might be enacted on behalf of the people.