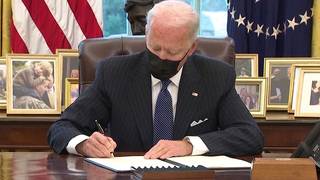 President Joe Biden has signed an executive order repealing the Trump administration’s ban on transgender people serving in the U.S. military and ordered the Pentagon to review the files of troops who were forced out because of the ban and to immediately halt discharges of transgender troops now serving. Chase Strangio, deputy director for transgender justice with the ACLU’s LGBT & HIV Project, calls it “an incredibly important development,” but warns the attack on transgender rights is continuing at the state level, with a raft of new legislation targeting trans people in education, healthcare and more. “We have this significant backlash to the very notion that trans humanity is going to be recognized,” says Strangio. “It is truly painful to hear a movement that essentially, at its core, believes that being trans is wrong and should be eradicated.”