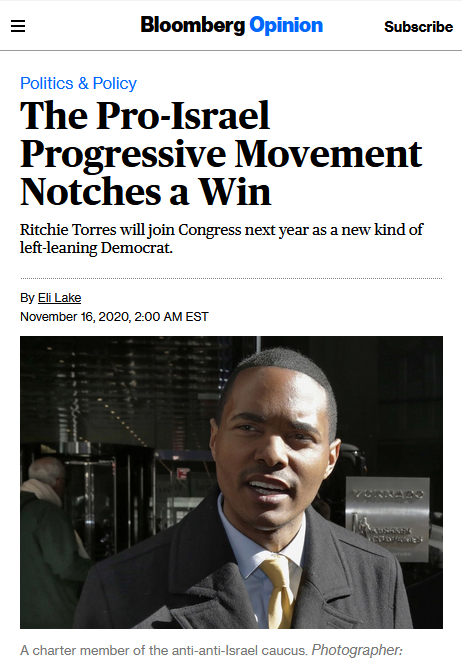 Corporate media are having a field day with the ascendance of Rep. Ritchie Torres, a Democrat from New York City. The image we see repeated across outlets is that he is a new kind of progressive: a young Black gay man from the Bronx, he stands as an alternative to the rise of democratic socialism. In particular, he is offered as a pragmatist, rather than an idealist, and above all, he’s aggressively pro-Israel.

Media sources (New York Times, 6/11/20; City and State, 8/23/20) anointed Torres as the Goldilocks candidate in a complicated open Democratic primary last year: He was well to the left of the conservative and anti-gay Ruben Diaz, Sr., but more palatable to the Democratic establishment than socialist Samelys Lopez. Now representing the Bronx along with two socialists who have bucked the pro-Israel consensus, Alexandria Ocasio-Cortez and Jamaal Bowman, Torres continues to brand himself as an alternative that the establishment can trust, and media are going along for the ride.

He downplayed his non-association with the socialist contingent, telling WNYC/Gothamist (12/31/20) that he refuses “to be defined in relation to someone else,” and that he wants to be “defined on my own terms, based on my own story and my own record.” He told Jewish Insider (12/5/19) that a 2015 trip to Israel helped inspire his belief that anti-Zionism is antisemitic. (This would make a great many Jews antisemitic, by the way.) 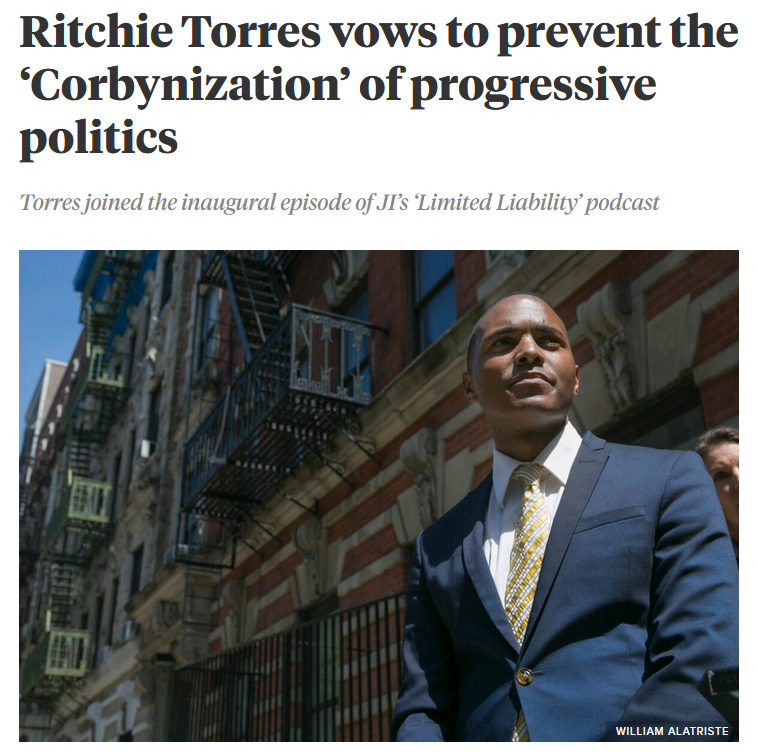 Torres told Jewish Insider (1/15/21) that “you can run as a pro-Israel, pragmatic progressive without catering to the extremes.”

He later told Jewish Insider (1/15/21) that a “few demagogues [can] pump antisemitic poison into the bloodstream of a political party,” and that he wants to “resist the Jeremy Corbynization of progressive politics in the United States.” It’s a reference to the idea that former British Labour Party leader Jeremy Corbyn allowed antisemitism to fester in the party, which Corbyn’s defenders call a politically motivated accusation designed to steer Labour to the right (Jacobin, 10/29/20).

This framing of a left-wing critique of Israel as “antisemitic poison” is line with the impulse to take a misleading “both sides” approach to antisemitism: Sure, on the right, literal armed Nazis are storming the Capitol, but politicians and media alike feel the need to equate that with left-wing lawmakers getting too vocal about Palestinian human rights (FAIR.org, 11/6/18).

The coverage of Torres’ Israelophilia is also unbalanced. For example, in the New York Post piece, he says: “I remember meeting a family in Sderot. And I had no concept of what it was like to live in a city that lives under the fear of rocket fire.” But here’s a fact he leaves out about that Israeli city: It is where Israelis infamously gathered in 2014 to watch rockets rain down on Gaza as if it were a sporting event (New York Times, 7/14/14). There are two sides to the terror and to the hatred in the conflict, and Torres missed half the lesson. Worse, Torres doesn’t appear to get questioned about it.

Certainly, a progressive politician in the United States might be interested in like-minded, progressive lawmakers and activists abroad. But his appearance last summer for an LGBT event with the Israeli embassy, alongside former Israeli Ambassador Ron Dermer and Israeli Defense Force Lt. Col. Dana Ben-Ezra, is an example of support for Israel’s right-wing government that is hardly in line with Torres’ stated domestic agenda. There are numerous organizations in Israel that organize against discrimination and offer services for LGBT people. Standing with them would, indeed, be progressive. But doing public relations for Israel’s current right-wing leadership very much isn’t. Who in his constituency or the progressive Democratic base benefits from this? The media covering his “progressive but pro-Israel” image ignore this contradiction. 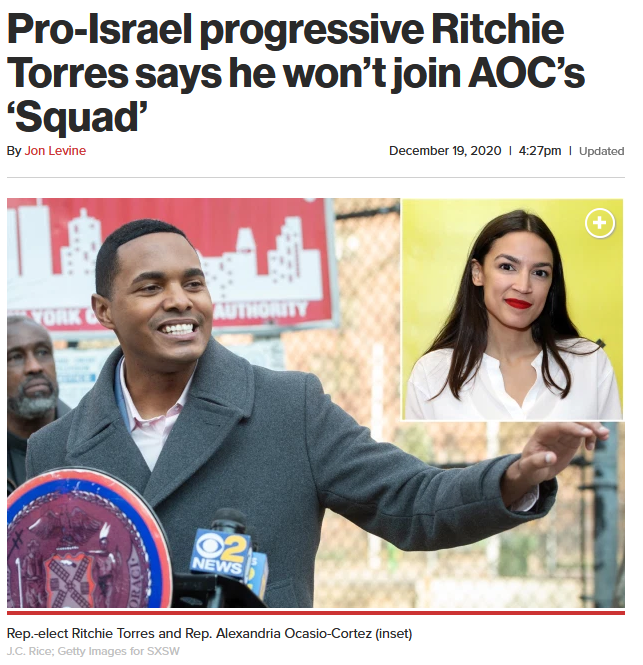 Torres told the New York Post (12/19/20) that he saw “his strong support for Israel as a primary distinction” between democratic socialists and “true progressives.”

Some of the coverage of Torres’s pro-Israel advocacy, like the New York Post piece (12/19/20), pays lip service to the other side of the issue: Yes, he supports a two-state solution and believes in addressing the rights of Palestinians, and, as he told Jewish Insider (12/5/19), it’s OK to criticize Israel as long as you don’t threaten to cut aid or “delegitimize” the state, especially by backing boycott campaigns meant to highlight the second-class status of Palestinians living under occupation.

What Torres and his media cheerleaders miss is that such existential questions about Israel’s treatment of Palestinians, and the legitimacy of the current government, are at the heart of the nation’s own discourse. The country’s leading human rights group, B’Tselem, declared recently “that the entirety of Israel should be considered an apartheid state” (Jewish Telegraphic Agency, 1/14/21). Street protests against the right-wing prime minister are more than half a year old (Ha’aretz, 1/16/21). Israel’s main political opposition leader has said he is open to an alliance with the Joint List, a coalition of Arab parties and the left-wing Hadash party (Middle East Monitor, 1/18/21). Sixty Israeli teenagers have refused military conscription this year, citing the Israeli occupation of Palestinian territories (Ha’aretz, 1/5/21).

One would think that on the question of Israel’s future, a progressive would be aligned with these forces rather than the current leaders of the state. But US media’s concept of Israeli politics is woefully unnuanced: You either support Israel, or your criticism veers into pro-Palestinian extremism. A realist might conclude that Torres is taking advantage of that media myopia, branding himself as a pro-Israel lawmaker in order to seek funding opportunities in the future.

At first glance, Torres comes into Congress with a fairly progressive platform. For instance, he has voiced support for the Green New Deal and told one progressive LGBT Democratic club that he’d support “universal healthcare, including the availability of Medicare for all,” as long it had the support of organized labor and wouldn’t result in healthcare job losses in the Bronx. 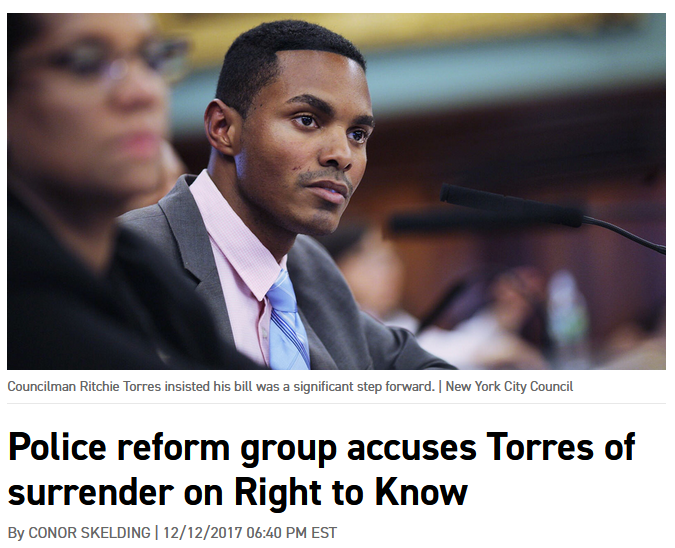 A police reform advocate (Politico, 12/12/17) called Torres’ watering down of a police ID bill a “dishonorably crass political move”—which Torres rejected as the complaints of a “fanatical few.”

But missed by much of the media branding is his time as a City Council member, where he often found himself as a compromiser on hot button issues. On police violence, it’s true that he’s taken heat from cop advocates—the sergeants union once tweeted that he was a “first class whore” (Gay City News, 9/4/20), the kind of vitriol that can be a badge of honor for police reformers. But advocates of reform have also accused him of “surrendering to the mayor and police department” (Politico, 12/12/17)—with more substance to back up their criticism.

At issue was Torres’ role in the Right to Know Act, a set of proposals to promote transparency and accountability in the New York Police Department. As the Center for Constitutional Rights explained, “at the very last minute,” Torres, a sponsor of one of the key bills, “pulled the version supported by [more than 200] community groups” and put forth a “compromise version backed by the NYPD and the mayor which effectively removed the key provisions of the bill.” The group said Torres helped craft an exception that excused “officers from showing their ID in a vast majority of encounters.”

While “defund the police” became a battle cry for the 2020 Black Lives Matter movement, Torres was quoted in the  New York Post (12/19/20) saying the phrase was “arbitrary and irresponsible.” 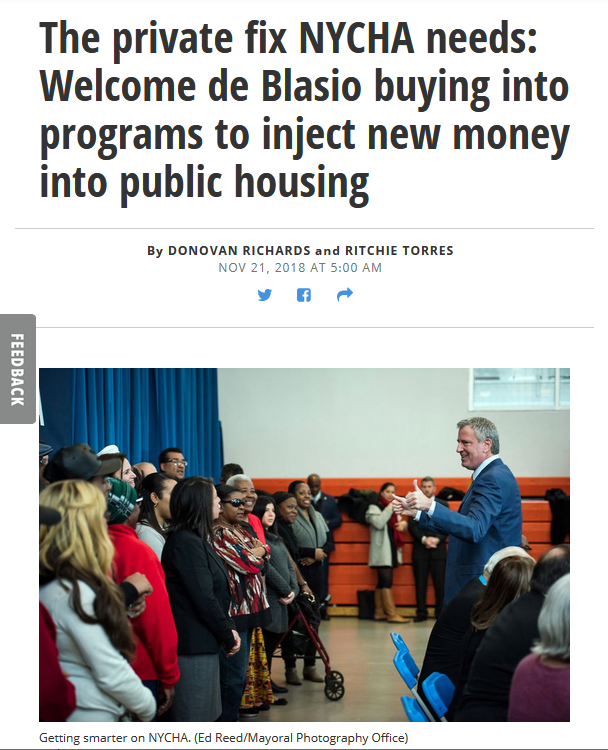 While fair housing has been his key city issue, Politico (10/1/19) reported that his congressional campaign received cash from “executives at a contracting company with a history of wage theft allegations and safety violations,” and The City (10/21/19) found that his campaign took in more $100,000 in real estate industry contributions. Campaign finance records also show that he took money from the pro-Israel group NorPAC, as well as Elliot Management, the hedge fund of Paul Singer, who mostly gives to Republican candidates (Intercept, 10/15/20). One Democratic Socialists of America chapter (Twitter, 6/18/20) called out Torres for accepting money from Bradley Tusk, a venture capitalist who also was campaign manager for Michael Bloomberg’s controversial third mayoral run.

The Trump administration in 2018 signed a “massive expansion of a controversial program called Rental Assistance Demonstration, or RAD, which privatizes public housing” (Intercept, 4/2/18). Torres co-wrote an op-ed (Daily News, 11/21/18) in favor of this program, and City Limits (11/19/15) covered his embrace of privatization more than five years ago. The New York Post (8/29/18), in a pro-privatization editorial, praised Torres for pushing the public housing authority management to seek more discipline against its workers.

Despite the media hype, Torres not joining AOC’s Squad is not a case of a fellow progressive challenging the group’s pro-Palestine position, but rather a politician considerably to their right declaring that he is much more at home with the Democratic establishment. The media should be honest about that, rather than making him out to be an iconoclast that he isn’t.