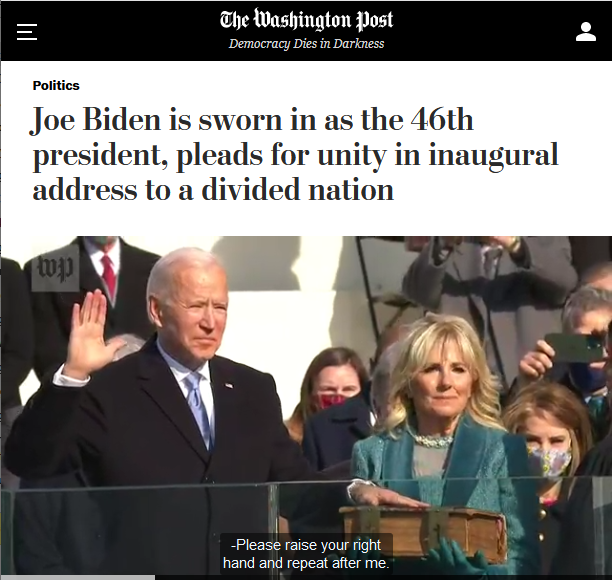 “Democracy has prevailed,” President Joe Biden said in his inaugural address, reflecting a theme of normalization that the longtime Washington insider sought to portray throughout the day’s pageantry. His aim, according to the Washington Post’s coverage (1/20/21), was to prove with his administration that “the past four years represented an aberration rather than an enduring rift in the national fabric.”

(Textile imagery was popular in the inauguration coverage; the New York Times—1/20/21—referred to Trump’s time in office as “four tumultuous years that tore at the fabric of American society,” while Associated Press said, “Biden warned that the fabric of the nation’s democracy was tearing but could be repaired”—1/20/21.)

Livestream news coverage was full of references to the white nationalist siege of the Capitol on January 6—but in the rearview mirror, as an isolated instance unconnected to the last four years of rising right-wing violence, let alone the 400 years of racist violence that Biden gave a nod to in his speech. The Washington Post (1/20/21) said this about the relationship of the two events: “The decision by Biden and Harris to still take their oaths of office outside and at the Capitol was itself an act of defiance in the aftermath of the hours-long riot.”

“Defiance” made possible by a show of force: 25,000 National Guard troops, thousands of police officers, miles of fencing and razor wire, a city and its halls of government quite literally occupied.

Media found it “surreal” (New York Times, 1/20/21), “evocative of a war zone” (AP, 1/20/21) and contributing to an inauguration “unlike any other” (CNN, 1/21/21)—but none of them had the courage or clarity to say that military occupation is hardly the sign of a rebounding democracy. Indeed, the scandal of warehousing troops in a parking garage (here, for instance) got way more ink than the fundamental contradiction of a democratic government needing war-zone level protection from its own citizens.

The corporate media’s untroubled response to the military and (so-called) law enforcement presence at the inauguration reflects a deeply rooted bias that comes from their collective alignment with the ruling class; that is, segments of society whose interests are served by police and military forces. In the US specifically, policing is rooted in the genocide of Indigenous peoples, the subjugation of Africans and African-descended people, and the repression of workers’ movements. But the default reflex among corporate media, in step with the dominant US narrative, is to see cops and soldiers as good guys, and their presence as benign and reassuring. Even if, as in this case, that presence also seems odd, it still does not seem ominous. This bias creates multiple blind spots, and forecloses accurate analyses of events in which these forces play a central role. 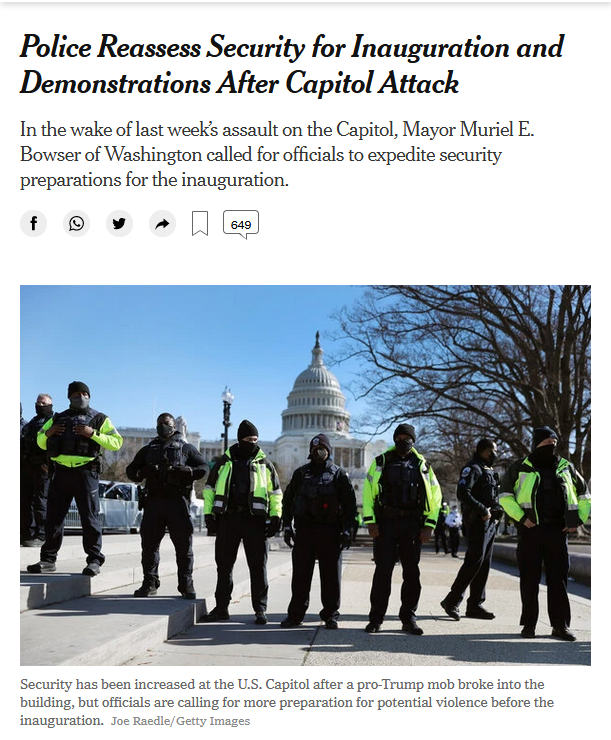 “Security has been increased at the U.S. Capitol” since the January 6 insurrection, reported the New York Times (1/10/21), “but officials are calling for more preparation for potential violence.”

The troops, the police and the razor wire were there on January 20, of course, because of the white nationalist insurrection on January 6. Coverage of that event was framed primarily through a “security” lens. The New York Times (1/10/21) called it “one of the most stunning security lapses in the city’s history.” “How could security forces in the nation’s capital be so swiftly and completely overwhelmed by rioters who stated their plans openly on a range of social media sites?” NPR (1/15/21) asked in a typical analysis piece.

The Washington Post’s report (1/7/21) the day after the siege, “Capitol Breach Prompts Urgent Questions About Security Failures,” highlights the analytical problems that flow from the benign assessment of law enforcement. “The storming of the US Capitol by a mob of President Trump’s supporters on Wednesday was a disastrous failure of security” it declared, and went on:

In a city on high alert, in a building with its own 2,000-officer police department, people forced their way into the sanctums of American democracy with nothing more than flagpoles, riot shields and shoves.

So, first of all, the people who forced their way in the sanctums of American democracy also brought guns, body armor and military-grade tactical gear. They brought their own gallows and zip ties and called for the execution of the vice president and the speaker of the House. Oh, and they planted two pipe bombs at the DNC and RNC.

The article went on to say, “It appeared the US Capitol Police and other agencies had failed to anticipate the size and intentions of the crowd.” As did the Post, apparently even after the fact, judging by the “nothing more than” assessment in their lead.

Misjudgment of the insurrectionists’ intentions was repeatedly cited in the media coverage. That’s appropriate, as it is accurate reporting of officials’ assessments and statements. The problem is in the analysis of these official pronouncements. Thinking that a bunch of white men who have said they were coming to the Capitol to overturn the election was not a threat is not a security problem—it’s a white supremacy problem. In failing to say that, media reinforce the problem.

As journalists themselves pointed out, had this been a Black Lives Matter protest, the police response would have been quite different. (See, for instance, “Lafayette Square, Capitol Rallies Met Starkly Different Policing Response”—Washington Post, 1/14/21.) Yet missing from the corporate coverage was any acknowledgement that such differential treatment is a product of white supremacist assumptions, and that these same assumptions are what led to the “stunning” security lapses.

In this context, it is also worth noting that the insurrectionists were ubiquitously referred to as “Trump supporters,” which of course they were, but were rarely characterized in any other collective terms, especially in the early coverage. A round of coverage after the initial news cycle—e.g., “Decoding the Far-Right Symbols at the Capitol Riot” (New York Times, 1/13/21) and “Identifying Far-Right Symbols That Appeared at the US Capitol Riot” (Washington Post, 1/15/21)—described some of the involved organizations as white supremacist, white nationalist or racist, but backed away from naming the siege itself as a white nationalist or fascist attack, both of which are accurate—and analytically important—descriptions.

revealing an alternate political universe where violent extremists, outright racists and conspiracy theorists march side by side with evangelical Christians, suburban Trump supporters and young men who revel in making memes to “own the libs.”

Uniting them is a loyalty to Mr. Trump and a firm belief in his false and discredited insistence that the election was stolen.

The paper of record here refuses to analyze the insurrectionists as a whole, and makes the whole thing sound like some sort of right-wing festival.

Meanwhile, a 2,000-word New York Times article three days later (1/16/21) about the “network of far-right agitators across the country” that organized people and funding for the January 6 siege didn’t just fail to discuss, even in passing, the white supremacist ideology shared by these groups; it also manages to turn the piece into yet another sympathetic profile of Trump supporters (FAIR.org, 2/15/17, 7/14/19 11/16/20); in this case of Keith Lee, described first as “an Air Force veteran and former police detective,” and later in the article as “a sales manager laid off at an equipment company because of the pandemic.” 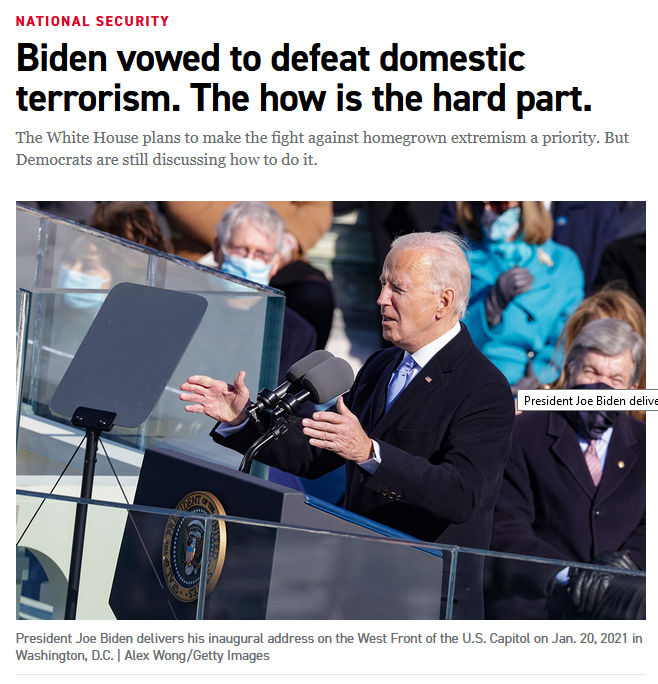 Having misdiagnosed the siege of the Capitol as a security problem, media went on to report uncritically on the increased security that was the primary response. Politico (1/20/21), for instance, said, “Current and former officials agree that there needs to be some kind of NSC-driven process to address the rising threat.” The story was framed entirely by this security lens, with references to increased personnel, “new legal tools” and cybersecurity initiatives.

It’s worth asking how increasing the scale of repressive government tactics—from police and military presence to a new round of surveillance and expanded law enforcement powers—will effectively combat a movement built on the same anti-democratic values. But since media don’t see the military and police this way, such an interrogation is impossible for them, and is nowhere to be found in the aftermath of the January 6 attack.

Current and former police and military members made up a disproportionate part of the insurrectionists, and the National Guard removed 12 people from the inauguration security because of their extremist views. The Venn diagram of white nationalists and military and law enforcement personnel has always had a significant overlap. Equally importantly, these institutions function structurally to reinforce white supremacy. All of this makes the increased security response to the Capitol siege seem ineffective, at best—and, at worst, actively enabling further right-wing attacks.

Though individual articles mentioned the Capitol Police members who let the insurrectionists past barriers and the one who took a selfie with them, you’ll search in vain for corporate media articles about the larger question of whether white-supremacist sympathetic forces can thwart white supremacist violence.

By contrast, Prism (1/19/21), self-described as “a BIPOC-led nonprofit news outlet that centers the people, places and issues currently underreported by national media,” reported on abolitionist perspectives on the siege, and raised the question, “Would the breach at the Capitol…have happened without police?”

I, for one, think Audre Lorde’s reminder, that the master’s tools will never dismantle the master’s house, is germane here.

The call is coming from inside the house 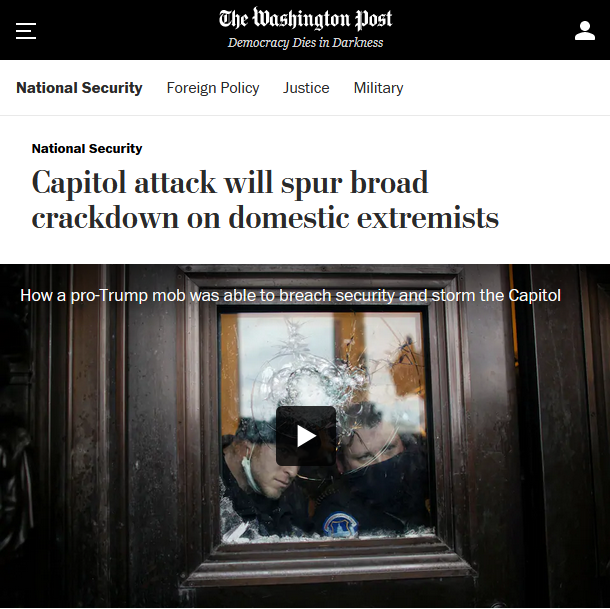 The headline’s euphemistic reference to “domestic extremists” (Washington Post, 1/23/21)–with no suggestion as to what such extremists might believe–is a hint of how broad the crackdown might end up being.

The Washington Post’s “Capitol Attack Will Spur Broad Crackdown on Domestic Extremists” (1/23/21) was similar to other pieces on this topic, mainly cataloguing law enforcement–oriented ideas in response to the threat of right-wing violence. It also exemplified the seeming surprise with which media covered the white nationalist movement that organized the insurrection. It began:

The storming of the US Capitol on January 6 crystallized for national security officials that violent extremism is not a threat exclusively imported from foreign shores; it is made in America.

It went on explain that across the country, “police officers and firefighters, realtors and bartenders, even public officials” espouse racist views and extremist tactics. The Post managed to make well-established facts sound like a revelation, thereby again underscoring the fundamental truth that in the dominant US narrative, white nationalist violence is incomprehensible as a threat, even though it is constantly before our eyes.

As long as that narrative shapes our media culture as well as our government, we can expect right-wing extremism to continue to flourish alongside structural white supremacy. All that remains is for someone to call for unity and healing for our national fabric, so everything can return to normal.