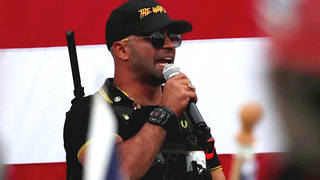 We speak with Reuters investigative journalist Aram Roston, who has revealed a leader of the extremist hate group the Proud Boys, which played a key role in the Capitol riot on January 6, has a prolific history of cooperating with law enforcement. Court records show Enrique Tarrio was an FBI and police informant in Florida who went undercover in multiple drug and illegal gambling investigations after he was arrested in 2012. This comes as the Department of Homeland Security warns of a heightened threat posed by “ideologically-motivated violent extremists” angry over Joe Biden’s inauguration.