As the fight over the direction of the Biden administration’s antitrust policy intensifies, a new figure has entered the fray, scrambling the calculus: Attorney General nominee Merrick Garland. The battle so far has largely been fought out between lobbyists for Big Tech and their allies on the one hand and skeptics of monopoly power on the other.

But according to three sources familiar with the discussions, Garland is hoping to install as the head of the Department of Justice antitrust division a longtime aide who served under him during the Clinton administration and who later was the attorney charged with shepherding his ill-fated Supreme Court nomination. That lawyer, Susan Davies, however, would be a controversial pick for another professional connection of hers: Facebook. The sources for this story are unable to speak on the record for fear of angering the Biden administration, which has not authorized those involved in the discussions to speak publicly.

In 2012, Davies represented Facebook in a lawsuit brought by an advertiser, Sambreel Holdings LLC, that was effectively kicked off Facebook’s platform after the tech giant lured away all its clients and banned users from downloading it. In December, the Federal Trade Commission launched an antitrust suit against Facebook, looking to break it into its component parts and ban it from the type of anti-competitive behavior Davies defended as its counsel.

The Justice Department is also suing Google, a case filed just ahead of the Facebook prosecution. The outcome of those twin antitrust efforts will be a major hinge point not just in technology policy but in the power of the government to take on consolidated power centers that are distorting markets across industries. To have the head of the antitrust division recused from one of those cases would create an odd state of play. The rest of Davies’s client roster, meanwhile, is equally worrying to opponents of concentrated power, as she has spent most of the last decade working on behalf of major mergers, fending off antitrust enforcement, and, as her law firm bio puts it, “frequently interact[ed] with regulators and policy makers on behalf of corporate clients.” The ascension of Davies and the intervention of Garland comes at the expense of Renata Hesse, another leading candidate for the top position at the antitrust division.

Garland is a charter member of the Washington legal establishment and is looking to populate the Justice Department with lawyers who’ve beaten similar paths: from the Ivy League to a Supreme Court clerkship to corporate work to government work and back. That’s likely to produce smart and well-qualified candidates and in some areas of the Justice Department could serve the government well enough. But when it comes to antitrust enforcement, the framework in place during the Obama years proved to be insufficient to the task of slowing or reversing consolidation across sectors. Simply installing talented members of the legal establishment will lead to the same failures without a serious rethinking of antitrust policy.

Davies first worked under Garland in the Clinton administration’s Justice Department, where Garland served as a deputy assistant attorney general. Garland was nominated to the federal bench by President Bill Clinton, and Davies left for a clerkship with Supreme Court Justice Anthony Kennedy, followed by a stretch at the corporate law firm Sidley Austin LLP, before returning to the Clinton-era DOJ as a top lawyer in the antitrust division.

From there, she became general counsel and chief intellectual property counsel for the Senate Judiciary Committee, where then-Sen. Joe Biden was a former chair and remained a high-ranking figure. When the Obama administration took over, Davies was put in charge of selecting and vetting federal judicial nominees, a process that resulted in a remarkable tilt toward corporate attorneys. One study found that just 4 percent of President Barack Obama’s picks came from a public-interest background. In 2011, she again left for the private sector, becoming a partner at the right-leaning firm Kirkland & Ellis LLP — at one point home to Robert Bork, a conservative legal scholar and rejected Supreme Court nominee; Kenneth Starr, best known for his role as independent counsel during Clinton’s impeachment and who has now joined President Donald Trump’s impeachment team; conservative Supreme Court Justice Brett Kavanaugh; John Bolton, a former national security adviser for Trump; Alex Azar, Trump’s secretary of health and human services; and Trump’s Attorney General William Barr — where she defended giant companies against antitrust enforcement, shepherding some of the largest mergers of the past decade and playing a major role in the consolidation crisis that Biden’s antitrust division will be tasked with unwinding.

“Competition policy, properly understood, is more than just beefing up antitrust enforcement. It also entails policing anti-competitive conduct outside of an antitrust courtroom.”

Anti-monopoly reformers are still hoping that Jonathan Kanter, a plaintiff’s lawyer who assisted in the cases against Facebook and Google, can get a shot at the position. He’s being talked about seriously enough that Big Tech and its allies have begun working in opposition to his appointment, sources familiar with the planning but unable to speak due to the likelihood of professional reprisal said.

One dark horse may be Jon Sallet, another Obama-era antitrust division veteran who later worked as a top counsel to former Federal Communications Commission Chair Tom Wheeler. Though a former telecom lobbyist, Wheeler did complete groundbreaking net neutrality regulation, and Sallet helped navigate that terrain. Afterward Sallet joined a think tank and wrote a short paper titled “Louis Brandeis: A Man for This Season.” Brandeis is something of a patron saint for the nascent anti-monopoly movement, and in this paper, Sallet calls for decisive, Brandeisian action to take on monopoly power.

Several sources working on the nominations described Sallet as a “Janet Yellen figure” who would make almost everyone in the fight somewhat happy despite his connections to some of the disappointing antitrust policies of the past.

At any rate, Sallet doesn’t carry the baggage that someone who worked directly for Big Tech might. Hal Singer, managing director at Econ One, a litigation consulting firm, noted that Biden’s team would have to police monopoly power across the economy, and someone coming out of the tech world may be unwilling to subject a prior employer to that. “Competition policy, properly understood, is more than just beefing up antitrust enforcement. It also entails policing anti-competitive conduct outside of an antitrust courtroom,” Singer said. “President Biden’s picks must not only have expertise in the field but the experience to understand this critical distinction and the willingness to break from the past.” 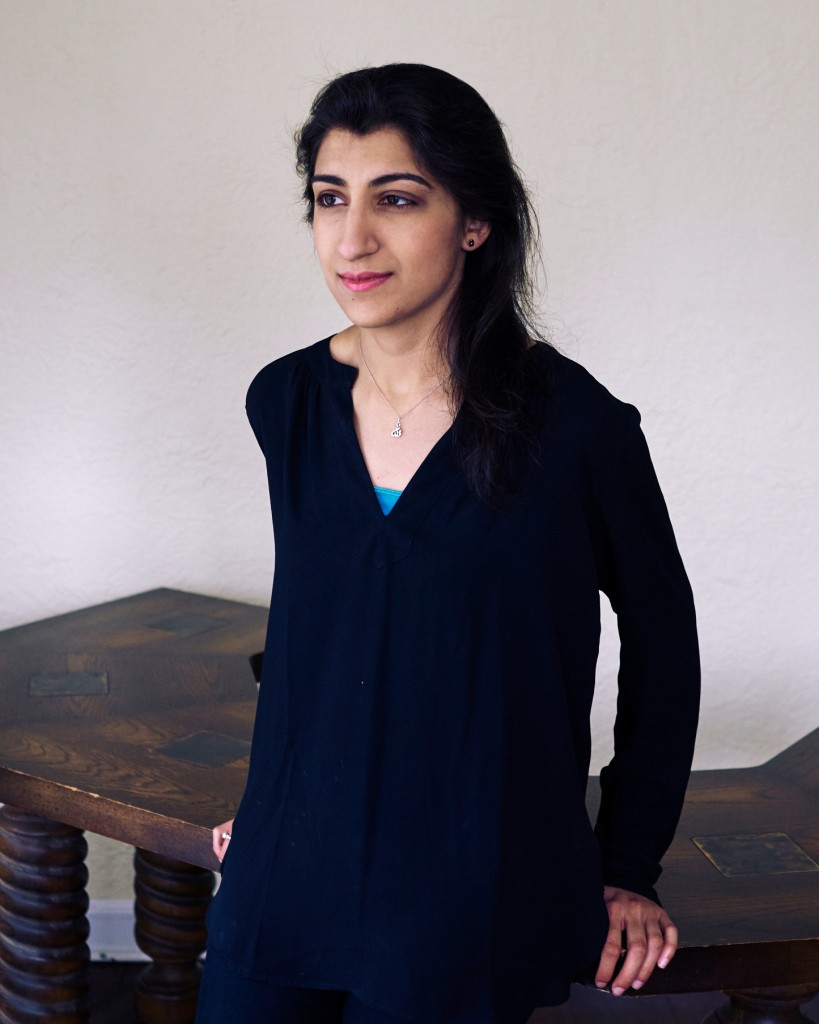 Photo: An Rong Xu for the Washington Post via Getty Images

Meanwhile, even as a Facebook lawyer could take over the antitrust division, one of Facebook’s biggest critics could get a major job of her own. The American Prospect and The Intercept can confirm that Columbia law professor Lina Khan, a prominent Big Tech critic who helped author a scathing House Antitrust Subcommittee report on the tech platforms, is the leading candidate to replace Rohit Chopra as a commissioner at the FTC. Chopra has been named Biden’s nominee to run the Consumer Financial Protection Bureau. The Capitol Forum, a subscription-based investigative news outlet, first reported the possibility of Khan replacing Chopra.

Though Khan hasn’t held a high-ranking position in the executive branch, she’s been at the top of the field for a while. Before Hillary Clinton lost the 2016 election, Khan was poised to head up Clinton’s transition team for the antitrust division. She also was a legal fellow at the FTC in Chopra’s office in 2018, and before that she was a summer associate when Chopra served at the CFPB. For the past year-plus, Khan has been a primary force behind the House Antitrust Subcommittee’s investigation into Big Tech.

The FTC shares jurisdiction over merger policy with the antitrust division of the Justice Department; each agency takes on mergers in different sectors. The FTC also has a substantial consumer protection portfolio and can write rules under Section 5 of the Federal Trade Commission Act that would prohibit certain anti-competitive practices, like worker noncompete agreements that ban employees from taking a job with a competing firm in the same industry.

Putting Khan in this role would maintain the anti-monopoly beachhead that reformers achieved at the commission with Chopra’s ascendancy as a commissioner in 2018. Despite being in one of two Democratic slots on a majority-Republican commission, Chopra was able to use the position to articulate a different strategy at the agency and even win substantive victories, pulling forward what has for decades been a moribund enforcer of antitrust and consumer protection laws. Keeping that energy up with Khan, a visionary legal mind in the field, would cement that mindset in place. Even if Khan somehow doesn’t get the job, the other potential names, including Khan’s Columbia colleague Tim Wu (who coined the term “net neutrality”) and the Open Markets Institute’s Sally Hubbard, would carry forward the banner of strict antitrust enforcement.

There are not one but two open seats for Democrats on the FTC, however. The fear from some reformers is that the Biden administration would offset the “antitrust seat” at the FTC with a pro-business counterpart. In an effort to preempt that, some Democrats are stressing the need for a “consumer protection seat” to pair with the antitrust seat to best tackle the FTC’s dual mandate.

There are several names out there, should Biden go that route. Alvaro Bedoya worked for former Sen. Al Franken on privacy issues; he now directs the Center on Privacy & Technology at Georgetown University. Privacy is a key issue at the FTC. Nicol Turner Lee, who covers a similar set of issues for the Brookings Institution, including algorithmic bias and racial equity, has also been mentioned.

On the flip side, a couple of the names that have been thrown out for the remaining FTC slot are more aligned with big business. For example, Travis LeBlanc, a former FCC enforcement bureau chief who’s now a corporate defense attorney with the firm Cooley LLP, could be in the running, though he also may be tapped for an FCC position.

The working assumption is that Rebecca Kelly Slaughter, the former aide to Senate Majority Leader Chuck Schumer and current FTC commissioner who was made the acting chair by the Biden administration, would continue in the chair’s role. The only reason that would change is if Terrell McSweeny, a top Biden adviser and former FTC commissioner, would want the chair. However, the rumored White House “antitrust czar” position is said to have been designed to give McSweeny a landing spot in the administration, should she decide to take it. Slaughter has already begun filling out senior staff at the agency; none of those positions require Senate confirmation.