In the usual style of overheated rhetoric around U.S. Middle East policymaking, the news that President Joe Biden’s administration is considering appointing Robert Malley as its envoy to Iran triggered a fierce reaction. Supporters of the Trump administration’s “maximum pressure” policy toward the Islamic Republic swiftly began lodging attacks based more on character assassination than substantive argument.

As a top national security official in the Obama administration, Malley helped negotiate the 2015 nuclear agreement between the United States and Iran, which President Donald Trump withdrew from in 2018. The ongoing fight over the deal and whether the U.S. can or should rejoin it largely informs the battle over Malley, who currently leads the International Crisis Group, an organization dedicated to ending violent conflicts. But the fight over Malley also ties into a broader debate over how the U.S. should engage in the Middle East: either through diplomacy with rivals or continuing thus far failed attempts to bludgeon them into submission.

The attacks against Malley’s appointment have been personal, with Sen. Tom Cotton, R-Ark., and others outright accusing the International Crisis Group head of “radical” sympathies with the Iranian government and enmity with Israel. In a recent New York Times column, Bret Stephens claimed, “Malley is widely seen as one of Tehran’s premier apologists in Washington.”

“Malley is the direct victim of the attacks, but Biden is the target.”

The ad hominem nature of the attacks against Malley has irked many Washington analysts, who see it as the start of a broader campaign to intimidate the incoming Biden administration over its Iran policy.

“This is standard operating procedure for the pro-Likud right wing,” said Joe Cirincione, a fellow at the Quincy Institute for Responsible Statecraft and previous head of the Ploughshares Fund, a nuclear nonproliferation organization, referring to the right-wing Israeli political party whose bent animates many Washington hawks. “This is how they operate. They traffic in bullying and lies as the main elements of their policy operation. They’d like to defeat Rob Malley and nail it as another scalp on the wall, but second, they would like to impose a cost on Biden and show that if he wants to move forward on his Iran policy, it will be difficult. Malley is the direct victim of the attacks, but Biden is the target.”

Many of the attacks against Malley fall apart upon scrutiny — if they are even based on things he has said or done. Cotton, for example, provided no justification at all for his statement that Malley shows “animus towards Israel.” Other attacks seem to be based on selective editing and innuendo. (Neither Malley nor the Biden administration responded to requests for comment.)

Take Stephens’s allegation against Malley that “in November 2019 he went so far as to suggest that massive public protests in Iran justified Tehran’s paranoia about an Israeli-Saudi-U.S. plot.” Stephens linked to a short video posted by a Twitter user who had clipped a longer French-language media segment in which Malley participated, suggesting that he had defended the Iranian government crackdown on protesters that year. But a former European Union security official, who posted the full 20-minute panel, refuted this allegation by describing the context of the comments. What’s more, the notion that Malley pushed this line was contradicted by the International Crisis Group’s own statements on the crackdown at the time.

The fact that Malley has been a consistent critic of human rights abuses by U.S. rivals like the Syrian regime has done little to dissuade accusations that he secretly holds malign sympathies, including by individuals for whom there is actual evidence of expressed views indicating disturbing double standards. It is not lost on Malley’s supporters that the man he would replace as Iran envoy, Elliott Abrams, won the support of these same critics despite an infamous public record that includes involvement in covering up a massacre in El Salvador, a confessed criminal record for his deceit in the Iran-Contra affair, and a record of suppressing democracy and disregarding human rights when it suited his geopolitical interests. 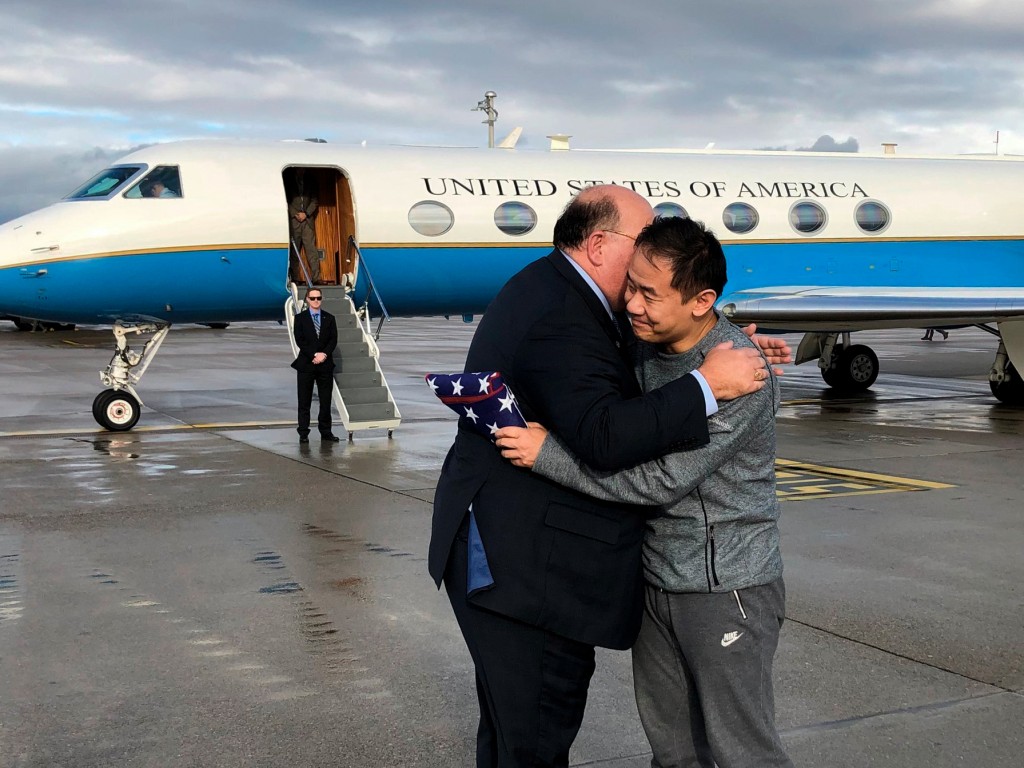 One of the more stinging criticisms of Malley came from Xiyue Wang, an American academic arrested and effectively taken hostage by the Iranian government for three years while doing doctoral research in the country during the final months of the Obama administration. “During my imprisonment Mr. Malley was a senior White House official. He played no positive role in facilitating my release,” Wang tweeted. “If he is appointed, it’d suggest releasing US hostages from Iran won’t be a priority.” Wang also said, “Malley has long opposed pressure against Iran & its regional proxies and apathy about Iran’s human rights abuse.”

Wang was ultimately released during the Trump administration, in large part due to the efforts of former United Nations Ambassador and former New Mexico Gov. Bill Richardson, a frequent interlocutor for U.S. prisoners and hostages held abroad. His organization, the Richardson Center for Global Engagement, played an integral role in engineering Wang’s release, helping tie it to the freeing of Masoud Soleimani, an Iranian scientist detained in the United States in 2018.

Those on Richardson’s team who helped negotiate for Wang’s release noted that even while out of government, Malley was sensitive to the urgency of freeing U.S. prisoners from Iranian custody.

“I did reach out immediately to Malley, who was eager to help us. To say that he didn’t care about Wang’s detention or saw it as an inconvenience is wrong and unjust.”

“Gov. Richardson’s involvement in negotiating Wang’s detention began in March of 2018 at the request of Wang’s family, well into Trump’s presidency,” Mickey Bergman, vice president of the Richardson Center for Global Engagement, told The Intercept. “We were not involved in the case during the four months Wang was detained in Iran that overlapped with the Obama administration. But it is common that cases like these take between one to two years at least to resolve. We knew we had to get Gov. Richardson in front of the Iranians in order to start the conversation.”

Malley had negotiated with Iranian officials during his time in the Obama administration, so Bergman reached out in order to make the connections needed to help facilitate Wang’s release. Bergman said that Malley was particularly helpful in the effort to speak to Iranian Foreign Minister Javad Zarif.

“Gov. Richardson had a previous relationship with Javad Zarif, but getting in front of him is not an easy thing to do. I did reach out immediately to Malley, who was eager to help us,” Bergman said. “To say that he didn’t care about Wang’s detention or saw it as an inconvenience is wrong and unjust.”

Wang, in an emailed statement to The Intercept, said that he had not previously heard of Malley’s role in winning his freedom, but stuck by his criticisms of the Obama administration. “I appreciate hearing that Mr. Malley made efforts to win my release after he left government, as Governor Richardson’s staff described,” Wang said. “I regret, however, that I was not a priority for the Obama administration during the five months I was detained in Iran from Aug 2016-January 2017, when more political will on the part of the Obama administration was required to resolve the problem.”

Another former American prisoner detained abroad praised Malley’s role in getting him released. Mohamed Soltan, an American who was held prisoner in Egypt for nearly two years beginning in 2013, took to Twitter on Wednesday to say that Malley, then part of President Barack Obama’s National Security Council, pressed for his release despite a policy toward Egypt that overlooked human rights abuses by the nominal ally. “He & his NSC team advocated heavily for my release, despite our Egypt policy at the time being horrendous,” said Soltan. “I was an American citizen, whom Rob had never heard of, nor stood to gain anything by fighting for. He & his team and so so many others did nevertheless.”

Much of the hostility to Malley’s appointment from hawks in the Beltway appears to stem from deeper historical and ideological disagreements. In 2008, while Malley was working as a Middle East adviser for then-candidate Obama’s presidential campaign, he was forced to resign after it was reported that he had previously engaged in talks with Hamas, a Palestinian political and militant group that the U.S. government has designated a foreign terrorist organization, as part of his work for the International Crisis Group. In a letter to the New York Times explaining his resignation from the campaign at the time, Malley stated that he had been open about these meetings with Hamas, which governs the Israeli-occupied Gaza Strip, and had even been asked to brief American and Israeli officials about them.

Then, as now, neoconservatives and other hawks kicked up a media storm. Malley resigned, saying in the letter that his role was “becoming a distraction to me and to Senator Obama’s campaign.” Due to that controversy, Malley did not end up joining the Obama administration until the president’s second term, where he wound up playing a key role in facilitating U.S. diplomacy with Iran.

Ultimately, the question of whether Malley makes it through the smear campaign and is appointed by Biden will say a lot about how the U.S. makes foreign policy in the Middle East in the next four years and perhaps well beyond.

A recent piece about the controversy by journalist Peter Beinart noted another reason that Malley seems to rub some people the wrong way: Throughout his career, Malley has been a rare figure inside the Beltway who has endeavored to see things from the perspective of smaller foreign powers that have often been at odds with the U.S., a tendency evidenced as early as 1996 in an empathetic book, “The Call from Algeria,” on Third World anti-colonialism.

It remains to be seen how the Biden administration responds to this pressure, although a diverse chorus of voices has been raised in support of Malley’s nomination to the Iran envoy role.

As Beinart put it, whether Malley’s appointment goes through will lay down a marker and serve as “a test of whether someone who sees beyond the smug and blinkered narrative that dominates Beltway discourse—and tries to elevate the voices of people who Washington policymakers often ignore—can win an important job in even a Democratic administration. Ambitious young wonks will take note and adjust their behavior accordingly.”

The post The Smear Campaign Against Robert Malley — and Biden’s Iran Policy appeared first on The Intercept.