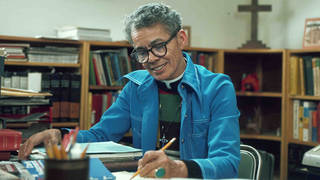 We spend the hour looking at the life of one of the most pivotal figures in the history of struggle for gender equality and racial justice, Pauli Murray, whose story is told in the new documentary “My Name Is Pauli Murray,” premiering at the Sundance Film Festival. Murray was a trailblazing Black, nonbinary, queer, feminist poet, lawyer, legal scholar and priest, who influenced the likes of Ruth Bader Ginsburg and Thurgood Marshall and is viewed as a hero to many in the trans rights movement. We feature excerpts from “My Name Is Pauli Murray,” which features new footage and audio recordings of Murray in their own words and interviews about Murray with Ginsburg and Bishop Michael Curry, the presiding bishop of the Episcopal Church, and speak with the filmmaking team behind the documentary, directors Betsy West and Julie Cohen. We are also joined by Dolores Chandler, a social worker and equity facilitator and trainer in Durham, North Carolina, who is featured in the film and is the former coordinator of the Pauli Murray Center for History and Social Justice. “The fact is most of us were not taught about Pauli Murray,” says Cohen. “This is a person who influenced so many different movements in the U.S.”