Imagine a parallel world where the US brought Covid under control in two months, while China still struggled with it, a year and hundreds of thousands of deaths later.

And in this alternative universe, a leading Chinese paper runs an article on the US’s “efforts to hide its missteps” in the Covid pandemic.

What kind of contempt would you have for that propaganda outlet, and for so-called journalists who would engage in such a transparent effort to distract from their own nation’s failures? 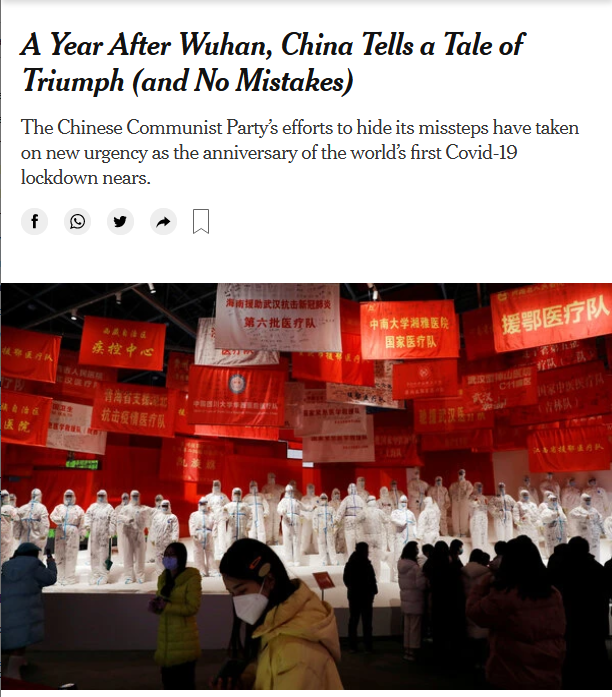 “China’s leaders have little interest in dwelling on the past or revisiting their mistakes,” say journalists from a much smaller country where 87 times as many people have now died from Covid (New York Times, 1/10/21).

Well, that’s how you should feel about our own world’s New York Times, which ran an article (1/10/21) with the subhead, “The Chinese Communist Party’s efforts to hide its missteps have taken on new urgency as the anniversary of the world’s first Covid-19 lockdown nears.” The article, by Amy Qin and Javier C. Hernández, went on to say:

China has spent much of the past year trying to spin the narrative of the pandemic as an undisputed victory led by the ruling Communist Party. The state-run news media has largely ignored the government’s missteps and portrayed China’s response as proof of the superiority of its authoritarian system, especially compared to that of the United States and other democracies, which are still struggling to contain raging outbreaks.

It’s a puzzling passage, suggesting as it does that it’s “spin” to portray China’s Covid response as an “undisputed victory…compared to that of the United States.” Let’s do that comparison:

Given these realities, it’s no wonder China thinks it has responded to the coronavirus far better than the US has—because, objectively, it has.

The genuinely remarkable thing is that the New York Times, the US’s most prestigious newspaper, has devoted considerable resources to investigating why China didn’t address the pandemic even more quickly and effectively than it did (FAIR.org, 10/14/20,  1/20/21). These exposés of China’s “missteps” generally boil down to Beijing not taking the virus seriously enough before January 23, 2020, when it put the entire city of Wuhan in quarantine—at which point the virus had been implicated in 17 deaths.

To put that in perspective, there were 16 deaths from Covid yesterday just in New Hampshire, the US’s 10th smallest state.

The Times‘ specifying “the United States and other democracies” as the group of countries China is comparing itself to is a bit of a red herring. While it’s true that many US allies weathered the pandemic as poorly as the US did, there are several wealthy countries with multi-party political systems that did far better—including New Zealand, South Korea, Australia, Japan, Iceland, Norway and Finland. So the disparity is not so much between “authoritarian” states and “democracies,” as the Times suggests, as between countries that took the coronavirus seriously and those that didn’t. 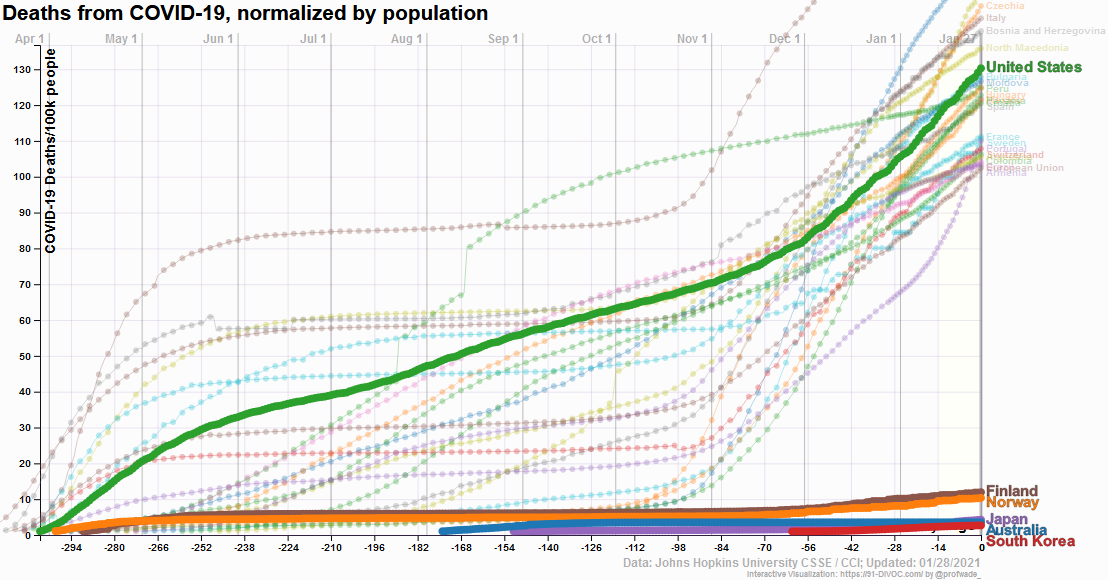 The advantages of mass death 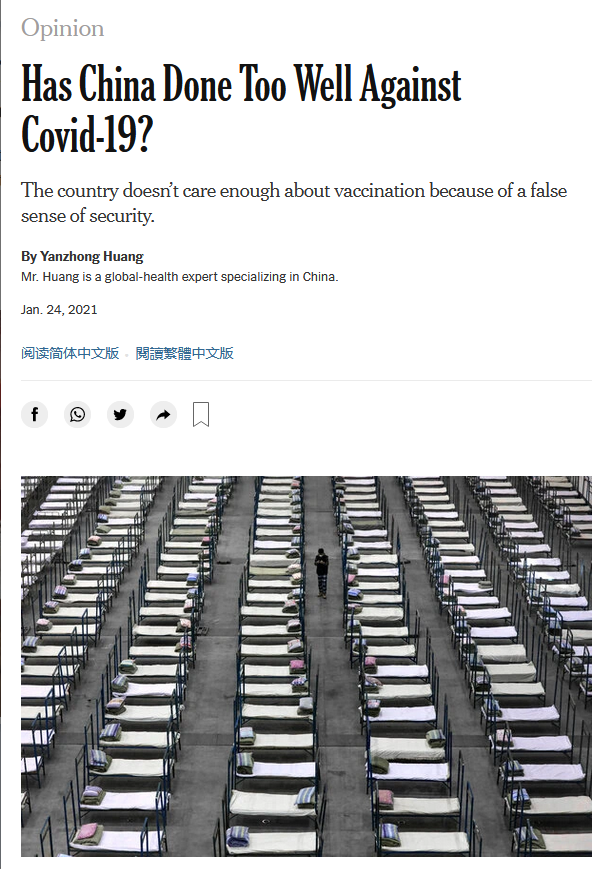 If maintaining that China’s Covid response wasn’t really all that great doesn’t seem plausible, maybe you could argue that it was too good? That was the actual argument of a New York Times op-ed (1/24/20), headlined “Has China Done Too Well Against Covid-19?”

The main evidence presented by author Yanzhong Huang that China was suffering from not enough people dying is that it is “over-exporting vaccines made in China in a bid to expand its influence internationally.” By this, Huang means that China is sending many of the doses it manufactures to places like Brazil, where a thousand people are killed by Covid every day, rather than keeping most of them at home, where Covid kills one or two people each day. If only the Chinese people had experienced mass death like we did to teach them the value of hoarding.

Huang, a senior fellow at the Council on Foreign Relations, also claims that in China, “the population feels much safer than it should.” He cites as evidence a cross-national Ipsos survey (12/29/20) that found that just 80% of respondents in China would take a Covid vaccine if one were available. Huang doesn’t mention that that was the highest positive response rate among the 15 countries polled—compared to 69% in the US and only 40% in France, countries that have certainly not suffered from doing too well against Covid.

But, Huang points out, of the 20% disinclined to get vaccinated, 32% say it’s because they are not at enough risk from Covid. Of course, a third of one-fifth is less than 7% of the population, which hardly seems like enough to make one regret not having more Covid deaths. It’s similar to the fraction of people in the US who say they wouldn’t take a vaccine because they aren’t at risk enough, despite the advantage Americans have had of a 400,000+ death toll. But Chinese people who think that their risk of catching Covid is low are on solid ground, statistically: In the United States, your chances of coming down with Covid yesterday were about 1 in 2,000, whereas in China, they were 1 in 10,000,000.

The value of a scary danger 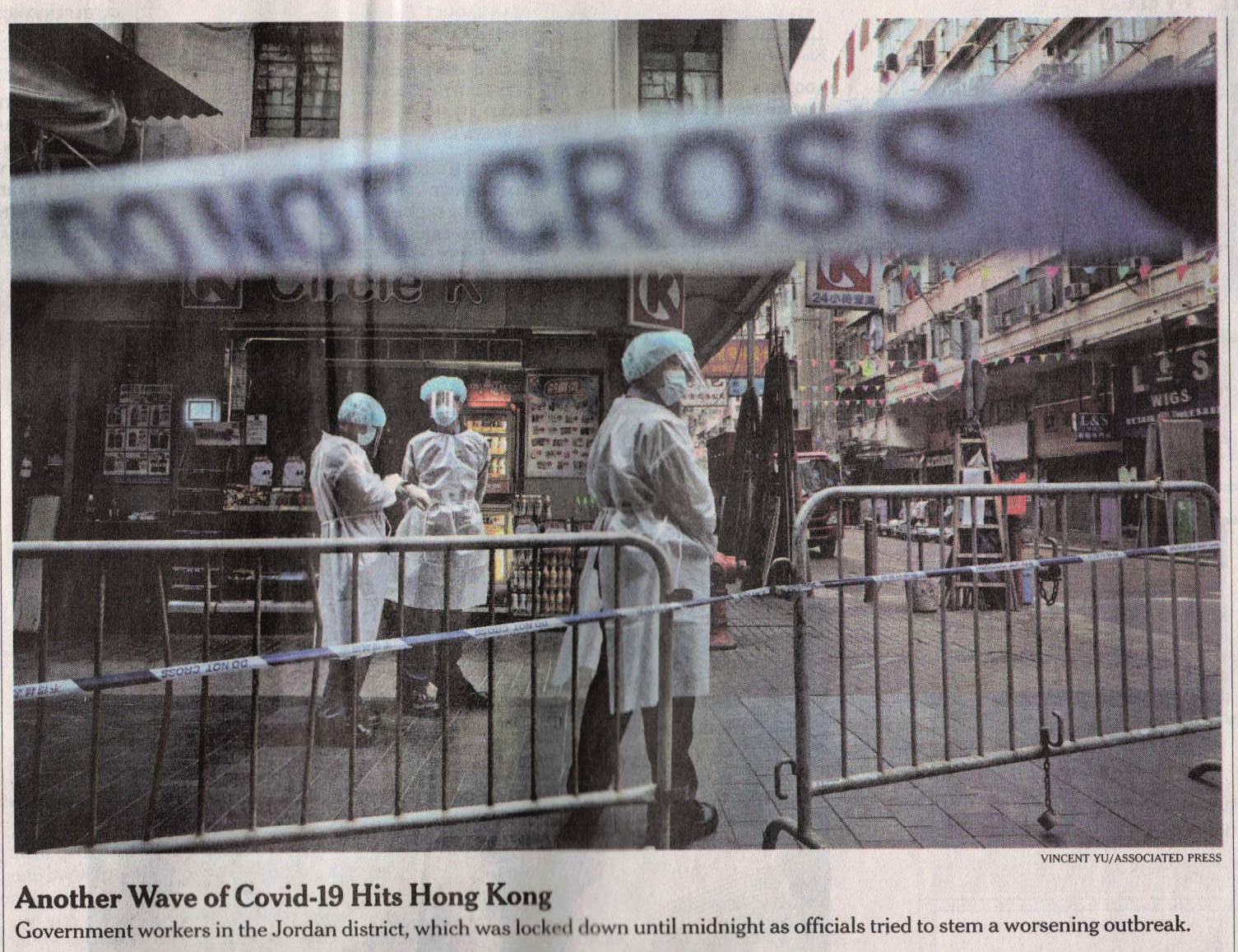 The New York Times (1/25/21) treated it as front-page news when Hong Kong reached the same number of daily Covid cases as the Brighton Beach zip code in Brooklyn.

Too good or not good enough, China’s coronavirus response is an obsession of the New York Times. On January 25, the front page of the Times‘ print edition was dominated by an ominous above-the-fold photo of people in protective gear behind police tape reading “DO NOT CROSS,” with a caption headline “Another Wave of Covid-19 Hits Hong Kong.” This “wave” consisted of residents of Hong Kong (population 7.5 million) coming down with Covid at the rate of 75 a day—whereas in New York City (population 8.4 million), people are catching it at the rate of about 4,000 a day. But the context that Hong Kong’s outbreak was roughly 1/50th as bad as what’s considered business as usual in the Times‘ hometown was entirely missing from the scary photo and caption on the paper’s front page.

Why make a relatively tiny outbreak of the coronavirus on the other side of the world front-page news at the New York Times? Like Donald Trump, the paper is certainly aware of the propaganda value of pointing to China as a scary danger—as illustrated by an ostensibly unrelated story adjacent on the same front page, with the print headline “US Counters Space Threat From China.” In that article, a gaggle of retired generals, now at weapons industry–funded think tanks, used Beijing to make the case that maybe Space Force wasn’t such a wacky idea after all.

ACTION ALERT: You can send a message to the New York Times at letters@nytimes.com (Twitter:@NYTimes). Please remember that respectful communication is the most effective. Feel free to leave a copy of your communication in the comments thread.