With the Biden administration focused on passing a massive Covid relief package as its first major legislative action, the Sunday morning political talk shows tackled the issue with remarkable uniformity, fixated on exactly the wrong questions.

“Are the Democrats about to give up on bipartisanship too soon?” asked Chuck Todd, host of NBC‘s Meet the Press (1/31/21).

Unity was the focus of Joe Biden’s campaign, the reason he said voters should turn to him. He predicted a GOP epiphany after the election. But the lack of even gaining one Republican vote so far for Covid relief, what does that mean going forward in terms of unifying the country?

Over at CBS (1/31/21), Face the Nation host Margaret Brennan started off with a both-sides approach to encompass all the politics of the day:

With new accusations and threats on top of increasing fears over the safety and security of members of Congress, bipartisanship is in short supply on Capitol Hill. Will anyone be willing to compromise? 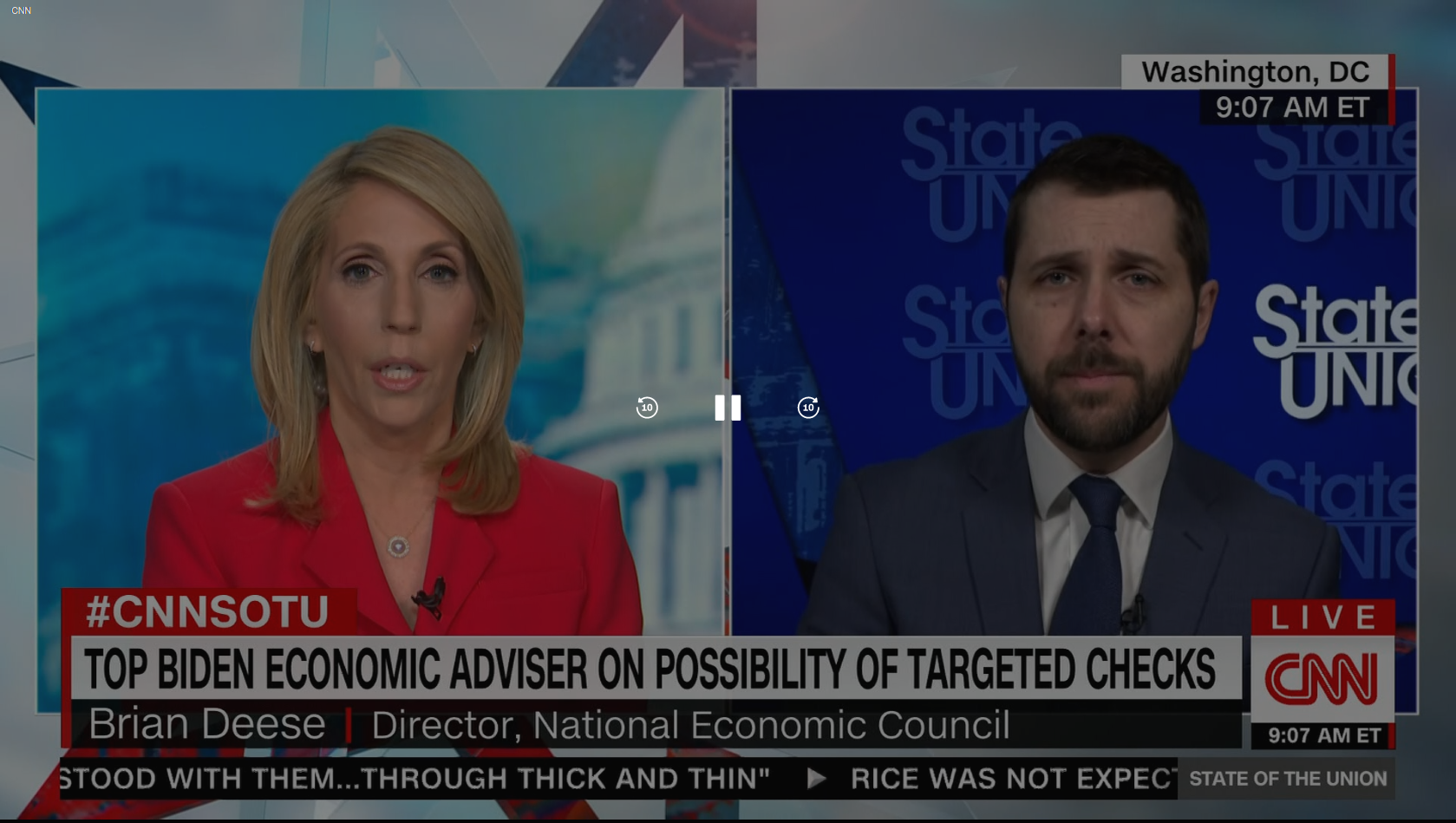 CNN‘s Dana Bash with Biden adviser Brian Deese (State of the Union, 1/31/21): “What I’m trying to figure out is where the points of compromise are.”

CNN‘s Dana Bash skipped both-sidesism and reserved all the scrutiny for the Democrats. “As the new administration pushes for more relief, will they get the bipartisan support the president promised?” asked Bash on State of the Union (1/31/21):

The question is whether President Joe Biden will be able to deliver on the compromise he promised the nation in his inaugural address just 11 days ago or whether Democrats will plow ahead with the plan all by themselves.

Biden did not, in fact, promise compromise in his inaugural address; he didn’t even use the word in the text of his speech. As we pointed out recently (FAIR.org, 1/22/21):

When Biden used the word “unity” in his inaugural address, that he followed it immediately by invoking Abraham Lincoln’s signing of the Emancipation Proclamation was certainly no accident; it was intended to make quite clear that “unity” does not mean “adopt the priorities of the minority opposition (which, by the way, just sought to overthrow the democratic election).” Rather, it means that we “treat each other with dignity and respect” and, crucially, that “disagreement must not lead to disunion.”

But it appears corporate media have largely adopted the Republican spin on what Biden meant, such that which side is acting in bad faith on Covid relief becomes an open question. 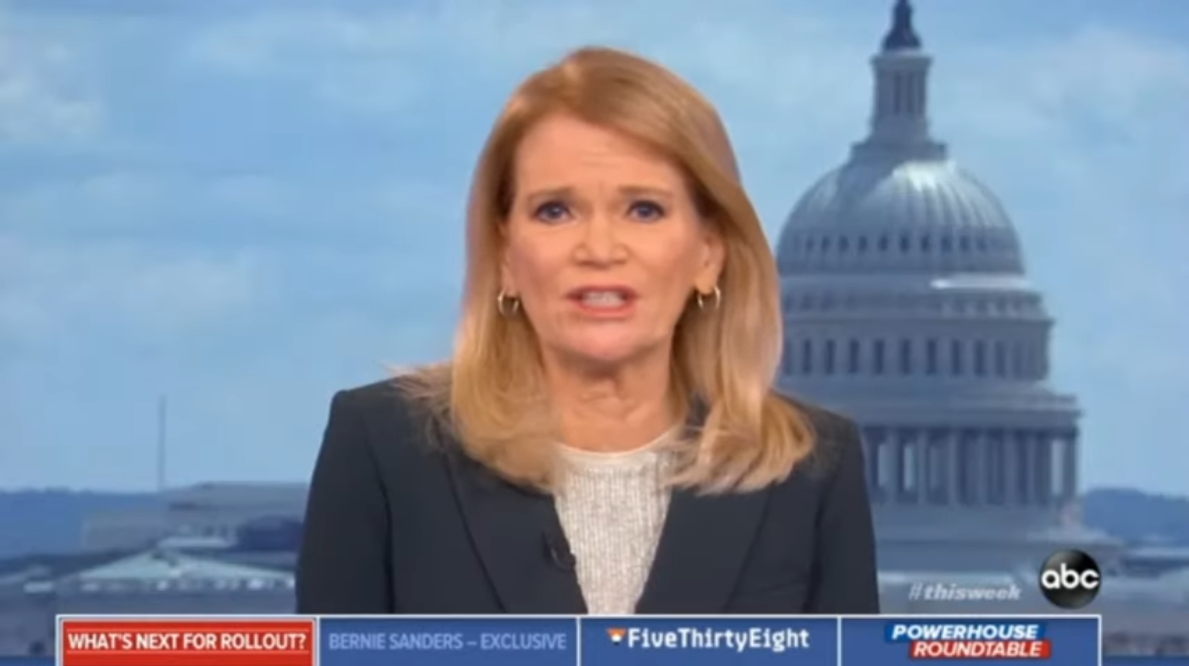 ABC‘s Martha Raddatz (This Week, 1/31/21): “Is it a mistake for Democrats to consider abandoning bipartisanship negotiations so soon?”

Thus ABC‘s Raddatz asked correspondent Cecilia Vega, “What have you seen Joe Biden do to reach out to some of those Trump voters, reasonable conservatives, to try to bring them into the fold?”

Vega replied, “Well, I think, Martha, you’re hitting on the complaint that we’re hearing from so many Republicans right now, that they haven’t seen a lot.”

Is the president willing to compromise then and, perhaps, strip out something like this $15 minimum wage demand that many Republicans object to? Could he make that a separate vote?

Obviously, given the Democrats’ bare majority in the Senate, the parts of the bill that have less support among congressmembers (regardless of their popularity with the public) are more likely to pass when bundled with items that politicians think are important than they would if they were offered on their own. But jettisoning the minimum wage provision is something Brennan apparently cared a lot about, since after Richmond argued that the many essential workers who labor for minimum wage shouldn’t have to take on two jobs to survive, she pressed him: “But you could make that a separate vote.”

the biggest complaint about the president’s $1.9 trillion Covid rescue package is that it’s just too big…. You would give $1,400 checks to someone who’s making $75,000 a year and has kept his job. Hundreds of billions of dollars already approved by Congress haven’t been spent yet, and there’s money for things that have nothing to do with Covid, like $20 billion for mass transit and raising the minimum wage.

CNN‘s Bash similarly pushed her guest, Biden economic adviser Brian Deese: “Are you wedded to the number, the price tag, $1.9 trillion? Are you willing to come down from that?” 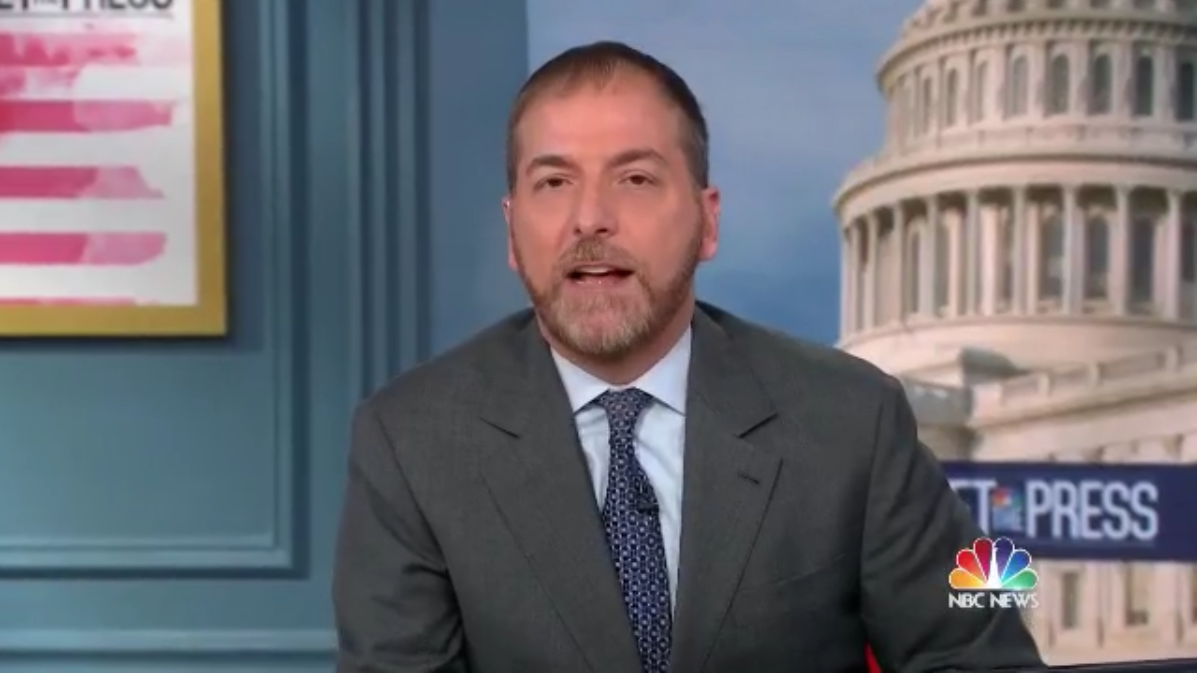 Chuck Todd (Meet the Press, 1/31/21): “With Congressional Democrats preparing the budget reconciliation process…why shouldn’t Republicans who did want to work with you guys look at that as a way of saying, ‘Oh, they’re not serious about negotiating on a bipartisan basis’?”

Deese, who also appeared on NBC, faced the same pressure from Chuck Todd:

You know there is—parts of your $2 trillion plan that does have bipartisan support, maybe they’re basically the money for vaccinations, the direct checks with some means testing. There’s probably a trillion dollar deal you could do with 60 votes.

But just as he glided over the actual contents of the Republican counter-offer, the price tag of the Biden plan seemed more important to Todd than the content. “Do you know when you add it all up we’re looking at five and a half trillion dollars in one calendar year?” he needled Deese. “From March to March, assuming you get your $2 trillion. How much more do you think the government’s going to have to pump in, after you pass your Covid relief bill?”

Todd’s roundtable guests scarcely challenged his framing, as he asked them repeatedly whether Democrats would “look back and regret not pursuing a bipartisan strategy.” Republican strategist Al Cardenas argued:

Joe Biden thinks and the administration thinks that a seven million vote majority gave them a mandate. And Republicans are saying, “Well, I thought Donald Trump was an outlier, because we actually did better than you nationally.” So I think both parties look at it differently. I think Joe Biden is committed to getting results. I think a lot of Republicans are holding back. And so we’ll see where it goes. But bipartisanship’s not going to be easy. These ten senators are actually heroes.

Cardenas didn’t explain further. But it’s remarkable that this is what constitutes heroism on the Sunday shows: proposing that the government cut payments to people making over $40,000 a year, slash proposed funding for schools and eliminate plans for a $15 minimum wage and rent relief—among other “compromises.” 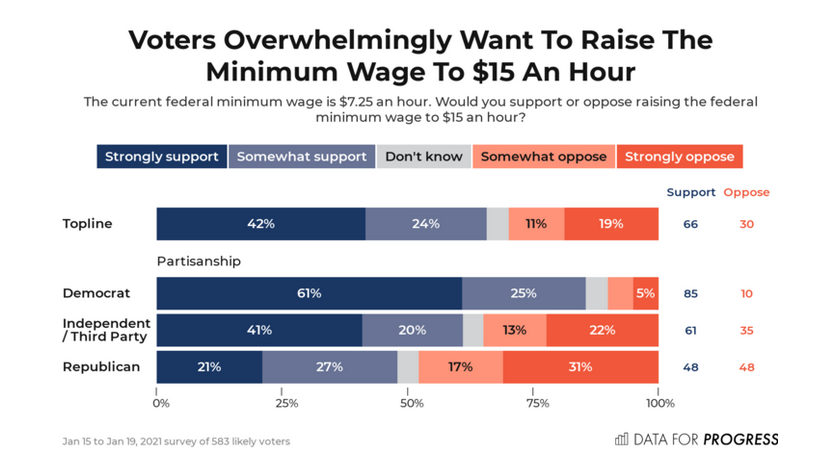 What would “unity” be in the context of a relief bill, really? Presumably, the “reasonable conservatives” ABC suggests are being ignored might be the 48% of Republican voters who favor the $15 minimum wage that CBS‘s Brennan wants to see scrapped, and the fully 70% of Republican voters who support $2,000 checks for “most Americans.” According to a recent survey, 59% of Republican voters (and 71% of all voters) support a $2 trillion stimulus package. That’s remarkable “unity”—when you look for it in the public, rather than in the twisted world of Washington.

Note that the bounds of the debate exclude the 56 House Democrats who are pushing for recurring direct payments in the relief bill—which happens to be supported by 65% of the public—and the idea of offering full $2,000 direct payments as promised, instead of $1,400 payments to supplement the prior relief bill’s $600 checks (Jacobin, 1/27/21).

As FAIR has shown in the past (e.g., Extra!, 9–10/01), the Sunday shows have historically offered a very narrow range of debate that consistently fails to challenge corporate power or give voice to public advocates or activists. Last spring, as the pandemic quickly escalated and Washington actors were making important decisions about how to address both the economic and public health fallout, FAIR (5/22/20) found that the Sunday shows almost entirely sidelined public interest voices who might have advocated for more robust relief measures—while making room for voices like the CEO of Bank of America, two Federal Reserve Bank presidents and billionaire business executives Bill Gates, Barry Diller and Mark Cuban.

Likewise, in focusing on the latest round of economic relief, the Sunday shows brought on no public advocates to offer their opinions.

The Democratic Party rode to victory in Georgia on its forceful and clear promise to give people $2,000 checks if they were given control of the Senate. But to hear corporate media tell it, the more important promise—and the only one they will hold him accountable for—is one Biden never even made: to compromise with the GOP for the sake of compromising.