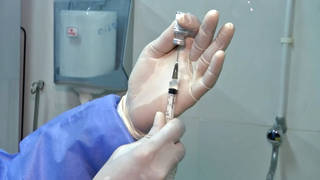 Russia has been one of the countries hardest hit by the pandemic, recording about 73,000 deaths and over 3.8 million infections over the past year. Meanwhile, there is widespread skepticism over the domestically developed Sputnik V vaccine, with many Russians reluctant to get the shot. Now a peer-reviewed study published in the respected Lancet medical journal has confirmed the vaccine’s 91.6% efficacy, as developers of the shot have long maintained. “That’s good news for the developers of the vaccine in Russia. That’s good news for Russia writ large, which certainly has plenty of geopolitical ambitions surrounding the vaccine,” says Joshua Yaffa, correspondent for The New Yorker in Moscow. “And it’s frankly good news for the world.”