A newspaper clipping with the headline “Farmers’ age-old demand fulfilled: Rakesh Tikait” has been making the rounds on social media. Twitter user @brijeshchaodhry shared the clipping and wrote, “Don’t know when these naive people will understand what’s really going on. When the government enacted the new farm laws, Rakesh Tikait welcomed the move, saying that the government has fulfilled the farmers’ age-old demands. After a few days, he was given a suitcase full of money and changed his tone.” The post was retweeted by more than 300 users at the time of writing. (Archive link)

Twitter user Akash RSS also shared the image. He has been caught spreading misinformation on social media many times in the past, which you can read about here. (Archive link)

Alt News performed a keyword search which led us to a report by Live Hindustan dated June 4, 2020. The title of this report and the headline in the viral image are identical. 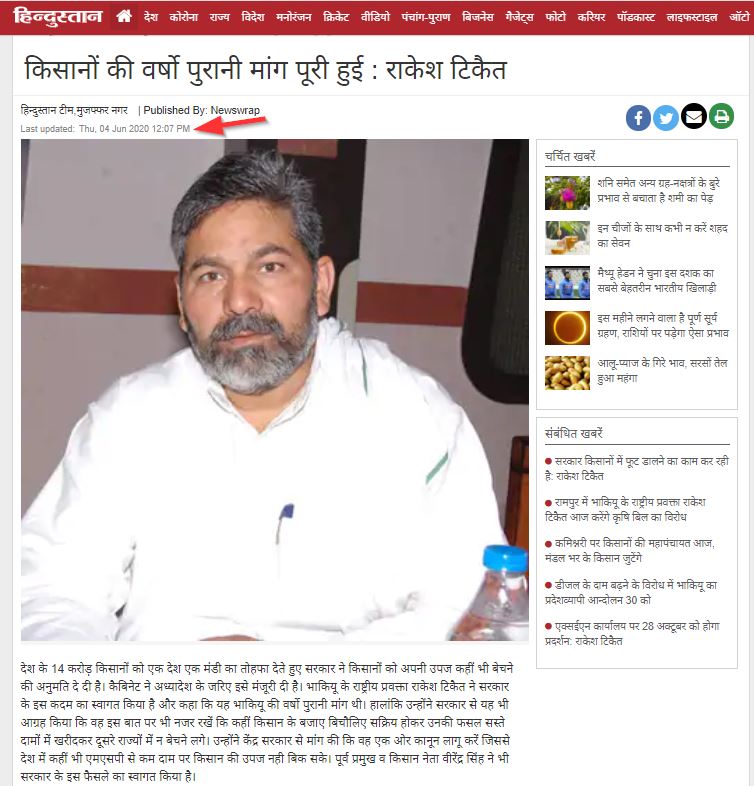 The article says, “The government has allowed farmers to sell their produce anywhere, giving the gift of ‘one country one market’ to 14 crore farmers in India. The cabinet has approved it through an ordinance. BKU national spokesperson Rakesh Tikait welcomed the government’s move, adding that this had been a BKU demand for many years.”

“He also urged the government to watch out for instances where middlemen, in place of farmers, were buying their crops at cheaper rates to sell them in other states. He demanded the central government implement another law so that the produce of the farmers could not be sold at a price lower than the MSP anywhere in the country.” In addition, Asianet News Hindi also published a report that included the viral Live Hindustan clipping.

Rakesh Tikait clarified about the Hindustan report in an interview with Aaj Tak on January 12, 2020. At the 20:30 mark, he says, “The support you mentioned is from Hindustan paper. I had said that I should also be able to thank the government. Digital India campaign is the Prime Minister’s pilot project, he should bring these services to us. It takes two years to be compensated for our sugarcane crop. Please pay us for our sugarcane. The crops falling under the MSP should also be added. Then, we will also thank the Prime Minister, we will also thank the government. If you read the whole thing [Hindustan report], it will make sense. Everyone has the same document in front of them, it is not that the government is not doing any work, and all the farmers are doing is fighting. Give us something to thank the government for as well. Please repeal a few specific clauses of the laws and we will thank you again.” Tikait had given similar statements in December 2020 during an Aaj Tak debate show.

The new farm bills were tabled in Parliament on June 5, 2020. They were introduced in the Lok Sabha on September 14, 2020. After being passed in the lower house, President Ram Nath Kovind gave his assent on September 27, 2020.

What was Rakesh Tikait’s opinion on the three bills before they were introduced in the cabinet?

We examined his social media handles to gauge this. Tikait had posted a newspaper clipping on June 3, 2020, on the increase in MSP rates. Here, he said that farmers were being cheated in the name of the increase in MSP. Amar Ujala published a similar story on June 2, 2020. According to this article, the Bharatiya Kisan Union (BKU) had demanded that the government enact a law to make MSP mandatory. The BKU also issued a blog post on this.

Apart from this, BKU Twitter handle shared a Newsclick article on June 5, 2020, where BKU leader Dharmendra Malik was quoted as saying, “In the wake of the coronavirus crisis, the government is fulfilling its hidden agenda. The decisions the government is taking for farmers at this time seem to be for the private sector’s benefit. The government is not worried about farmers. They are also taking such decisions because they know that farmers cannot agitate at this time.”

Therefore, Rakesh Tikait himself refuted the report by Live Hindustan and clarified the reservations he shared with regard to the farm bills during two separate Aaj Tak debates.