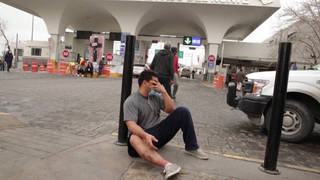 Hundreds have been deported in the last week, even as President Biden signed several executive orders Tuesday to undo the Trump administration’s hard-line anti-immigration policies. The orders include a push to reunify families torn apart under Trump’s “zero tolerance” policy and a review of the Trump policy known as “Remain in Mexico” that requires non-Mexican asylum seekers to wait in Mexico as their immigration cases wind through court, leaving tens of thousands waiting in dangerous conditions along the border. Reporter Aura Bogado says that despite the Biden administration’s new “tone,” continued deportations of vulnerable people demonstrate “a continuation of the same practices that happened under President Trump and previously under Obama.” Erika Pinheiro, an immigration attorney and the policy and litigation director of Al Otro Lado, a binational nonprofit helping immigrants on both sides of the U.S.-Mexico border, says many migrants left waiting in Mexico are losing patience with assurances that the new administration will have a plan for them. “If we don’t have an answer for these people, other groups will fill that information void, like cartels and like smugglers, and ultimately the lack of a plan is going to result in more migrant deaths,” says Pinheiro.