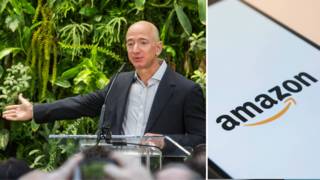 Amazon founder Jeff Bezos has announced he will step down as CEO and move into a new role as executive chairman later this year, giving up the reins after nearly three decades during which he grew Amazon from an online book retailer into a sprawling business empire and became one of the world’s richest people in the process. Andy Jassy, the head of the company’s cloud computing division, is set to take over the top job, but Bezos will continue to be the largest Amazon shareholder and remain on the board of directors. The news comes as calls continue to mount for lawmakers to break up Amazon and other tech giants. “There’s no reason to think anything is going to change at Amazon because Bezos has taken this new role,” says Robert Weissman, president of the consumer advocacy group Public Citizen. “Neither the economy nor our democracy can really function properly with fairness if Amazon is able to maintain its massive concentration of wealth and power.”