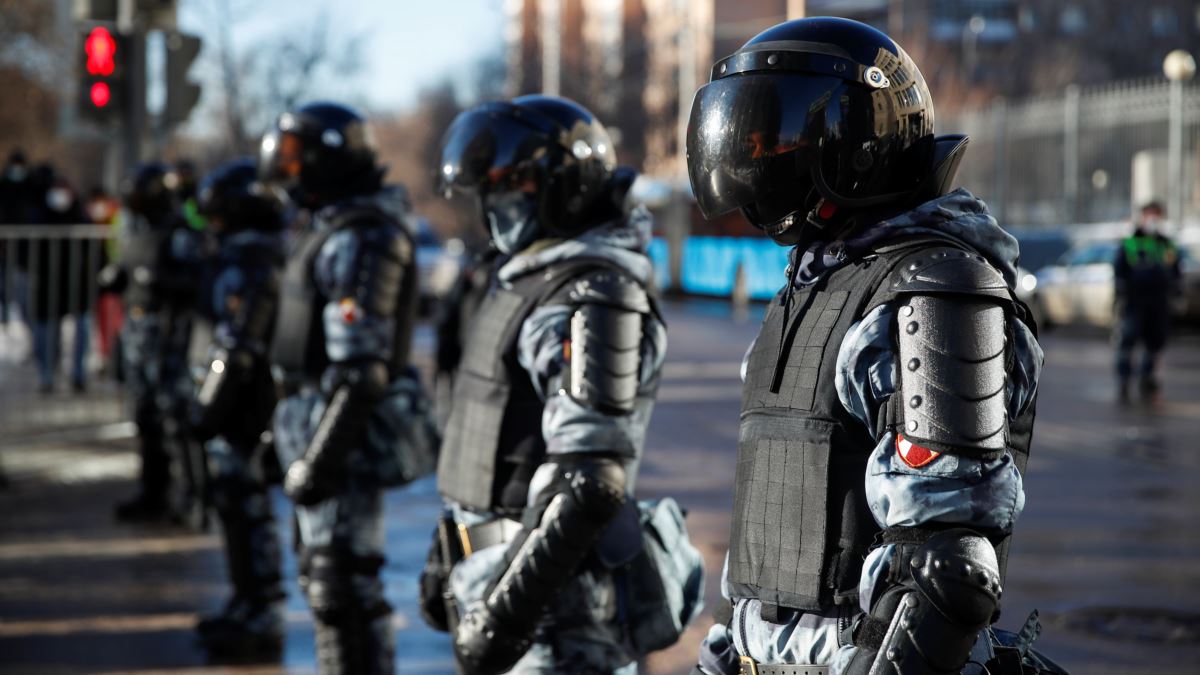 MOSCOW — A Moscow court’s decision to sentence Russian opposition politician Aleksei Navalny to 2 years and 8 months in prison has sparked a strong reaction from Western countries and immediate protests in Russia, while analysts say it is meant to crush growing dissent.

Judge Natalya Repnikova on February 2 ordered a suspended 3 1/2 year sentence Navalny received in 2014 to be changed to time in a penal colony, cutting it to 2 years and 8 months for time already served.

The decision outraged his supporters, hundreds of whom took to the streets to protest. Washington demanded Russia release Navalny and others detained during recent protests.

Navalny’s lawyer, Olga Mikhailova, said the ruling will be appealed.

The 44-year-old has become the nation’s most influential opposition figure after years of skillfully harnessing social media to channel growing discontent over a host of issues ranging from falling living standards to perceptions of corruption against President Vladimir Putin and his ruling elite.

That has made him a potential threat to the Kremlin, which appears to want to make an example of him, analysts said.

Putin opted for such a harsh sentence “to make Navalny — and others — realize that they face the prospect of spending the rest of their lives behind bars,” Tatiana Stanovaya, a founder of the think tank R. Politik, said in a tweet.

She warned that other groups, including liberal media, nongovernmental organizations, and opposition-minded activists, will face increased pressure as the Kremlin seeks to quell protests that have grown in number over the years.

The Kremlin has already been cracking down on the opposition and rights groups through new repressive laws passed by a compliant parliament.

Vladimir Ryzhkov, a Kremlin critic and former Duma member, warned that Navalny’s arrest could lead to a new wave of emigration among the nation’s most politically active citizens.

Navalny has been held since his high-stakes return on January 17 from Germany, where he had been recovering from a nerve-agent poisoning he claims Putin ordered.

The Russian Federal Penitentiary Service (FSIN) had accused Navalny of parole violations relating to a suspended sentence he had been serving in a 2014 embezzlement case he calls trumped up.

In a statement to the court earlier on February 2, Navalny repeatedly mocked Putin while stressing the aim of the hearing was to try to intimidate anyone who stood up to the Kremlin.

“The main thing in this whole trial isn’t what happens to me. Locking me up isn’t difficult,” he told the court.

“What matters most is why this is happening. This is happening to intimidate large numbers of people. They’re imprisoning one person to frighten millions,” Navalny said as he faced the court in a glass-enclosed holding cell.

LISTEN To Excerpts Of Navalny’s Speech In Court

The activist demonstrated his considerable national political influence when tens of thousands of people — despite threats of arrest — heeded his calls on January 23 and January 31 to protest against his detention.

The rallies were the largest anti-government protests in Russia in a decade with people assembling in more than 100 cities around the country. Police at times used violence as they detained some 10,000 participants.

Navanly’s jailing comes as the Kremlin prepares for key parliamentary elections in September. Putin controls the parliament through the ruling United Russia party, which rubber-stamps his legislation.

However, the party’s ratings are slumping as the economy and wages stagnate. Navalny’s Anti-Corruption Foundation is seeking to chip away at Kremlin control through a campaign to encourage voters to reject United Russia candidates at the ballot box.

“Putin needs Navalny in jail during Russia’s next round of elections. That is obvious. He fears Navalny,” Michael McFaul, the former U.S. ambassador to Russia and a Kremlin critic, said in a tweet.

After the verdict, Navalny’s team immediately called for further demonstrations, hoping to capitalize on the momentum of the past two weekends.

However, the government deployed a large force of riot police in Moscow and closed down many streets, including those around the court complex.

More than 1,300 people in 10 cities across the country, including more than 1,100 in Moscow, had been detained by the early hours of February 3, according to the independent monitoring group OVD-Info.

The February 2 decision sparked strong criticism in the West, with the United States, Britain, Canada, and the European Union issuing statements denouncing the decision.

The West’s relationship with Russia had already been tense following a host of malign activities that the EU, the United States, and other countries have pinned on the Kremlin, including election interference, state-sponsored hacks, and the use of chemical weapons.

The jailing of Navalny could trigger yet more sanctions against the Kremlin as the West, with new leadership in Washington, seeks to show greater resolve on human rights abuses in Russia.

U.S. Secretary of State Antony Blinken said Washington was “deeply concerned” by Navalny’s jailing and called on Russia to release the activist and “the hundreds of other Russian citizens wrongfully detained in recent weeks for exercising their rights.”

He said that Washington and its Western partners would react if Russia did not live up to its international obligations to respect freedom of assembly and expression.

“Even as we work with Russia to advance U.S. interests, we will coordinate closely with our allies and partners to hold Russia accountable for failing to uphold the rights of its citizens,” he said in a statement.

U.K. Foreign Secretary Dominic Raab agreed, saying the Moscow court’s decision “shows Russia is failing to meet the most basic commitments expected of any responsible member of the international community.”

EU foreign policy chief Josep Borrell, who is expected in Moscow from February 4-6 to meet with top Russian officials and members of civil society, called the jailing “arbitrary and unreasonable.”

Navalny’s detention and poisoning is expected to be high on his agenda.