Among the panoply of bizarre memes that far-right extremists flash at Trump rallies and share obsessively online, one of the more disturbing for its frightening historical reference is that of the “Hoppean Snake.” The image typically consists of a coiled serpent sporting the officer’s cap of notorious Chilean Gen. Augusto Pinochet. In the background fly childlike depictions of helicopters from which stick figures are jettisoned to their death, crying “Aaaahhh” in a barely legible scrawl. In one of its many variants, the snake-as-Pinochet proclaims with a sardonic smirk, “I’m evil for throwing people out of helicopters? False. Commies aren’t people.” It’s unclear why Pinochet is depicted as a snake, though it may be inspired by the recalcitrant snake on the Gadsden flag that warns “Don’t Tread on Me.”

Far from being a joking homage to Pinochet — putschist, tyrant, torturer, mass murderer, puppet of the CIA, and hater of all things socialist, who ruled Chile from 1973 to 1990 — the fetishized totem of the Hoppean Snake has dire significance for U.S. paramilitaries. When Boogaloo Bois, Proud Boys, Three Percenters, Oath Keepers, armed Trumpists, and the like wear T-shirts that offer “free helicopter rides,” they are referencing a program of extermination.

Following Pinochet’s 1973 coup d’état, which ended the short-lived and turbulent administration of Chile’s democratically elected president Salvador Allende, an avowed Marxist, thousands of Allende’s supporters were killed, tens of thousands of perceived enemies of the putschist regime were tortured, and thousands of others were disappeared, often after being flown in a military helicopter and toppled from the sky. Sometimes this free helicopter ride included splitting open the guts of kidnapped victims while they were still alive so that their bodies wouldn’t float when dumped in the sea. 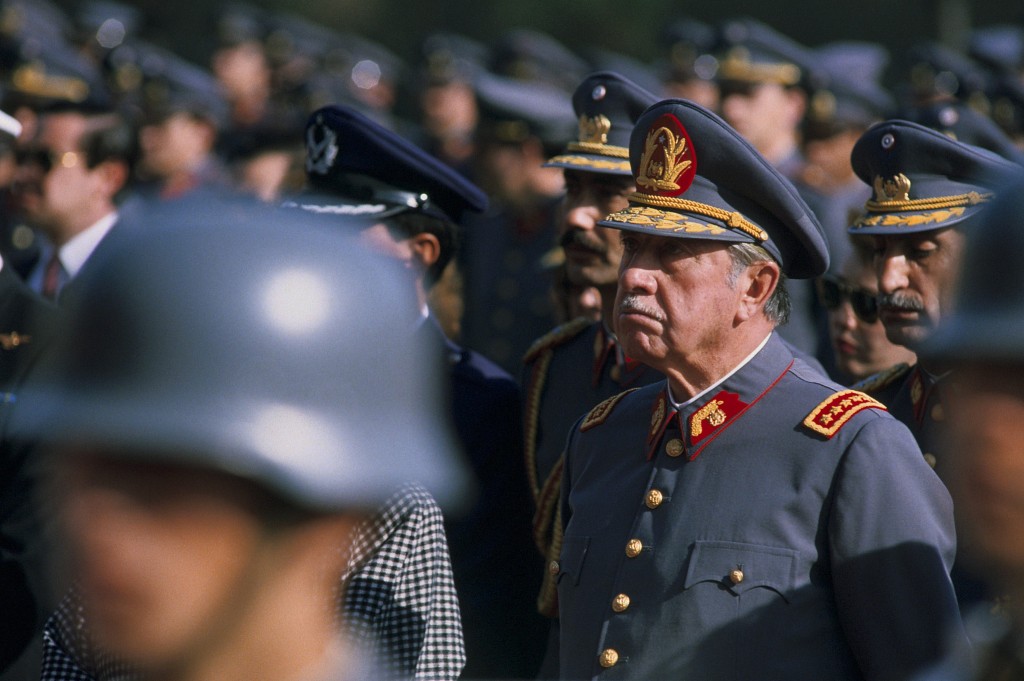 U.S.-backed dictator Augusto Pinochet, right, photographed in Santiago, Chile, in 1986, wearing the military cap that is now being seen in an alt-right meme called the “Hoppean Snake.”

“The Hoppean Snake is utilizing Cold War-era anti-communist imagery of a once-hidden history of right-wing brutality and terror that utilized U.S. military hardware,” said Portland-based investigative photojournalist Jeff Schwilk, who has documented the iconography of the alt-right since 2016. “Pinochet specifically hearkens to the heyday of U.S.-backed death squads in the 1960s, ’70s, and ’80s, from the Phoenix Program in Vietnam to Suharto in Indonesia to the Contras in Nicaragua. It is a direct threat of the intention of deadly mass violence and future death squads targeting the left in the United States and anyone else deemed an enemy. It reveals the true nature of this ideology.”

On January 27, the Department of Homeland Security issued a terrorism advisory bulletin warning of the ongoing threat from far-right domestic extremists. The January 6 assault on the Capitol was said to be mere prologue, with “DVEs” — domestic violent extremists — now “emboldened … to target elected officials and government facilities.” The Homeland Security bulletin further warned of threats “against critical infrastructure, including the electric, telecommunications and healthcare sectors.”

In the wake of Allende’s election in 1970, right-wing elements in Chile formed a paramilitary group called Patria y Libertad, or Fatherland and Liberty. Patria y Libertad was not too different in spirit from the militias now common on the right in the U.S., though it had foreign funding and training, courtesy of the CIA. The group engaged in arsons, assassinations, and disruptions of infrastructure — exactly what the Department of Homeland Security warns we should expect from violent domestic extremists today.

I first came across the image of the Hoppean Snake while editing Schwilk’s 2020 book of essays and photography, “Unflattering Photos of Fascists: Authoritarianism in Trump’s America.” Schwilk’s intention was to find a modicum of humor in the costumed display and ostentation of the alt-right, and in the Hoppean Snake, there is something at first glance that’s comedic: the smiling crayon-colored reptile and the plunging stick figures, the deluded implication of a communist threat in U.S. politics (Who are these commies? I ask myself. The corporate capitalist dollar-drenched Democrats Nancy Pelosi and Chuck Schumer?), all of it suggestive of ignorant, harmless folk propaganda. But this imagery, and the history it evokes, is far from harmless.

The origin of the name, when Schwilk first related it, seemed to strain belief. Prior to his entrance into the limelight of the epic realm of far-right struggle, Hans-Hermann Hoppe, a German-born immigrant to the United States, was a mostly forgotten libertarian economist who served out his days in the dungeons of academia at the University of Nevada, Las Vegas. Hoppe’s claim to fame in the small world of libertarian economics was as second-stringer and all-around gopher to his hero and intimate friend, Ludwig von Mises, who was considered, alongside Friedrich August von Hayek, one of the leading lights of the so-called Austrian school of economics. The Austrian school posited that there was no such thing as society except as a concatenation of individual choices in the marketplace. The individual was all; society was a mere afterthought of the many atomized creatures in it, and any attempt to aggregate the interests of the clashing atoms — say, in the form of democratic decision-making via universal suffrage — was a form of oppressive statist intervention. Hoppe’s contribution to the Austrian school was his 2001 book, “Democracy: The God That Failed,” whose title basically was the message.

“The Hoppean Snake is utilizing Cold War-era anti-communist imagery of a once-hidden history of right-wing brutality and terror that utilized U.S. military hardware.”

That the snake is “Hoppean” begins to make a kind of conspiratorial sense when you consider the career of Mises’s intellectual brother, Hayek, who died in 1992. Hayek was a big fan of Pinochet, visiting Chile in 1975 to meet with the dictator to celebrate and advise on the dismantling of the country’s programs of social welfare, the massive privatization of public goods, and the deregulation of corporate interests. Along with Milton Friedman, Hayek was among the ambassadors of neoliberalism in fascist Chile described by Naomi Klein in “The Shock Doctrine.” As historian Greg Grandin writes, “Hayek glimpsed in Pinochet the avatar of true freedom, who would rule as a dictator only for a ‘transitional period,’ only so long as needed to reverse decades of state regulation.” The concern of the libertarians — Hayek, Friedman, and their ilk — was the liberty of business to make more money but not at all the humans who were being murdered and tortured to further the great project of corporate freedom. 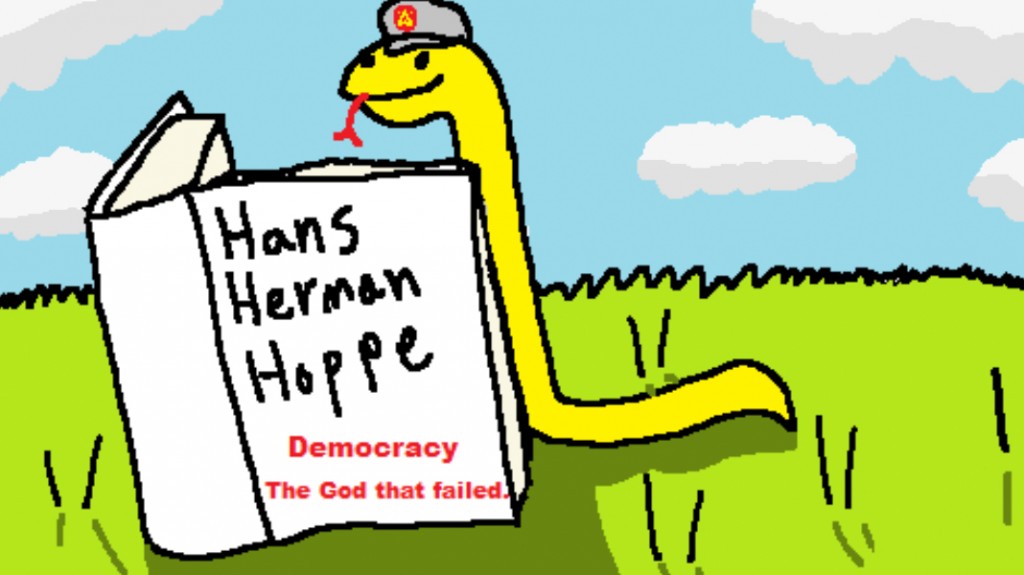 A meme depicts a snake wearing Pinochet’s military cap and reading the book “Democracy: The God That Failed” by Hans-Hermann Hoppe.

What garnered Hoppe the far right’s honor of associating him with Pinochet’s homicidal regime, however, was not the introduction of neoliberalism in Chile but specifically his musings about the democratic god that failed. Hoppe contends that the “physical removal” of undesirable citizens will be required in a putative libertarian “compact.” “There can be no tolerance,” he writes, “toward democrats and communists in a libertarian social order. They will have to be physically separated and expelled from society. Likewise, in a covenant founded for the purpose of protecting family and kin, there can be no tolerance toward those habitually promoting lifestyles incompatible with this goal. They — the advocates of alternative, non-family and kin-centered lifestyles such as, for instance, individual hedonism, parasitism, nature-environment worship, homosexuality, or communism — will have to be physically removed from society, too, if one is to maintain a libertarian order.”

When I wrote Hoppe to ask, as I put it in an email, about his name “being associated with a meme that celebrates mass murder,” he replied, “Your question — and insinuation — indicates that you are completely ignorant regarding my person and intellectual work. Even by the low intellectual standards of most contemporary journalists and journalism, then, [it] strikes me as scandalous and impudent.  As even a cursory study of my website would reveal, for more than 40 years I have been an intellectual champion of private property right, free markets, freedom of contract and association, and peace.”

When I pressed him about the tying of his ideas to the snake meme, he wrote back, “What do I know?  There are a lots of crazy people out there!” Perhaps he should communicate this to the extremists who have adopted him as an avatar for a doctrine of terror.

The post What the Far-Right Fascination With Pinochet’s Death Squads Should Tell Us appeared first on The Intercept.