The deported head of the University of the South Pacific, Professor Pal Ahluwalia, says his expulsion from Fiji is “a classic case of beating the whistleblower up,” and he has vowed to continue in the role from Nauru.

In an interview with ABC Pacific Beat from Australia, Professor Pal Ahluwalia has detailed his sudden arrest and deportation, reports Pacnews.

He and his partner, Sandra Price, both Australian citizens, were detained in their home in the Fiji capital Suva by police and immigration officials around 11pm Wednesday night, and put on a plane bound for Brisbane yesterday morning.

“I said I need to know who you are before I open the door, and [the officer at the door] said, ‘if you don’t open this door within three seconds, and we’ll break the door down’.

“So we let him in,” he told Pacific Beat.

“I was trying to speak with the Australian High Commissioner and about four people manhandled me and grabbed my phone off me, and really sort of roughed me up.”

He said the officers later apologised.

In other developments today:

Still vice-chancellor
Professor Ahluwalia said he remained the vice-chancellor of USP, and has told the ABC he plans to fly to Nauru and will continue his administration of the regional body from there. 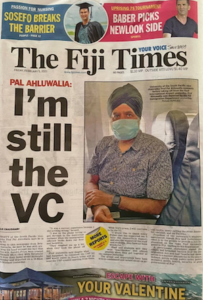 In a statement, the Fiji government claimed Professor Ahluwalia and Price were ordered to leave Fiji after continuous breaches of the Immigration Act.

“No foreigner is permitted to conduct themselves in a manner prejudicial to the peace, defence, public safety, public order, public morality, public health, security or good government of Fiji,” the statement said.

No specific details of the alleged breached were provided.

Professor Ahluwalia believes he was deported because he raised concerns about widespread mismanagement at the university under his predecessor.

“I don’t believe either Sandy or I have done anything wrong”.

“This is a classic case of beating the whistleblower up,” he said. 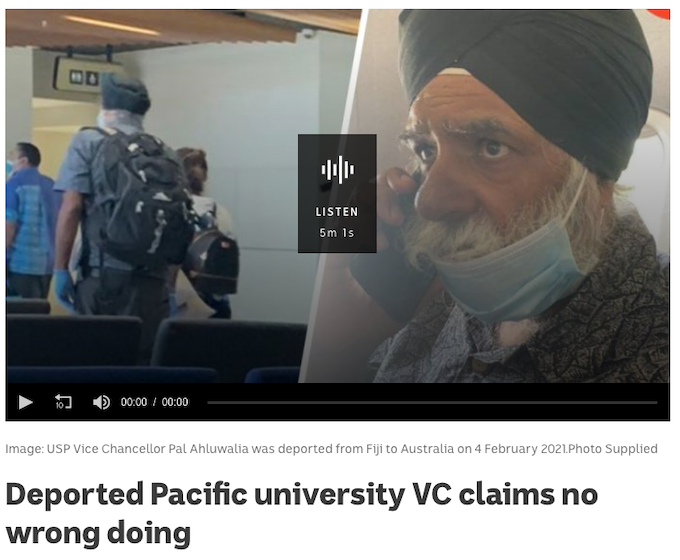 In a confidential report that was later leaked to the media, he alleged widespread financial irregularities under his predecessor Professor Rajesh Chandra and the current pro-chancellor Winston Thompson, including massive salary increases, misappropriation of allowances and unearned promotions.

The report prompted an investigation by USP which substantiated some of his findings and called for stronger oversight by the University Council.

Despite that USP’s executive committee suspended him last year, a move which prompted protests from students and staff, and was later overturned by the council.

As the Council meeting has begun I am not allowed to join. Please keep praying. pic.twitter.com/azJw1AAAdt

On his Twitter feed today, Professor Ahluwalia said he and his wife Sandy were “overwhelmed by the support we have received from staff, students and globally”.

“We are humbled and inspired by your prayers,” he added.