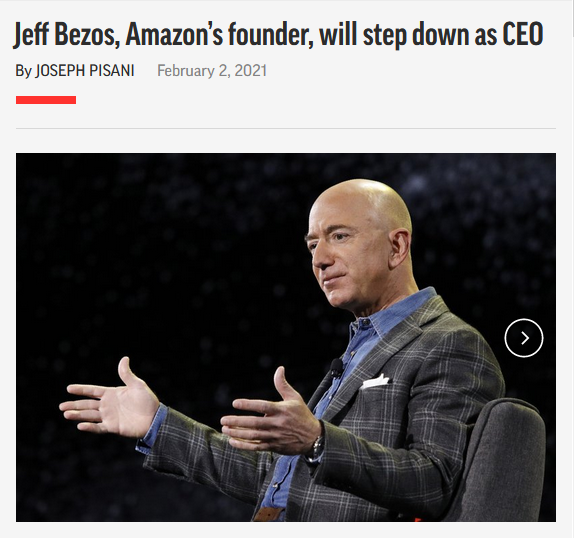 Amazon, AP (2/2/21) reported, “has gone far beyond selling paperbacks. It now produces movies, makes sofas, owns a grocery chain and even has plans to send satellites into space to beam internet service to earth.”

Papers across the country carried the news that Amazon founder Jeff Bezos is stepping away from the CEO role. Readers of stories like AP‘s February 2 report heard once again the story of how Bezos, having “quickly determined that an online bookstore would resonate with consumers,” took that idea and “built it into a shopping and entertainment behemoth,” how what started in a Seattle garage is now one of the world’s most valuable companies, “worth” some $1.7 trillion, “swelling” Bezos’ own riches along the way. We learned that Bezos will soon have more time for “side projects,” one of which is, you know, the Washington Post.

There’s a mention toward the end of “calls for greater regulation,” but you can read this story with a magnifying glass and find not a hint of the concurrent major news story: that the Federal Trade Commission had to force Amazon to pay some $62 million for stealing tips from their delivery drivers, nearly a third of their tips over a two-year period, according to FTC chair Rohit Chopra.

As reported in Vice (2/2/21) and elsewhere, Amazon advertised that independent contractors who deliver packages in its Flex program would receive—no, not healthcare or sick pay, don’t talk crazy—but “100% of the tips” they earned, on top of an $18 to $25 hourly rate. But right away, the FTC found, Amazon “quietly changed course,” slashing payments to drivers and cutting into their tips to make it appear as if though it was still paying the promised hourly rate. Drivers who complained? Got cookie-cutter emails falsely claiming they were still paying 100% of tips, right up until Amazon learned the FTC was onto them.

Media reported the story—though, as Alan MacLeod noted at Mint Press News (2/3/21), headlines talked about “allegations,” when the story is about an FTC ruling, and about Amazon “withholding” tips, when what they did was steal them. Media reported the story; but by making wage theft and deception—besides Amazon‘s tax avoidance, dangerous workplaces and union busting—a separate story on a separate page from that of Wonderboy Bezos and the Company That Could, corporate media are going out of their way to protect the narrative of the “self-made” magnate, his ungodly profits earnestly come by, and to resist what might be the natural tendency of readers to put what Jeff Bezos calls his “Amazon winnings” in the context of broader societal costs.