Pacific Islands Forum chair Kausea Natano has described the University of the South Pacific as a “shining example of regionalism” and called for due process in the wake of the shock deportation of the 12-nation institution’s vice-chancellor this week.

“The university is a shining example of regionalism and an institution that we cherish for over 50 years because it nurtures our greatest treasure, our youth and future leaders,” said Natano, who is also Prime Minister of Tuvalu, in a statement.

In other developments yesterday amid shock around the region, the USP Council appointed Dr Giulio Masasso Tu’ikolongahau Paunga as acting vice-chancellor and established a sub-committee to investigate the sudden deportation which was ordered by the Fiji government without consultation with the university.

“The removal of the vice-chancellor [Professor Pal Ahluwalia] from Fiji has caused consternation among students, staff and forum members,” Natano said.

“As is the Forum, USP is governed by its Royal Charter, convention, statutes and ordinances and the USP Council must ensure that due process is followed.

“With this in mind, I encourage the USP Council to negotiate a way forward through this and other challenges to come.

“I ask that we all remain mindful of the welfare of our USP students and staff, and do our utmost to uphold the integrity of our regional institution”

Dr Paunga, who currently holds the position of deputy VC regional campuses, estates and infrastructure, was appointed following the deportation of Professor Ahluwalia to Brisbane, Australia.

Professor Aluwhalia and his wife were arrested at their Suva home on Wednesday night, told they were deemed a threat to the Fiji public, and swiftly deported to Australia.

The USP Council released a statement saying it was not consulted over Professor Pal Ahluwalia’s deportation. 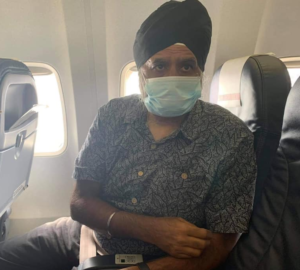 The council stated that it has not dismissed Professor Ahluwalia and expressed disappointment that it was not advised, as his employer, of the decision by Fiji’s government to deport him.

The council has established a sub-committee, chaired by Nauru President Lionel Aingimea, including the council representatives of Australia, Tonga, Niue, Solomon Islands, Samoa and two USP senate representatives to look into matters surrounding the controversial deportation.

The meeting also discussed the possibility of a vice-chancellor being based in and operating out of another country apart from Fiji.

The sub-committee is due to bring recommendations on these matters to the council as soon as possible.

This article is republished under a community partnership agreement with RNZ.