The farmers’ protest against Prime Minister Modi’s agricultural law drew international attention after American pop artist Rihanna tweeted in support. Several other global personalities have since extended support to the movement, leading the Indian Ministry of External Affairs to issue a statement and Indian celebrities to tweet in favour of the government’s policy. An overwhelming number of media outlets have also alluded that the international support is a global conspiracy against India.

The latest news widespread across media organisations is that the United States ‘backed’ India’s farm laws. “US backs India’s new farm laws, says these reforms will improve the efficiency of markets,” tweeted ANI on January 4. ANI’s report was carried by Catch News, Business Standard and The Economic Times.

The Times of India and Times Now republished a similar story by PTI.

Livemint also claimed that the US ‘backed’ farm laws in India.

Among the Hindi media channels that published the same was CNN News18 and Amar Ujala.

Republic Bharat and Dainik Jagran went a step ahead and reported that the US said the farm laws will increase the impact of Indian markets in the world.

The same was later tweeted by BJP Punjab. 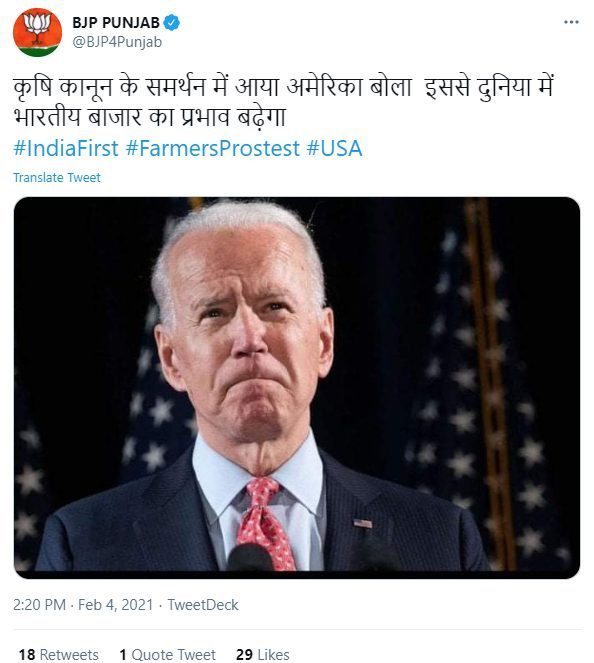 While NDTV’s title did not reflect US backing of the laws, the article said, “Indicating that the new Biden administration is supportive of the Indian government’s move to reform the agricultural sector that attracts private investment and greater market access to farmers…”

The report by ANI mentions the following statements by the US State Department:

“We recognize that peaceful protests are a hallmark of any thriving democracy, and note that the Indian Supreme Court has stated the same.”

“We encourage that any differences between the parties be resolved through dialogue. In general, the United States welcomes steps that would improve the efficiency of India’s markets and attract greater private sector investment.”

The PTI report added a third statement which was cut short in ANI’s report – “In general, the United States welcomes steps that would improve the efficiency of India’s markets and attract greater private sector investment.”

This does not explicitly refer to the farm laws. Furthermore, both reports published by multiple news outlets failed to highlight other aspects of the US government’s statement, especially internet shutdown.

“We recognise that unhindered access to information, including the internet, is fundamental to the freedom of expression and a hallmark of a thriving democracy,” reads the statement, also reported by Al Jazeera and reiterated by US Embassy spokesperson in Delhi.

US embassy spox in Delhi (in a statement similar to the US State Department) on farmers’ protests:

“We recognize that peaceful protests are a hallmark of any thriving democracy, and note that the Indian Supreme Court has stated the same.”@IndianExpress

News agencies ANI and PTI failed to report the US government’s stance on internet shutdown in India and inferred that the country backed farm laws even as the statement says that the US “in general” supports agricultural reform and has not specifically backed the legislation. It has called for dialogue between parties and commented on internet shutdowns. The response of the Indian Ministry of External Affairs can be read here.