A photo of a policeman holding stones in both hands has been viral on social media platforms for quite some time. Users claim that this is a scene from the farmer protests against the centre’s new farm bills. The months-long agitation turned violent in Delhi on January 26. Violent clashes broke out between the police and protesters during the farmers’ Republic Day tractor rally. The Delhi Police used tear gas bullets and lathi-charge to disperse crowds. After this, on January 29, a group of people pelted stones at protesting farmers at the Singhu border. Those asking the farmers to clear the area identified as ‘locals’. Alt News found in its fact-check that BJP workers and members of the Hindu Sena were part of this group claiming to be locals.

People are also sharing a second photo of a policeman with a stone in hand. “The pictures speak for themselves, this is what is happening in my country,” reads the accompanying claim. (Archive link)

Many other Twitter users also shared this picture with the hashtags #farmersprotest and #rsskegunde (RSS goons).

The image is being shared widely on Facebook as well. A Facebook page called ‘Jumla Vahi Sunayenge’ posted the image. This post was shared by more than 1,200 users at the time of writing. (Archive link) 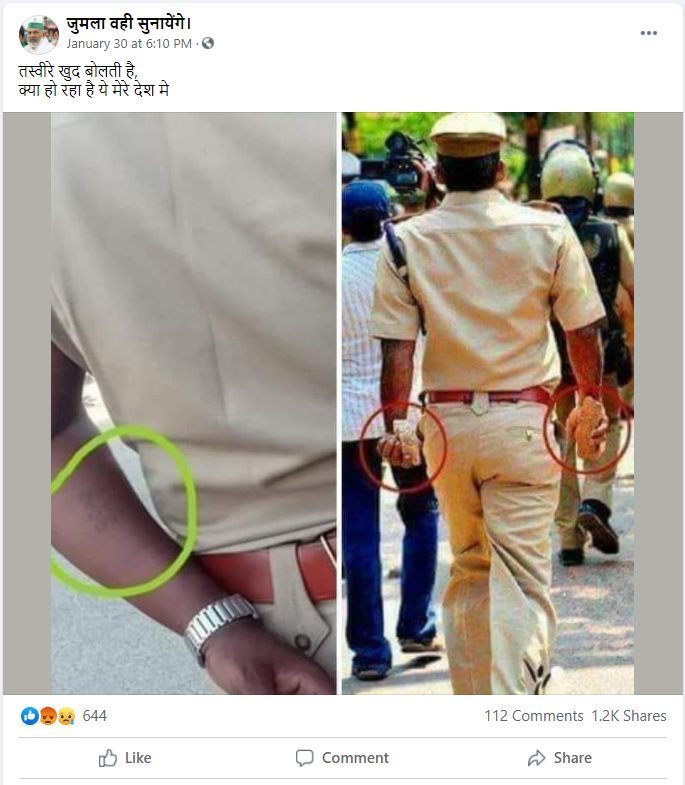 Alt News performed a reverse image search and found a high-quality version of the photograph on the Nirmalagiri College SFI Facebook page. The SFI (Students Federation of India) is a left-wing student organization aligned to the Communist Party of India. This photo was uploaded on August 23, 2013, without any description but along with pictures of demonstrations.

We contacted the Secretary and the President of the SFI unit of Nirmalagiri College. They were unable to provide more information about the photo. We did not find a high-quality version of the viral image anywhere else apart from this page. Since this picture was uploaded on August 23, 2013, it cannot be representative of the farmers’ protest.

We performed a reverse image of the first picture in which only one hand of a cop is visible, and came across some tweets from last year. Twitter user @single_life_000 posted a tweet on February 16, 2020, along with three pictures of a cop’s hand. The original Tamil caption read, “Police or sly people? #CAAProtest #Chennai #ChennaiBagh #ChennaiShaheenBagh #Chennaiagainst_CAA_NRC #ChennaiPolice # CAA_NRC_Protests #வீதிக்குவாங்க_ரஜினி. A closer look at the photo shows that the policeman has a tattoo spelling out ‘RSS’ on his forearm.

Users are writing #rsskegunde (RSS goons) while sharing this picture. We were unable to gather more information on this photo. It is possible that ‘RSS’ may represent the police officer’s initials. Nothing can be said with certainty except for the fact that the images are old hence unrelated to farmers’ protest.

The second photo went viral during the anti-CAA protests as well. Boomlive had fact-checked it in February 2020.