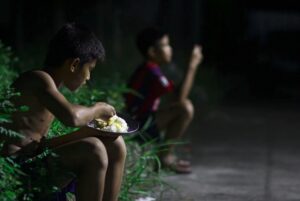 Racism is one of the major social justice issues of the modern era. It can be seen in all corners of the globe, and in virtually every industry, negatively impacting minority communities and overall public health. The global food system is no exception.

As a niche dietary movement, veganism is particularly problematic, with various news sources referring to the community as “elitist,” and even demonstrative of white privilege. To those social critics, the very idea of an individual choosing what he or she will (or won’t) eat is a virtual impossibility for impoverished minority populations.

But it hasn’t always been this way.

When you look at it from a global standpoint, in fact, veganism is primarily a product of non-white cultures. After all, India is home to more vegetarians than any other country on Earth, more than 400 million of them. While less popular, vegan diets are also common, primarily among the most devout practitioners of the country’s major religions, including Hinduism and Buddhism. Both belief systems emphasize the practice of ahimsa or non-violence towards all beings. Accordingly, the consumption of animals does not align with ahimsa.

It’s a different story in the U.S., where meat-eating is akin to a national pastime. Indeed, in 2018, Americans set a record for annual pounds of meat consumed, averaging a whopping 220 pounds per person. Conversely, only about 3% of the U.S. population considers themselves vegan, avoiding all food and ingredients that come from animals.

Yet research indicates that veganism is on the rise across America, and African-Americans are the most frequent converts, at a rate of nearly 3-to-1. According to BBC News, many Black Americans view the vegan movement as a tool for both social change and improved health. And those beliefs aren’t simply wishful thinking: veganism and social justice often go hand-in-hand.

It’s important to note that, as a lifestyle, veganism encompasses much more than mindful dietary choices. Many of those who adopt a vegan diet also choose not to purchase and/or use items that are made from animals, from textiles to household goods and beyond.

Unfortunately, however, the vegan community has been known to overlook humanity’s needs in favor of animals and the natural world itself. The primary tenets of veganism are advocating for animals that have no voice of their own, a mindset known as “speciesism,” as well as reducing the effects of climate change. In many vegan circles, the rights of animals are prioritized over that of people, especially those who identify as Black, Indigenous, and People of Color (BIPOC).

Thus, with racial tensions nearing a breaking point across the U.S., it’s more important than ever for the vegan community, as well as the global food system, to shed their racist pasts. Accountability is a key factor in the push to end systemic racism within the food system, and various potential solutions exist. Let’s take a look at what’s at stake, how we got here, and how the vegan community can help create lasting social change.

From the Environment to Public Health: Reasons to Go Vegan

The rise of veganism in the 21st century is rooted in several beliefs and causes. Religious adherence and environmental concerns are among the most common reasons why people from all walks of life choose to consume a plant-based diet. Yet for many within the vegan community, the decision to stop eating meat comes down to basic knowledge: that of knowing where your food comes from.

An unfortunate side effect of modern life is that most of us consume whatever types of food are available to us, no matter the source or nutritional value. Highly processed foods are ubiquitous within U.S. supermarkets and convenience stores, along with unhealthy ingredients including high-fructose corn syrup and chemical-based food dyes. Where meat, produce, and dairy products are concerned, you must also consider the impact of factory farming, in regards to both animal cruelty and racial inequality.

Yet, for Americans living in marginalized communities and/or food deserts, the concept of choice doesn’t really factor into the equation. And therein lies one of the biggest pitfalls of modern veganism — it’s simply “not culturally adaptable or accessible for all people around the world,” writes Jenna Ruzekowicz for The Stanford Daily. What’s more, wealthier vegans often demonstrate a woeful lack of understanding of just how crucial meat is to many cultures.

Food as a Social Justice Movement

Make no mistake: cultural sensitivity is a necessary ingredient in the fight to quell systemic racism within the U.S. food system. Put simply, being culturally sensitive means that you make the effort to understand how an individual’s background forms the core of their beliefs, and influences thoughts, feelings, habits, and behaviors.

When it comes to a particular individual’s dietary choices, the vegan community must therefore avoid gatekeeping and remain open-minded to the vast differences among people. For marginalized groups, there may be many barriers to adopting a vegan or plant-based diet, despite the inherent health benefits. The inaccessible high cost and potential unavailability of fresh, healthy foods are two of the most notable barriers.

One’s occupational status may also be a huge factor in terms of dietary choices, as racism within the food system isn’t confined to the consumer level. Historically, farming has been confined to white America, at least where land ownership and profits are concerned. Only about 1.3% of U.S. farm owners or operators are Black, and they typically earn much less than their white counterparts. In comparison, more than 80% percent of farm laborers are non-white, BIPOC, reports Triple Pundit.

This type of racial disparity is unfortunately rampant across all corners of the global food system. The good news is that there’s been plenty of pushback in recent years, wherein marginalized populations are taking greater control of their food choices.

The Rise of the Plant-Based Diet in Minority Communities

As more and more people learn about the potential upsides of a vegan lifestyle, the diet has breached all corners of society. Gardening has become somewhat of a guerrilla act in various urban settings, and may even serve to help marginalized populations heal from a long history of racism. Urban gardens provide access to healthy, fresh food, but they also strengthen communities and can improve public health overall.

Especially in a society that’s saturated by social media, the endorsement of a celebrity to a particular cause, such as veganism, truly does have the power to change people’s minds. Where consumer behavior and corporate profits are concerned, various data supports the idea that celebrity endorsement works. To wit: “A celebrity endorsement increases a company’s sales an average of 4% relative to its competition,” according to USA Today. That influence effectively translates to social justice causes and lifestyle choices as well, including veganism.

Tools for Systemic Change Within the Global Food System

Yet true systemic change also requires real effort from the general public, not only celebrities. The vegan community and food distribution companies alike must strive for accountability, by acknowledging any harm they may have inflicted on BIPOC communities, and actively working to support those communities. Vegan BIPOC must be given a voice and the opportunity to bring the message of ahimsa to marginalized communities across the U.S.

On an individual level, you can support BIPOC vegans by supporting minority-owned businesses, no matter the products or services provided. And as today’s gig workers are poised to become the leaders of tomorrow, the food industry must support every worker, regardless of race, class, or dietary habits. Resilience and adaptability come with the territory for many of America’s BIPOC, traits that are vital to future success, whether as a vegan business owner or environmental advocate.

Those who adopt a vegan lifestyle don’t do so lightly. To the bulk of the community, veganism offers a tangible method towards systemic change and environmental stewardship. Yet veganism also has a problematic past, wherein minorities have been historically underrepresented. In our abundantly diverse world, cultural sensitivity and increased business opportunities for BIPOC hold the key to lasting change within the food system, as well as overall public health.

Ultimately, veganism comes down to the freedom and opportunity to make mindful choices about what you eat. Unfortunately, that isn’t possible for every American. BIPOC are especially underrepresented within the vegan community, although plant-based diets are historically rooted in Asia and the Middle East. It’s time to acknowledge the pervasive racism with the national food system and work to mitigate food deserts and inequality, while also advocating for more healthful eating on a national scale. Finally, we must leave racist ideals and systems behind for good, both for the health of the planet and people from all walks of life.

Beau Peters is a freelance writer based out of Portland, OR. He has a particular interest in covering workers’ rights, social justice, and workplace issues and solutions. Read other articles by Beau.

This article was posted on Thursday, February 4th, 2021 at 11:15pm and is filed under and People of Color (BIPOC)., Animal Cruelty, Health/Medical, Life/Animal Rights, Racism, Speciesism, Vegetarians/Veganism.