By Lusa News in Dili

The Timorese Press Council today asked journalists to avoid being “messenger boys”, referring to the publication of a statement about former Timor-Leste president Xanana Gusmão’s controversial visit to a former priest accused of child abuse without identifying the source.

“Journalists are urged to reflect on their role in society and to refuse the function of mere passive message transmitters, messenger boys,” said a statement released today by the Press Council (Conselho De Impreza or CI).

The note was distributed after a press conference to analyse the Timorese media’s coverage of the visit that Gusmão made in late January to the house where former Father Richard Daschbach, accused of paedophilia and other crimes , is under house arrest.

The Press Council said that five Timorese media outlets – the public news agency Tatoli, the online newspaper Oekussi Post, the private television GMN and the newspapers Diário and Independente – covered the visit, relying exclusively “on a statement delivered by the delegation of Xanana Gusmão”.

“The journalists replicated the statement, made few or no changes to the press release, not attributing its origin, and did not go further in the coverage,” Virgílio Guterres, president of Press Council told reporters today.

The council also highlights that in three media outlets the text was signed by a journalist, “which constitutes (…) plagiarism”.

For the Press Council (CI), there was “a total dismissal of journalistic activity, not checking, not looking for the contradictory, not diversifying sources, not looking for rigour and truth”, violating the law and the journalistic code of ethics and discrediting an activity that or “vigilant of the instituted powers and of the Democratic Rule of Law”.

‘Absence of plurality’
The council questions the “absence of plurality”, when the five outlets published “equal” texts, and the fact that the texts contain “omissions that make the news biased, not effectively fulfilling its mission to inform”.

Guterres said that the statement “aimed at an objective, like any public act, in which journalists agreed to participate, choosing to defend a particular interest rather than the public interest”. 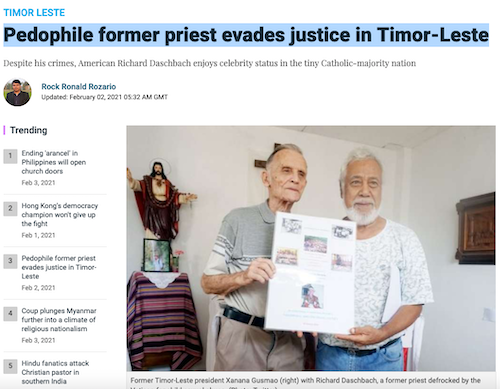 How UCA News reported the controversy and the photo of Xanana with the ex-priest Richard Daschbach. Image: APR screenshot

After the criticism that the news provoked, some newspapers chose to correct the reference to Daschbach from priest to ex-priest, “but without any explanation for this change”, deleting or altering other paragraphs.

The published texts also feature a long biography of the target, “omitting relevant information”, including the fact that he was expelled from the Vatican and was accused of the crimes of paedophilia and child pornography.

“By referring in his biography only to positive facts of his journey, the media thus contribute to convey a false image of the target, disagree with reality, in a clear whitening process”, he maintains.

In addition, the texts have references “that are clearly assumed as rhetorical resources to awaken feelings of compassion and empathy in the reader”.

Guterres considered that the coverage “failed, by not presenting relevant journalistic facts”, being “unbalanced, with the intention of changing the public opinion about the accusation against the former priest”.

Reporting facts without fear
Asked by Lusa about whether the Timorese “media” were afraid to cover this case, Guterres recalled that this was the first time “that a member of the clergy is brought to justice” in Timor-Leste. 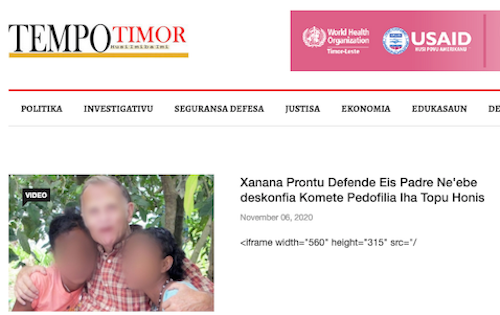 The important role of the Catholic Church in society, he said, had led to a less-than-expected media reaction, although some publications, such as Tempo Timor, had been essential in making the case known.

“We recognise that the fear-inhibiting effect exists. But now we need to report facts without fear,” he said.

Regarding the coverage of the case by Tatoli, the fact that it was a public news agency should demand increased responsibility, and its journalists “must have honesty and humility to recognise failures and mistakes and accept criticism,” he said.

Last week, the Timorese Episcopal Conference called on the Catholic community in Timor-Leste to respect Pope Francis’ decision to expel Daschbach from the priesthood.

In October last year, the representative of the Holy See in Dili told Lusa that the Vatican “has no doubt” that the former priest is guilty of these crimes.

Daschbach, 84, detained in 2019, is accused of abusing at least two dozen children at the orphanage where he worked, Topu Honis, located in the Oecusse enclave.

The penal code provides for maximum sentences of 20 years in prison for sexual abuse of children under 14 years, increased by one third if the victims are under 12 years old.