Janine Jackson interviewed Open Society’s Bama Athreya about defending gig workers for the January 29, 2021, episode of CounterSpin. This is a lightly edited transcript. 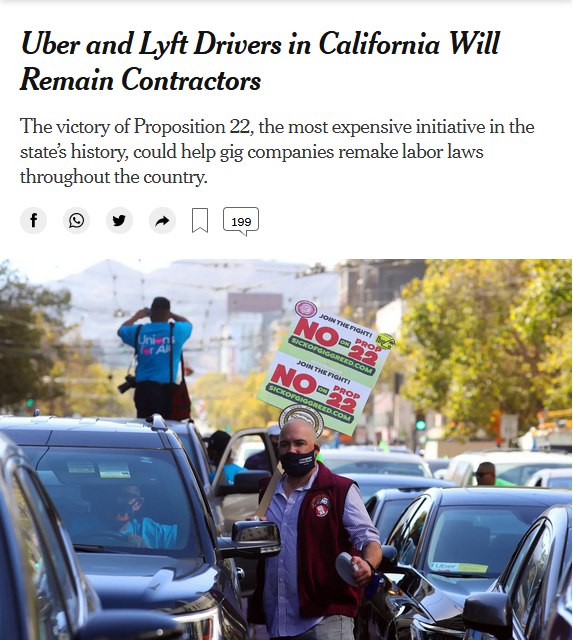 Janine Jackson: Uber, Lyft and DoorDash spent some $205 million on California’s Prop 22, the most money ever spent on a ballot initiative. For big money, these so-called gig economy companies won themselves a big prize: the continued ability to evade labor laws by deeming their drivers independent contractors rather than employees.

When the initiative they crafted and promoted exhaustively passed, with attendant measures making it near impossible to overturn, the New York Times noted ominously that it “opens a path for the companies to remake labor laws throughout the country.”

Paths, of course, can be blocked. What it would take to do that, in the case of what she calls the “lawless digital economy,” is the topic of a recent article by our next guest.

Bama Athreya is an economic inequality fellow with the Open Society Foundations, and the host of the podcast The Gig. She joins us now by phone. Welcome back to CounterSpin, Bama Athreya.

Bama Athreya: Hi, nice to be here. Thank you, Janine.

JJ: I think we can trace the contours of the problem in your recommendations for response, so I want to get into that. But just to say, first, your starting point is that the work now calls both for people working on labor policy and people working on digital policy, and, emphatically, those two groups working in concert.

BA: Yes, I think we have had a lot of great work done in recent years by labor law advocates—groups like the National Employment Law Project come to mind—on the issues of misclassification, and how gig work is really just disguised employment. Not to repeat all of that great work, but I think it is constrained by the lack of a bridge between the labor rights advocates and the people who really understand the digital rights aspect of the problems, and what these companies are really doing. 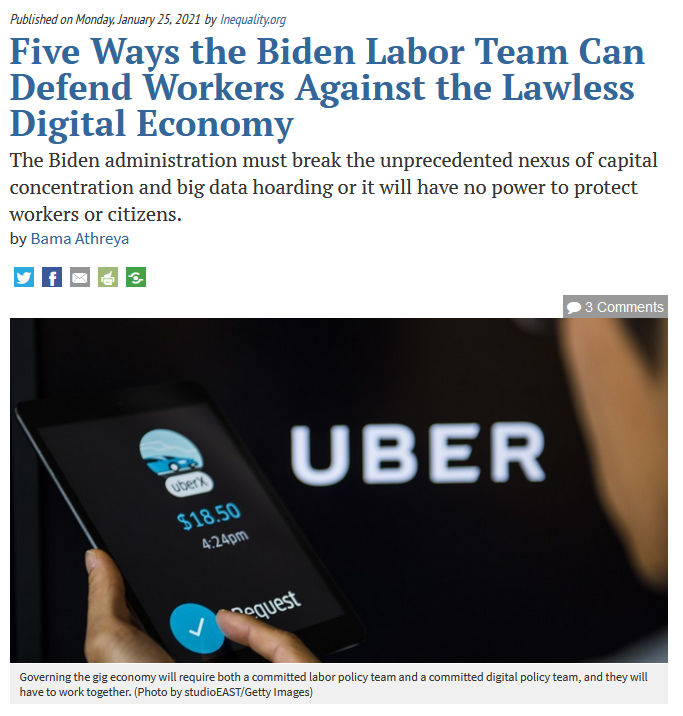 JJ: The piece on Inequality.org is titled, “Five Ways the Biden Labor Team Can Defend Workers Against the Lawless Digital Economy”; folks can find the full piece online, but let’s at least touch on those ideas. And No. 1 is really No. 1.

BA: No. 1 is the simplest piece of this, and it’s something, again, that, frankly, the entire US labor movement has been calling for for years, and that is raising the minimum wage. You know, all of this is actually quite simple; none of it is hard—it’s just lack of political will.

We know that the reason why a lot of people take on gig work, they’ve reported it themselves—it was even part of the Prop 22 campaign, to my amazement—is that they can’t survive on full-time jobs. And so, in addition to working full time, a lot of people, including a lot of the drivers that I interviewed, were taking on extra hours. And that really has benefited the gig companies. But if those people were making minimum wage, and if they had access to affordable childcare so that they were unconstrained to leave the home and enter the formal labor market, that’s a big piece of what is needed.

Now, as I said, that’s not the whole piece; that’s the piece that I think is probably best articulated by people who are in the labor movement, or labor advocates, labor law specialists.

There are a couple of other pieces of this. I just mentioned misclassification, ending disguised employment. That, too, is something that I think really—you know, I’m not the expert; there are lots of great people out there that have recommendations, and the proposals that are needed, and that are already in law. And so a lot of this is actually just about having a Labor Department that’s willing to enforce what’s already in law and end misclassification.

Where the ideas are that are new and specific to the digital economy have to do with data, and data rights. And, should I just get into that? 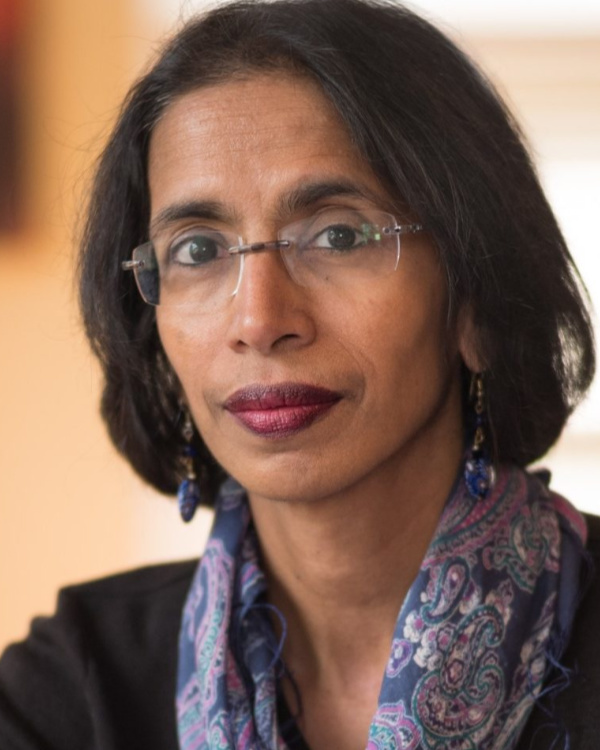 Bama Athreya: “A lot of this is actually just about having a Labor Department that’s willing to enforce what’s already in law and end misclassification.”

BA: OK. So I think one of the things that labor advocates have not yet really gotten control of is that the labor itself is only a piece of what these companies are capitalizing, right? Yes, they want the gig worker to do the work, but they also really, really, really want the gig workers’ data. And the data mining of everyone who engages in that work, and the use of it for multiple purposes, which I get into a little bit in the piece and in other pieces, is where the real corporate interest is. And it’s also quite dangerous, because we’re seeing this confluence of forms of monopoly power that we’ve never seen before.

This is what’s qualitatively new about the digital economy: We’re both seeing unprecedented levels of capital concentration: Think about a company like Amazon, which has pretty much crowded out this space for many others, not just in the United States, but around the world. And so there’s the capital concentration and the market monopolization.

But there’s also data monopolization; the reason they’ve been able to do it is because they’ve been able to monopolize data. And that, too, is what companies like Uber want to do. They want to crowd out all the competitors by having the best possible data on the information that’s needed to really control transportation markets in municipalities around the world. So to fight back effectively, workers are going to need to get access to the rights over that data, and they’re going to need to have the bargaining power to negotiate what’s done with it.

JJ: You describe the business model as “unsustainable and exploitative.” And I think folks can grok the exploitation as we learn more about it, but you don’t hear very much about this model being unsustainable. What do you mean by that?

BA:  So that relates back to the point I just made about data monopolization. Think about it as a tragedy of the commons: If we had a company that could only stay in business by taking over a natural resource that was part of the commons, that was meant to belong to the commons, such as extracting water from a community…. To give you a real example of this, this is something, for instance, that Coca-Cola has been on the hook for, and the subject of campaigns around the world, because they tapped into water tables, depriving local communities of water in order to make this product, right? That is unsustainable.

In the same way, this extraction of data is really, if we had those digital rights, if we were able to control the commons—because it is a commons—you’d find that these companies had very little advantage in a traditional (let’s take Uber once again) transportation market: We know that a lot of the valuation of the company has been artificial, and has been driven by the tech bubble.

BA: We also know that they have continued to push down the fares that drivers receive. And in part it’s because they’ve tried to crowd the market, bring more people onto the platform, and then push down the actual costs and the price that they offer to drivers. But if you look at all of that, in the context of a regulated transportation market, they could never survive. So it’s both the fact that if they didn’t have the data, they wouldn’t be competitive (or if they had to pay for the data), and it’s also the fact that they’re using the data to manipulate labor market conditions and prices downward, in ways that a traditional company could not do, and so there’s not a level playing field.

JJ: Sort of leading off from that, before Prop 22, when the court in California ordered DoorDash and Lyft and Uber and these companies to hire their drivers, ordered them to comply with labor law, Uber and Lyft threatened to shut down in California rather than comply. Their official company posture was, “We don’t wanna.”

I feel like government will allow, and pundits sometimes will turn a blind eye to, people who go under—This is very sad, that’s too bad for them—but somehow we rarely or ever hear it stated plainly: If Uber can’t do its business in a way that serves workers and the public interest, then Uber should go out of business. That idea is somehow unserious.

BA: It’s so interesting with this work that I’ve been doing in other countries and looking at other cities, it’s been so amazing to me how brazen sometimes these companies are at going to municipal or state governments, and claiming they can’t possibly do business if they’re forced to abide by the regulations that other firms abide by. And then, in other countries, when they’ve been told “no,” they figured it out.

BA: So some of that is just purely like they’re just…

BA:  It’s kind of a crazy ethos in the sector that really seems to be premised on, “If we can get away with it, let’s get away with it.” As opposed to coming into a market and saying, “Let’s figure out what the local regulations are on how we do business in this jurisdiction.”  The stories range from London to Johannesburg to Sydney, Australia, and in different ways, court cases coming up in multiple jurisdictions that have pushed back and said, “Well, no, you are going to abide by local regulations,” and then either they abide by the local regulations, or they don’t exist; but somehow other transportation firms manage to take over the market. So it’s not that people are not getting around in those places where Uber cannot operate.

JJ: Well, we’re going to end on that note. We’ve been speaking with Bama Athreya. Her piece, “Five Ways the Biden Labor Team Can Defend Workers Against the Lawless Digital Economy,” is up on Inequality.org. And you can learn more about the podcast The Gig at TheGigPodcast.com. Bama Athrey, thank you very much for joining us this week on CounterSpin.

BA: Thank you so much. It’s been a pleasure.