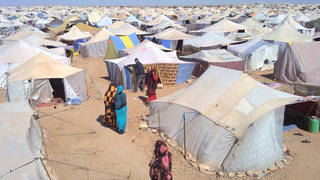 President Donald Trump broke with decades of U.S. foreign policy in the waning days of his administration and recognized Moroccan sovereignty over Western Sahara, a territory the country has occupied since 1975 in defiance of the United Nations and the international community. U.S. recognition came as Morocco agreed to establish diplomatic relations with Israel, becoming the fourth Arab nation to do so in recent months as part of a regional push by the Trump administration to strengthen Israel without addressing the Palestinian conflict. Now the Biden administration must weigh whether to reverse Trump’s decision on Western Sahara. “It’ll be very dangerous if Biden does not reverse Trump’s unprecedented recognition of Morocco’s takeover of Western Sahara,” says Stephen Zunes, professor of politics and international studies at the University of San Francisco. “The United Nations Charter is very clear that the expansion of territory by military force is illegitimate.”