SPECIAL REPORT: Koro Vaka’uta, an RNZ Pacific journalist, reports on a Māori-Pasifika culture shift in Aotearoa New Zealand as the country today marks 181 years since the signing of the 1840 Treaty of Waitangi between indigenous Māori and the British crown colonisers.

A brown, bicultural generation is changing the face of New Zealand.

That’s according to the Minister for Pacific Peoples, ‘Aupito Sua William Sio, who has previously told RNZ Pacific that as many as two thirds of New Zealand born-Pasifika now had Māori whakapapa as well.

He says that although the Māori-Pasifika dynamic is not a new phenomenon, there is definitely a more apparent and visible presence now.

“You go back to the 1960s and 70s when New Zealanders invited the Pacific workforce to fill the booming manufacturing industry, the freezing works and the forestry and you trace where the people were in South Auckland, in the Waikato regions in Tokoroa, Rotorua and up north, and you will find people who descend from relationships during that workplace,” he says.

“Now that our communities have migrated to the regions, they are settled, they’ve got jobs and are really putting their roots in the ground. I’m seeing that more and more.

“And I’m trying to describe it as the Generation Six Bs – people who are brown, obviously, but they’re brainy, they’re beautiful and bicultural. They’re bilingual, and they’re bold.”

Minister for Pacific Peoples ‘Aupito William Sio … “I will have ongoing conversations with my Māori caucus colleagues.” Image: Koro Vaka’uta/RNZ

So how does this shape the minister’s approach to what the government does?

“I will have ongoing conversations with my Māori caucus colleagues, I think in the last three years in regional New Zealand, we were recognising this and so were my Māori ministers, and so interestingly enough when I said to the Minister of Provincial Growth Fund at the time, I was saying ‘are you seeing what I’m seeing with this diversity of young Pasifika who whakapapa to Māori?’

“He said, ‘yes I am starting to see these long names on the land register’, and even the Minister of Youth Affairs at the time was also acknowledging that he was capturing that diversity.”

‘Aupito said these conversations would continue to see how best Māori and Pasifika could work together.

However, he conceded data could often be unreliable when it came to Pasifika and Māori people, as those collecting the information often lumped them together.

Lourdes Vano is one person who refuses to be put into a single box.

Of Cook Island, Samoan and Ngāti Kahungunu ki Wairoa stock, the university student and aspiring politician was on a journey of learning about all three cultures. 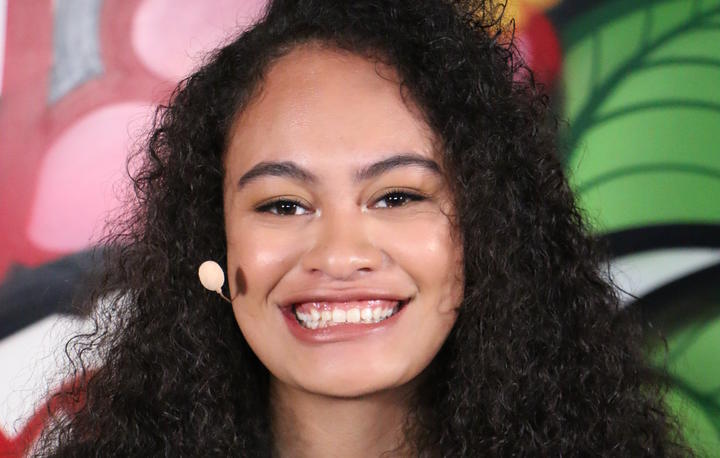 Vano’s efforts were not just for her.

“I’m also doing this so that my siblings don’t have to make too much of a trip to find out about themselves, which is a really, really important sort of taonga, a gift that I want to pass on to them.

Vano says she doesn’t want her whānau to face as many barriers as she had.

“A lot of those barriers include what has happened in the process of colonisation where things have been cut off from us or gatekept from us where we have to pay money or we have to jump through a couple of loops to get to our own history.”

For Vano, straddling multiple cultures can be challenging.

She points to Green MP Teanau Tuiono as inspiration. From Ngāpuhi and Atiu in the Cook Islands, he talked about his whakapapa during his maiden speech to Parliament in December. 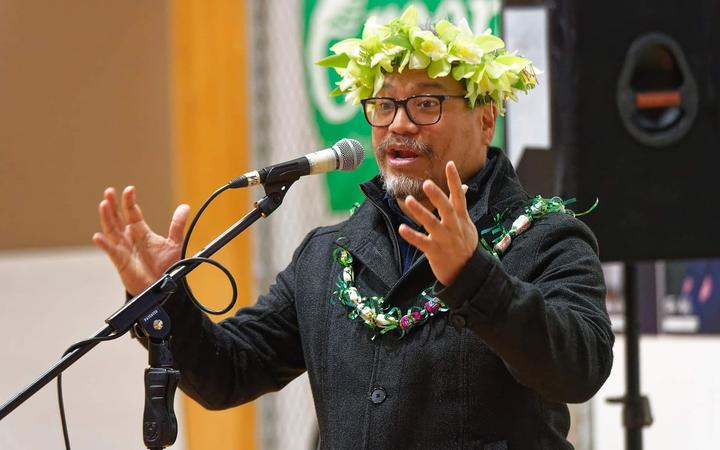 Green MP Teanau Tuiono … talked about his whakapapa during his maiden speech to Parliament. Image: RNZ

People had asked if he was half Māori and half Pasifika.

“Nah, bro. If anything, I’m whole,” Tuiono said in the House.

“I don’t think anyone is half anything. If anything, I’m double. If I was a beer, I would be Double Brown. If I was the flavour down at the dairy, I’ll be twice as nice but the only half the price. I am two peas in the cultural pod.”

Vano says she has now grown to see the beauty of being both Tagata Pasifika and Tangata Whenua.

“I did struggle with it at first trying to figure out where I fit in but I think the more I learn about these things, the more beautiful it becomes to me and how lucky I am to be able to connect to so many different places and so many very cool places.

Hine Funaki is of Ngāpuhi, Ngāti Whatua, Ngāi Tahu and Tongan heritage and is a doctoral student at Te Herenga Waka Victoria University. 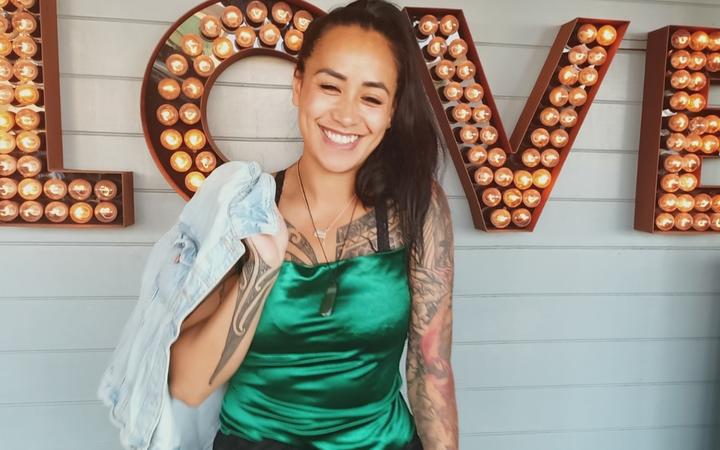 Hine Funaki … on a journey that began when she was a toddler at Kōhanga Reo and primary school where she learnt in a full immersion Māori environment. Image: RNZ

She is also on a journey. One that began when she was a toddler at Kōhanga Reo and primary school where she learnt in a full immersion Māori environment.

However, things changed at high school.

“I just went straight into mainstream thinking that, you know, it wasn’t going to get you anywhere. I kind of bought into their narrative, better off learning Spanish or Mandarin or something else so that you can travel and make money and all this Pākehā or Western concept of success. So I started trying to follow that path and it wasn’t working for me.”

Funaki dropped out of high school at 16, with no qualification, thinking that was her lot in life. She then fell pregnant at 19 and had her son at 20. Her moment of clarity.

“I just knew that he couldn’t go down that same path that I went down, and believe those lies.”

Pivotal moment
So Funaki enrolled as an adult university student and reached another pivotal moment when meeting someone who would eventually become her mentor.

“In my third year of undergrad, I had Cherie Chu, she was in Pacific education and her courses were completely different to the two years that I was doing prior to that, I was with Pākehā lecturers all the time.

Funaki continues to play it forward, mentoring young Māori and Pacific students as they try to navigate a world which has not always welcomed them.

“I can’t turn off the fact that I walk in these multiple different worlds. And so I carry that lens with me all the time and so I think of spaces all the time, physical spaces, relational spaces, theoretical spaces, and so if that space feels safe with certain people, then I feel like I can navigate it a bit more smoothly. Even if I’m still figuring it out. I can do it without feeling ashamed.

“Like I can mess up, and it’s okay, but if it’s in a space like predominantly Pākehā, Western, white spaces, if that whakamā is there, I won’t feel safe to even try and instead I just try and push back or I select spaces that I go to that I know I will feel more comfortable.”

But when Funaki and her colleagues addressed a workshop about how more professors could be Māori and Pasifika, she realised it was important to share stories for change.

Changing the dynamic
Funaki says it is about claiming spaces and changing the dynamic so that she comes from a perspective of pushing for change and not delivering trauma on a silver platter for others to consume.

Funaki keeps advocating for her people, driven by her heritage, both from the Pacific and Aotearoa.

“I can’t just be quiet and complacent. I can’t not say anything or call anything out when injustice is happening, like I feel the need to even more speak up because of my ancestors. When you know you have Pasifika descent in your family who migrated over for the idea of wanting better, or the land of milk and honey.

“You feel this obligation to give back and to do something with that sacrifice they have given. So having this Tongan inside of me and knowing that even though I’m not immersed fully in the Tongan culture, I still feel proud that that’s in my blood.”

Funaki says her Māori heritage and the struggles in institutions like universities, gave her even more motivation.

But still, it could be physically, mentally and spiritually tiring. Funaki said it was her pride in who she was that maintained her.

“That ancestral link, that blood that we have. What our people did to even get here. That’s not by chance or accident. That was navigation, that was intelligence. That’s science. Our people are smart and always have been, for generations. So I’m proud to be Māori and Tongan.”

Proud of his mixed heritage
Haereiti Hetet is someone else who is proud of his mixed heritage. The Fijian rugby international represented his mother’s whakapapa, from Ngāti Maniapoto and Ngāti Tuwharetoa, when he turned out for the Māori All Blacks in 2019, ironically against Fiji. He said being involved in that team made him want to learn more of the Māori language. 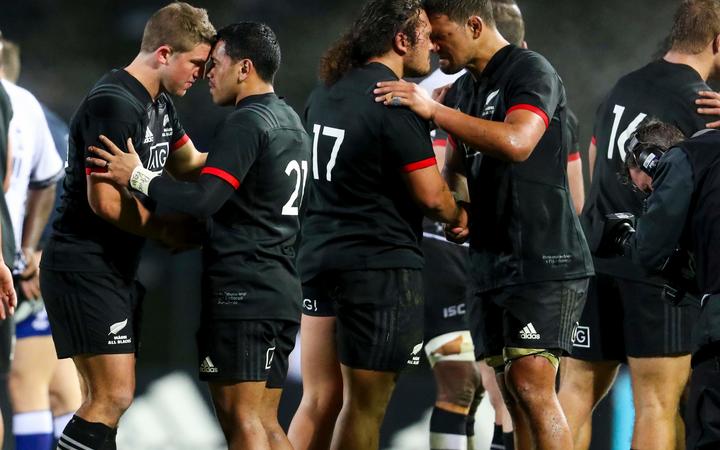 Haereiti Hetet, 17, represented the Maori All Blacks against Fiji in 2019 … rugby allowed greater access to both his cultures. Image: RNZ/PHOTOSPORT

Although born and bred in Otorohanga, and surrounded mostly by his Māori whānau, Hetet said rugby had allowed greater access to both his cultures. When it came to his time with the Flying Fijians in 2020 and the Māori All Blacks the year before, both teams took time and made space to acknowledge their wairua, whether it be Fijian prayers and hymns sung multiple times during the day, or karakia and waiata with the Māori team.

However, it was challenging trying to connect and learn two cultures and languages in the course of what has become a busy life.

“Throughout the day, you run out of time, you go to work, I’m still trying to train regularly to stay in good condition, just in case somebody comes up. I also have a small family as well, so it’s just finding a balance.”

Hetet says he is trying to find an hour, or a half an hour to keep his learning going. He hopes one day to get to his father’s [former Fijian international Joe Veitayaki] island of Matuku to take his cultural journey to the next level, but in the meantime he will continue to connect via his marae and community in Aotearoa.

And as Aotearoa marked another Waitangi Day, he believes it is a good opportunity for Māori to have their voice heard as they continue to fight for land and rights as tangata whenua.

“To me it’s like this constant reminder of, let’s pretend we have this romanticised lens of a bicultural partnership and then let’s even claim multiculturalism, because we are a multi-ethnic nation and it’s like this time to celebrate and put on these pretty window dressings for another year.”

But Funaki says it is lies. 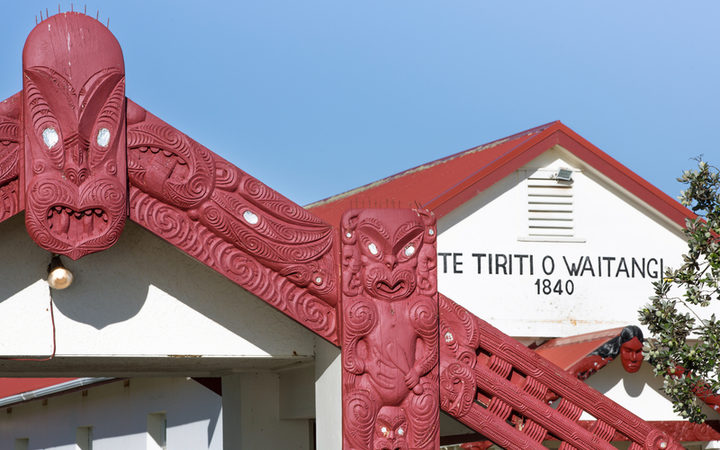 Lourdes Vano understands that hurt. For her, the day is an opportunity for education and information.

“If you don’t know what to do on Waitangi Day and you’re scared of contributing to something that you don’t know completely about, use it as a day for education. Ranginui Walker’s Struggle Without End is a really good starter book about Māori history and New Zealand/Aotearoa and really sets the scene and gives so much context for Waitangi Day.”

Vano says people could also use it as a day to find out how they could support tangata whenua.

They sound like words from this growing Generation B – so named by ‘Aupito William Sio – Brown, Brainy, Beautiful, Bicultural, Bilingual and Bold.

This article is republished under a community partnership agreement with RNZ.