Gabe Vasquez first visited New Mexico when he was 8 years old, during a fishing trip to the Rio Grande with his father and older brother. They traveled from their home just south of the border in Ciudad Juárez and planned to camp in state parks along the river. Even now, Vasquez recalls the air of excitement in the car as he and his brother fought over who would get the Superman fishing rod and who would get Spiderman, both purchased for the occasion. (He wound up with Supe.) They had tossed their lines into the water once or twice when a game warden arrived and asked to see their fishing licenses. They didn’t know they needed such a thing, a point the elder Vasquez could not convey because he didn’t speak English and the officer did not speak Spanish.

It wasn’t long before Border Patrol agents arrived and took everyone into town. Vasquez remembers feeling embarrassed and traumatized sitting on a bench with his brother while his father was detained in a county jail cell. The authorities cited his father for fishing without a license and let him go a few hours later. Vasquez figured they’d pack up their stuff and head home, but his father was adamant that they continue with the trip. “El Río Bravo es nuestro río,” he told his sons defiantly. “And no one is going to take it away from us.”

“The Rio Grande is our river” doesn’t signify ownership of the land and its natural features, but rather the idea that everyone deserves unfettered access to it. This should be a given, yet outdoor spaces are not always safe or welcoming to all. Just last year, an infamous incident involving Black birdwatcher Christian Cooper in Central Park exposed the kind of racism and intimidation people of color still experience in outdoor spaces. The prevailing narrative that outdoor recreation is only for those with a certain skin color, body type, and tax bracket prevents many from exploring the great outdoors at all — by one 2014 estimate, only 1 percent of National Park visitors were Black and 2 percent were Native American. And those few who do venture forth often feel they don’t belong once they arrive.

The question of who feels ownership of public lands has profound implications for climate action and justice. “If there were any sort of respect for the ostensibly communal nature of public lands,” Grist’s Eve Andrews recently noted, “no one would feel entitled to their destruction, nor barred from their enjoyment.” Generations of activists have fought for greater inclusion and representation in the outdoors, and a growing number of policymakers are joining them. Senator Martin Heinrich of New Mexico plans to introduce legislation supporting the Outdoor Fund for Underrepresented Tribal, Urban, and Rural Equity. The initiative, led by Vasquez and others, would secure federal funding to improve access to natural spaces for underserved youth nationwide to ensure that, as Heinrich put it, “we are supporting the next generation of stewards of our air, land, water, and wildlife.”

The coalition, with the clever acronym Outdoor F.U.T.U.R.E., is made up of Black, Indigenous, and other people of color who run outdoor-equity organizations across the country. “We’re often the one or two people of color that are asked to be a part of green group discussions,” Angelou Ezeilo, one of the minds behind Outdoor F.U.T.U.R.E., says of the initiative’s leadership. It was inspired by the success of the New Mexico Outdoor Equity Fund, a state program launched in 2019 and championed by Vasquez’s organization, Nuestra Tierra Conservation Project. The fund awards grants of as much as $15,000 to nonprofits, local and tribal governments, and others that provide educational outdoor experiences to underserved or low-income youth statewide. It received 84 applications for 25 grants in its first year, underscoring just how sorely such programs are needed. That demand prompted Vasquez and his colleagues to expand their campaign to the national level with Outdoor F.U.T.U.R.E.

(About that name: Beyond nodding toward the goal of encouraging the outdoor enthusiasts and conservationists of tomorrow, it’s just good politics. “Like any legislation in Congress, the better acronym you have, the more people pay attention to it,” Vasquez says. “So we’re pretty proud of that.”)

Spending time outdoors provides essential lessons about how we relate to the natural world, how we depend upon it for our health and welfare, and the responsibility we all share for protecting it. Many of the leaders working so hard to make that opportunity available to everyone attribute their passion for conservation and advocacy to their own childhood experiences with nature.

Long before she founded the Greening Youth Foundation, Ezeilo spent the summers of her childhood exploring 54 acres of woodland in upstate New York, where her family owned a second home. It was there, far from the busy, mazelike confines of Jersey City, New Jersey, that she felt truly free. “I can almost smell what the house smelled like,” Ezeilo says, recalling the musty scent of the place after having been shuttered all winter. Upon arrival, her family would have to usher bats out of the bedrooms upstairs. She and her siblings blissfully spent the summers playing, picking berries for pancakes, and hiking through the hills — looking, as she puts it, something like a “Black Von Trapp family.”

Angelou Ezeilo (front, in the red shirt) with her family in the 1970s at their property in upstate New York. Courtesy of Greening Youth Foundation

“I really remember feeling that there was something magical that happened in those woods, on that land,” Ezeilo says.

That is a common feeling among those who spend any amount of time outdoors. Learning and playing outside fosters creativity and imagination in kids, and promotes happiness and a sense of connectedness. It’s not for nothing that Aristotle noted, “In all things of nature there is something of the marvelous.”

Back at her family’s brownstone in New Jersey, Ezeilo stayed connected to nature tending her grandmother’s 4-by-6-foot garden. She took care of tasks like harvesting seeds from sunflowers, eagerly getting her hands dirty in the small plot of earth. “When I’m looking back at my career and why I do the things that I do now,” Ezeilo says, “I know it has a lot to do with that special relationship that happened at a very young age.”

Still, because of her dark skin, Ezeilo didn’t initially see a career path in conservation, or even a place in the recreational outdoor scene. When she first learned about the climate crisis, during a screening of Al Gore’s An Inconvenient Truth, the issue didn’t feel at all personal despite her love of nature. “Although I believed it, it didn’t resonate with me because there were no people who looked like me talking about the issue,” she says. It wasn’t until law school that she started learning more about the role she could play in addressing environmental inequities.

This is why affinity spaces — groups that are intentionally inclusive of a particular identity or interest — are so important. José González, another member of the Outdoor F.U.T.U.R.E. leadership team and Vasquez’s fellow Grist 50 Fixer, knows this well. As the founder of Latino Outdoors, he has often had to field the question, “Well, why is there no White Outdoors?” His response: “There is a white outdoors. You’re in it.” The point being that people who identify with the societal norm — white, straight, able-bodied, you get the point — never have to consider the fact they belong to a group at all.

It’s impossible to talk about public lands without recognizing that much, if not all, of the supposedly uninhabited land we’ve set aside as state and federal parks was stolen from Native peoples — land many are fighting to reclaim. Compounding that crime, national parks were, by law, exclusively for white citizens until 1945. “That’s not ancient history,” González says. “That lives within the community memory, and it can exist as generational trauma. We need to be able to address that through a healing process — and policy needs to support it, so that we’re not just leaving it to pure good will and intention.”

That is precisely what Outdoor F.U.T.U.R.E. aims to do: enact federal legislation to give more young people access to the healing, inspirational experiences nature offers. Spending time among plants and dirt and critters has been shown to reduce stress, anger, blood pressure, muscle tension, and just generally make us feel better. Reflecting on his early experience in nature, González relates to the magic and freedom Ezeilo remembers from her childhood. The first time he saw redwoods and giant sequoias in California’s parks, González felt like he was walking through a magical realism novel. “I was wrestling with the sense that these trees are real, but they seem magical,” he says. He likens the experience to walking with his ancestors.

Creating space for these types of healing experiences has a direct correlation with climate action, González says. If more people view nature as a source of solace and nourishment, more people champion its preservation. Studies have even shown that kids who play outside are more likely to care about, and advocate for, the natural environment as adults. “We want people caring about nature,” González says, “because nature can then care about us.” 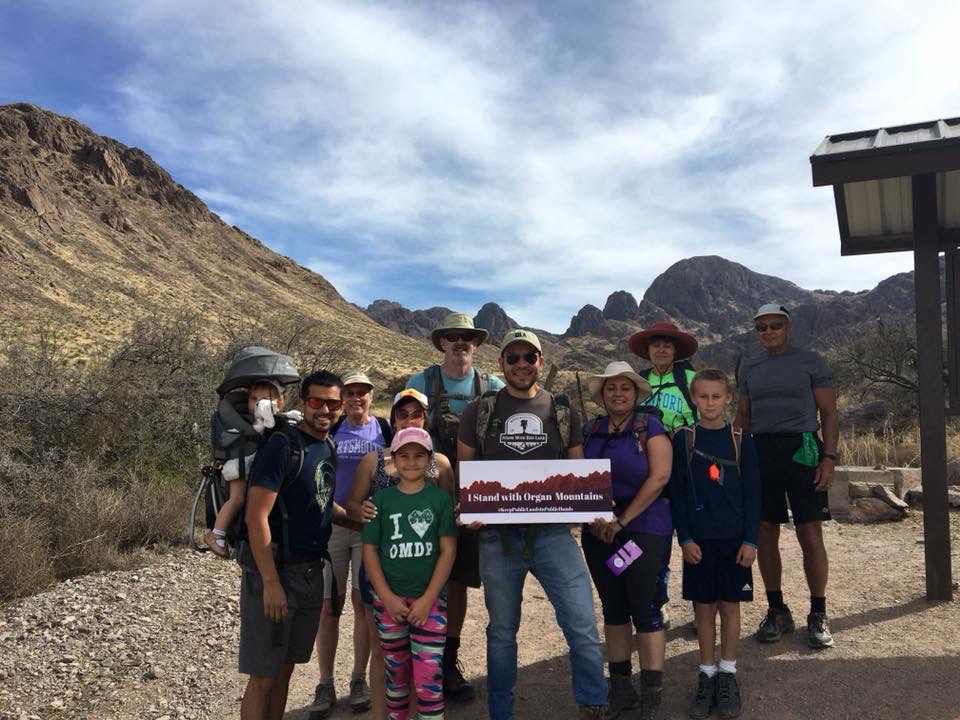 Vasquez now sits on the city council of Las Cruces, New Mexico, not far from the site of that childhood fishing trip. He named his nonprofit Nuestra Tierra in part as an homage to his father’s declaration that the Rio Grande belongs to us all. The organization’s work created the map for the New Mexico Outdoor Equity Fund, and, ultimately, Outdoor F.U.T.U.R.E.

“I think everyone should be able to enjoy these spaces in order to learn to love them and to care for them in the future,” Vasquez says. “The more underserved youth we get outside, the more young people that we get to care for for our climate and our environment, and also to reap the benefits of being outdoors.” Vasquez also points to the power of outdoor recreation to reconnect us with our fundamental human nature. Outside, our needs are simple: food, water, shelter. Our entertainment is the sights and sounds around us. Our mandate is to leave no trace.

Those, too, are lessons he learned from his father that day when he left the county jail, determined to introduce his boys to the beauty of nuestro río. After buying fishing licenses at the nearest bait shop, the three of them returned to their campsite, cast their lines into the turbid waters of the Rio Grande, and spent the night catching catfish, yellow perch, and bluegill. Vasquez looks back on the experience as an awakening to the healing power of the great outdoors. He will never forget his father’s lesson that everyone belongs in nature, and nature belongs to everyone.