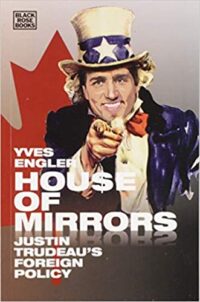 Brand a few neo-Nazis in Canada as “terrorists” but train and give military assistance to a much larger and more violent group of them in the Ukraine. What’s going on?

The New Democratic Party’s successful push to list the Proud Boys as a terrorist organization highlights their indifference to imperialism and a decidedly ‘North Americanist’ worldview. A tool of US-led global domination, Canada’s terrorist list should be abolished not have names added to it.

One indication that the push to list the Proud Boys was “North Americanist” posturing is revealed by the NDP’s indifference to the best organized neo-Nazis in the world. A political party serious about listing white supremacist organizations would include right wing groups in the Ukraine that helped bring down the government in 2014. But Ottawa – with NDP backing – has supported those forces as opponents of Russia. Using the Nazi “Wolfsangel” symbol and praising officials who helped slaughter Jews and Poles during World War II, the Azov Battalion is a prime example. In 2018 Canada’s military attaché in Kiev met Azov representatives, Canada finances a police force aligned with them and our military is probably training them.

While none of the more influential Ukrainian neo-Nazi groups are on the list, the far-right Russian Imperial Movement was one of the 13 groups recently added. But, that group is viewed as a geopolitical competitor since it helped pro-Russian separatists in the war in eastern Ukraine.

Another violent, racist group that could be listed, but isn’t because it serves the US Empire, is Venezuela’s Voluntad Popular (VP). The Proud Boys role in the January 6 siege of Capitol Hill – what prompted NDP leader Jagmeet Singh to call for their designation as a terrorist organization – is no worse than VP’s violent coup efforts. In January 2014 VP leader Leopoldo López launched La Salida (exit/departure) in a bid to oust Nicolas Maduro who had just won a presidential election even the Stephen Harper government accepted. VP activists formed the shock troops of “guarimbas” protests that left 43 Venezuelans dead, 800 hurt and a great deal of property damaged. Dozens more were killed in a new wave of VP-backed protests in 2017, including Orlando Jose Figuera who “was burned alive on May 20 in Caracas’ Altamira neighborhood, one of the capital’s affluent areas, after opposition protesters suspected that the 21-year-old Black man was a government supporter.”

The Mujahedin-e-Khalq (MEK) is another group that demonstrates the imperial politics driving terrorist designations. It was removed from the terror list in 2012 prompting the Globe and Mail to note: “Changes to Canada’s terror list a shot across Iran’s bow”. At the same time the Harper government added the Islamic Revolutionary Guard Corps’ Qods Force, an offshoot of Iran’s military. The MEK was removed because it was working with Mossad and the CIA to assassinate Iranian scientists and others. (Under different legislation Iran was also designated a “state sponsor” of terrorism alongside Syria.)

Twelve per cent of the list is from a long-occupied land with one tenth of one per cent  of the world’s population. Representing much of Palestinian political life, eight of the oppressed nation’s organizations are listed, ranging from the left secular Popular Front for the Liberation of Palestine to the elected Hamas ‘government’ in Gaza.

A dozen years after the terror list was established the first ever Canadian-based group was added. In 2014 the International Relief Fund for the Afflicted and Needy (IRFAN) was designated a terrorist organization for engaging in the ghastly act of supporting orphans and a hospital in the Gaza Strip through official (Hamas-controlled) channels.

Compared to the Israeli military, Hamas looks like a Quaker social justice club. But the NDP is not pushing to remove Palestinian organizations from the list. Nor is it calling for the Israeli military to be added. In fact, no NDP MP has yet been willing to publicly say Canada should uphold its own laws and stop illegal recruitment for the Israel Defence Force in Canada!

Two other groups on the terror list are leftist Colombian guerilla groups Ejército de Liberación Nacional and Fuerzas Armadas Revolucionarias de Colombia. But not listed is the far more violent US-backed Colombian military, which has long operated “death squad tactics”. Between 2002 and 2008 the Colombian military murdered more than 10,000 civilians so commanders could bolster their tallies of ‘enemies’ killed in combat. With the FARC disarming as part of a 2017 peace accord the number of indigenous and social movement leaders killed in Colombia has risen to shocking levels.

The dynamic is not dissimilar with a major Turkish group listed. Canada considers the Kurdistan Workers’ Party (PKK) a terrorist organization, but not the military of our NATO ally. Through the 1990s and early 2000s the PKK fought a bloody campaign for autonomy. But the bulk of the violence was meted out against Kurdish civilians by the US-armed Turkish military.

Even some of the more violent and reactionary groups on the list have legitimacy. The Taliban governed Afghanistan until the US, Canada and others invaded. Twenty years later they still control much of the country.

Al-Shabab was also part of a short-lived government in Somalia. In 2006, 50,000 Ethiopian troops invaded Somalia, which saw about 6,000 civilians killed and 300,000 flee the country. Washington prodded Addis Ababa into intervening and the US literally fuelled the invasion, providing gasoline, arms and strategic guidance as well as launching air attacks. The invasion/occupation led to the growth of al-Shabab, which waged a violent campaign against the foreign forces in the country and Somalia’s transitional government. Al-Shabab grew from being the relatively small youth wing of the Islamic Courts Union to the leading oppositional force in the country. It also radicalized and turned them from being a national organization towards increasing ties to Al Qaeda.

Al Qaeda and ISIS affiliates represent a number of the groups on the terrorism list. But, as distasteful as they may be, their listing also highlights a double standard. Al Qaeda and ISIS are responsible for a fraction of the US military’s terror. Rather than list the Marines, Canada has hundreds of accords with the US military and Canadian generals regularly lead US troops (in Iraq after the 2003 invasion, Haiti after the 2010 earthquake, etc.).

Beyond consisting almost entirely of organizations viewed as challenging US hegemony, Canada’s terrorism list itself reflects imperial dynamics. These lists offer powerful nations an added instrument to exclude and punish. For this reason, the world’s leading bully has copious terrorist legislation. While the US has various forms of terrorist designations, the UN and many countries in the Global South do not. Haitian officials understand full well that as much as many people there may want the Marines or CIA listed as ‘terrorists’ they are simply not in a position to do so.

The NDP leadership is indifferent to the imperial implications of Canada’s terrorism list. They pushed to list the Proud Boys because it garnered them headlines amidst widespread legitimate dislike of Donald Trump. But it is not progressive to reinforce a fundamentally racist US-led imperial system.

The post What is Canada’s NDP Thinking? first appeared on Dissident Voice.