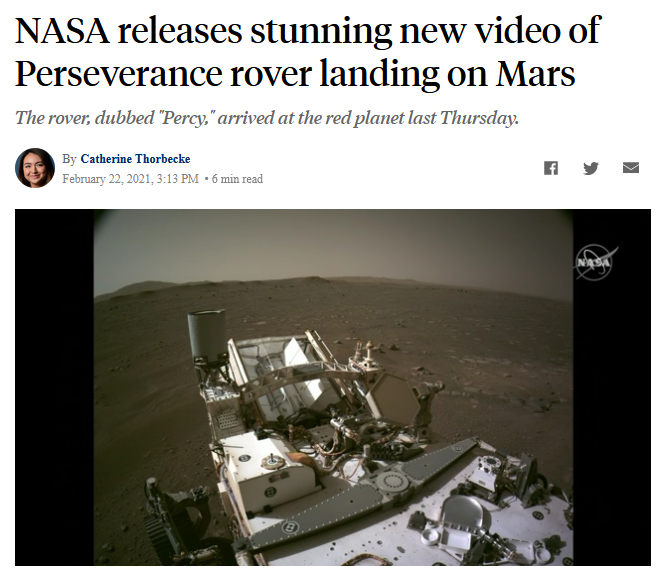 ABC (2/22/21) had one of many reports that celebrated the Mars landing without noting that the rover was powered by plutonium—or the risks NASA had taken in launching that payload into space.

With all the media hoopla last week about the Perseverance rover, frequently unreported was that its energy source is plutonium—considered the most lethal of all radioactive substances—and nowhere in media was the NASA projection that there were 1-in-960 odds of an accidental release of the plutonium on the mission.

“A ‘1-in-960 chance’ of a deadly plutonium release is a real concern,” says Bruce Gagnon, coordinator of the Global Network Against Weapons and Nuclear Power in Space.

Further, NASA’s Supplementary Environmental Impact Statement (SEIS) for the $3.7 billion mission acknowledges that solar energy could have been an “alternative” power source for Perseverance. Photovoltaic panels have been the power source for a succession of Mars rovers.

One in 100 rockets undergo major malfunctions on launch, mostly by blowing up. NASA in its SEIS (viewable online) described the potential impact of an accidental release of plutonium during Perseverance’s July 30, 2020, launch on the area around Cape Canaveral under the heading “Impacts of Radiological Releases on the Environment:

In addition to the potential human health consequences of launch accidents that could result in a release of plutonium dioxide, environmental impacts could also include contamination of natural vegetation, wetlands, agricultural land, cultural, archaeological and historic sites, urban areas, inland water and the ocean, as well as impacts on wildlife.

In addition to the potential direct costs of radiological surveys, monitoring and potential cleanup following an accident, there are potential secondary societal costs associated with the decontamination and mitigation activities due to launch area accidents. Those costs may include: temporary or longer term relocation of residents; temporary or longer term loss of employment; destruction or quarantine of agricultural products, including citrus crops; land use restrictions; restrictions or bans on commercial fishing; and public health effects and medical care.

NASA was compelled to disclose the estimated odds of an accident, consequences of a plutonium release and alternatives to using nuclear power under the National Environmental Policy Act.

Meanwhile, the US is now producing large amounts of plutonium-238, the plutonium isotope used for space missions. The US stopped producing plutonium-238 in 1988 and began obtaining it from Russia, a trade that was halted in recent years. A series of NASA space shots using plutonium-238 are planned for coming years.

Plutonium-238 is 280 times more radioactive than plutonium-239, the isotope used in atomic bombs and as a “trigger” in hydrogen bombs. There are 10.6 pounds of plutonium-238 on Perseverance.

We dodged a plutonium bullet on the Perseverance mission. The Atlas V rocket carrying it was launched without blowing up. And the rocket didn’t fall back from orbit, with Perseverance disintegrating on re-entry into the Earth’s atmosphere and dispersing its plutonium.

But with NASA planning more space missions involving nuclear power, including developing nuclear-powered rockets for trips to Mars and launching rockets carrying nuclear reactors for placement on the Moon and Mars, space-based nuclear Russian roulette is at hand.

The acknowledgement that “an accident resulting in the release of plutonium dioxide from the MMRTG [Multi-Mission Radioisotope Thermoelectric Generator] occurs with a probability of 1 in 960” is made repeatedly in the SEIS.

The amount of electricity produced by Perseverance’s plutonium generator is minuscule—some 100 watts, similar to a light bulb. 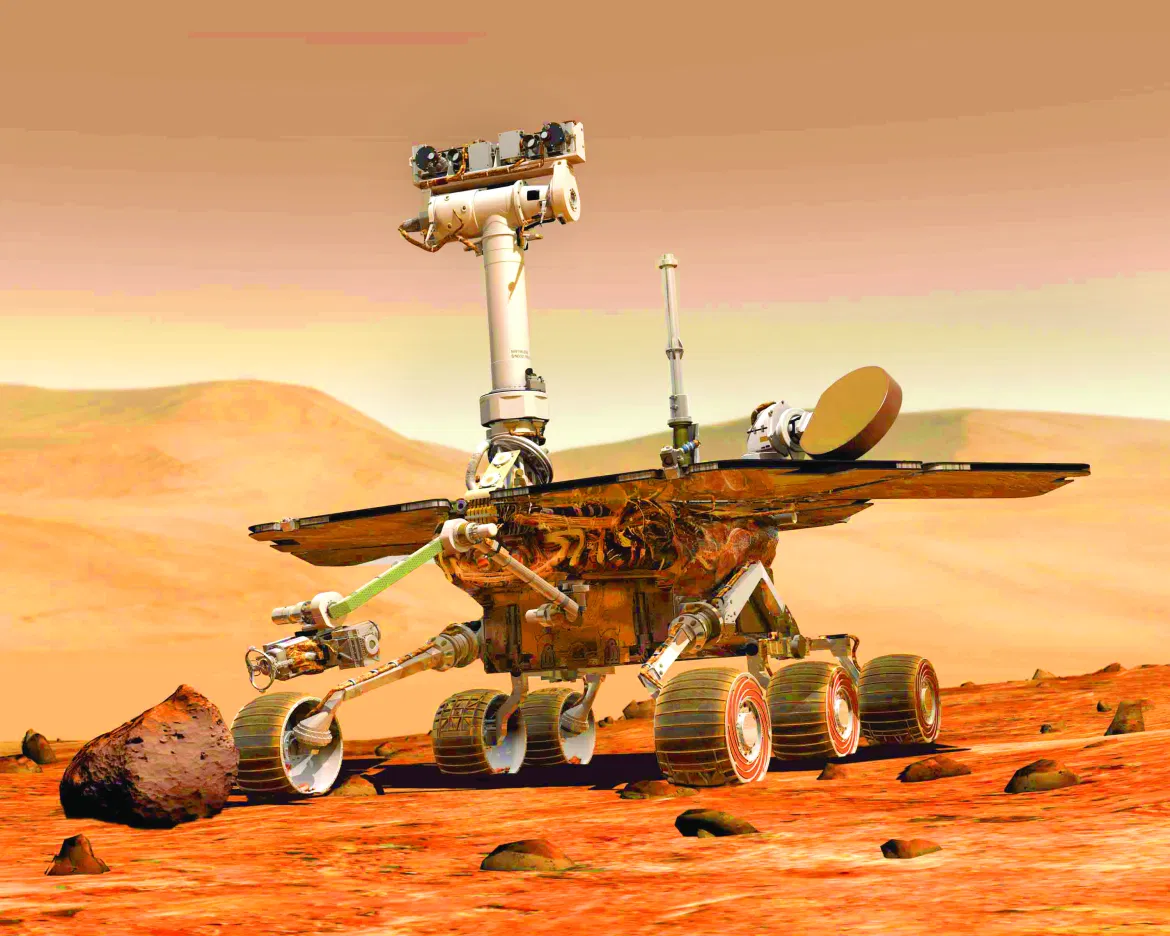 A solar alternative to the use of plutonium on the mission is addressed at the start of the SEIS, in a “Description and Comparison of Alternatives” section. First is “Alternative 1,” the option adopted, using a plutonium-fueled generator “to continually provide heat and electric power to the rover’s battery so that the rover could operate and conduct scientific work on the planet’s surface.”

That is followed by “Alternative 2,” which states:

Under this alternative, NASA would discontinue preparations for the Proposed Action (Alternative 1) and implement a different power system for the Mars rover. The rover would use solar power to operate instead of a MMRTG.

The worst US accident involving the use of nuclear power in space came in 1964, when the US satellite Transit 5BN-3, powered by a SNAP-9A plutonium-fueled radioisotope thermoelectric generator, failed to achieve orbit and fell from the sky. It broke apart as it burned up in the atmosphere. “A worldwide soil sampling program carried out in 1970 showed SNAP 9-A debris to be present at all continents and all latitudes,” according to a 1990 report by the Organization for Economic Cooperation and Development and the Swedish National Institute for Radiation Protection; the level of  plutonium-238 in the Earth’s environment tripled (LA Times, 7/25/88).

After the SNAP-9A (SNAP for Systems Nuclear Auxiliary Power) accident, NASA became a pioneer in developing solar photovoltaic power. All US satellites now are energized by solar power, as is the International Space Station.

The worst accident involving nuclear power in space in the Soviet/Russian space program occurred in 1978, when the Cosmos 954 satellite with a nuclear reactor aboard fell from orbit and spread radioactive debris over a 373-mile swath from Great Slave Lake to Baker Lake in Canada. There were 110 pounds of highly enriched uranium fuel aboard.

I first began writing widely about the use of nuclear power in space 35 years ago, when I broke the story in The Nation magazine (2/22/86) about how the next mission of the ill-fated Challenger space shuttle, which blew up on January 28, 1986, was to loft the Ulysses space probe, designed to orbit around the Sun, which was fueled with 24.2 pounds of plutonium-238.

If the Challenger had blown up on that mission, scheduled for May 1986, and released Ulysses’ plutonium, it would not have been six astronauts and teacher-in-space Christa McAuliffe dying, but many more people.

Pursuing the issue, I authored the books The Wrong Stuff: The Space Program’s Nuclear Threat to Our Planet and Weapons in Space. I wrote and presented the TV documentary Nukes in Space: The Nuclearization and Weaponization of the Heavens and other TV programs. And I have written many hundreds of articles.

The absence in media reporting on the nuclear dangers of the Perseverance Mars rover is not new. In The Wrong Stuff, I include a section on “The Space Con Job.”

I quote extensively from an article published in the Columbia Journalism Review (7–8/86) after the Challenger accident by William Boot, the magazine’s former editor, headlined “NASA and the Spellbound Press.” He wrote:

He found “gullibility” in the press. “The press,” he wrote, has been “infatuated by man-in-space adventures,” and “US journalists have long had a love affair with the space program”:

Many space reporters appeared to regard themselves as participants, along with NASA, in a great cosmic quest. Transcripts of NASA press conferences reveal that it was not unusual for reporters to use the first person plural. (‘When are we going to launch?)

In The Wrong Stuff, I also wrote about an address on “Science and the Media” by New York Times space reporter John Noble Wilford in 1990 at Brookhaven National Laboratory. Wilford declared: “I am particularly intrigued by science and scientists…. My favorite subject is planetary science.” After his talk, I interviewed him, and he acknowledged that “there’s still a lot of space reporters who are groupies.” Still, he went on, “Some of the things that NASA does are so great, so marvelous, so it’s easy to forget to be critical.”

On NBC’s Today show (2/18/21), the attitude of the reporters on the morning of the Perseverance landing  was as celebratory as the label of the video aired: “Jubilation at NASA Control.” Never was there a mention of nuclear power or plutonium, or the acknowledged risks of an accidental dispersal.

I am disheartened that the media shows little inclination to mention the words “plutonium” or “probabilities of accidental release” in their so-called reporting of the Mars rover arrival. You have to question who they work for.

We daily hear the excited anticipation of the nuclear industry as stories reveal the growing plans for hosts of launches of nuclear devices—more rovers on Mars, mining colonies on the moon, even nuclear reactors to power rockets bound for Mars. The nuclear industry is rolling the dice while people on Earth have their fingers crossed in the hope technology does not fail—as it often does.

Gagnon’s Maine-based international organization has been challenging the use of nuclear power and the deployment of weapons in space since its formation in 1992. The US has favored nuclear power as an energy source for space-based weapons (LA Times, 7/25/88). He added:

The media, while ignoring the Mars rover plutonium story, are also guilty of not reporting about the years of toxic contamination at the Department of Energy nuclear labs where these space nuclear devices are produced. The Idaho Nuclear Laboratory and Los Alamos Nuclear lab in New Mexico have long track records of worker and environmental contamination during this dirty space nuke fabrication process.

The public will need to do more than cross our fingers in hopes that nothing goes wrong. We need to speak out loudly so Congress, NASA and the DoE hear that we do not support the nuclearization of the heavens. Go solar or better yet—stay home and use our tax dollars to take care of the legions of people without jobs, healthcare, food or heat.  Mars can wait.