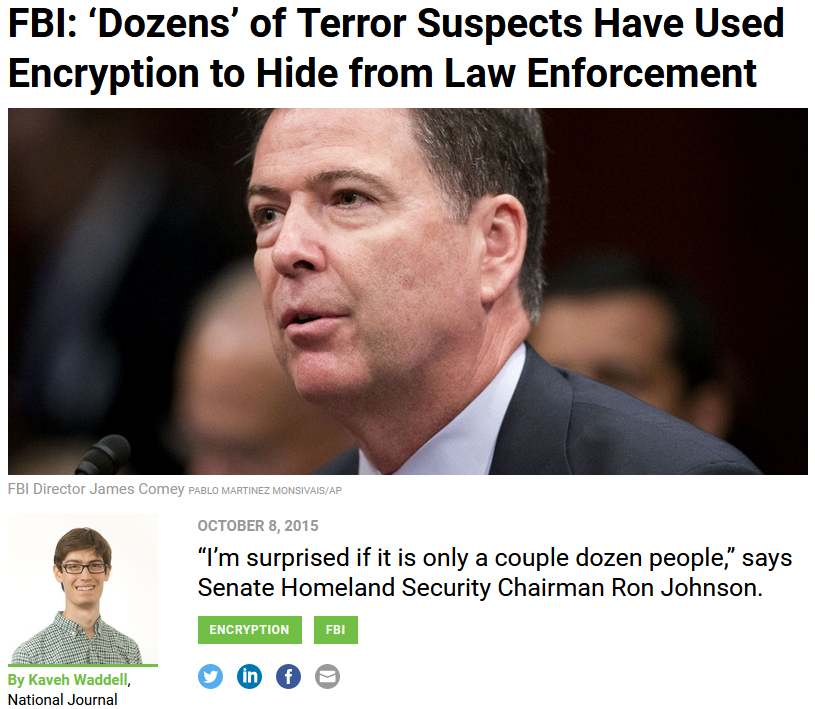 FBI Director James Comey (Nextgov, 10/8/15) told Congress that his agency lost track of “dozens” of terror suspects because of encryption. “We’re really not just mak­ing this up,” he assured senators.

Before he became a household name as the accused spoiler of the 2016 election, James Comey, FBI director under President Barack Obama, was already well-known in tech circles as a crusader against strong encryption. Still smarting from Edward Snowden’s exposure of the US government’s massive and illegal domestic spying operations, Comey grabbed any microphone he could during the waning years of Obama’s tenure to warn Americans that encryption technology was putting us all at grave risk by causing law enforcement to “go dark.”

Cryptography is the art of encoding text or other data such that only those who have the secret key can read it. This data can include anything from messages and records to digital currency—but these days encryption most commonly protects account passwords and other sensitive information as it traverses the internet.

Encryption has been around for millennia and, in modern times, it is used on a daily basis by nearly every person living in a technologized society. But like any technology, it can frighten those in power when wielded by the relatively powerless. In the summer of 2015, Comey told the Senate Judiciary Committee that encryption had suddenly inspired the FBI “to consider how criminals and terrorists might use advances in technology to their advantage.”

Sensitive to the public’s lingering outrage at the Snowden revelations, Comey turned to the usual parade of horribles in his attempts to convince Congress that encryption isn’t all it’s cracked up to be: “Malicious actors can take advantage of the internet to covertly plot violent robberies, murders and kidnappings,” he warned. “Sex offenders can establish virtual communities to buy, sell and encourage the creation of new depictions of horrific sexual abuse of children.”

Comey preferred to use “horrific sexual abuse of children” and the specter of terrorism to disparage encryption technology—recall the showdown between the FBI and Apple after the perpetrators of a late-2015 massacre in San Bernardino left behind an encrypted iPhone. But the ACLU (4/1/16) quickly exposed his fraud: Researchers uncovered 63 court orders for access to encrypted devices and reported, “To the extent we know about the underlying facts, these cases predominantly arise out of investigations into drug crimes”—rather than terrorists and pedophiles.

In the wake of the January 6 mob attack on the US Capitol Building, this pattern is repeating itself again…only now corporate media are taking up the FBI’s mantle on their own behalf. 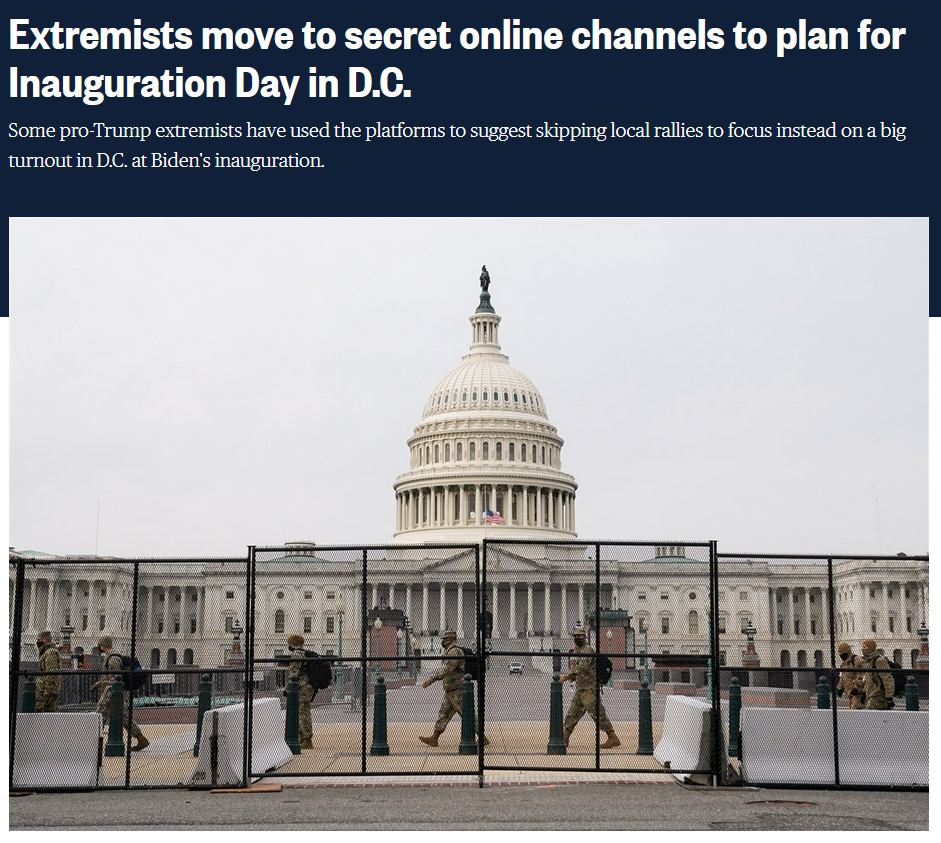 NBC (1/12/21) warned that “right-wing extremists are using channels on the encrypted communication app Telegram to call for violence against government officials on January 20.”

Following the violence in DC, headlines across corporate media declared: “Far Right Turns to Encrypted Platforms to Stoke Further Unrest” (Financial Times, 1/14/21). This mass “relocation” online led corporate outlets to speculate that political extremists were planning something huge. NBC News (1/12/21) cherry-picked posts on the encrypted messaging app Telegram to foment fears of “a big turnout in Washington at Biden’s inauguration on January 20.” Politico (1/12/21) and the Washington Post (1/14/21) similarly linked the use of encryption to imminent violence. Despite weeks of breathless anticipation, that violence never materialized.

Like Comey, corporate media have resorted to guilt by association to turn their readers against digital security. According to Vice (4/17/19), encrypted messaging apps and e-mail systems are chock-full of the worst people in the world, like “ISIS members,” “neo-Nazi extremist groups” and at least one “paramilitary organization.” Now we can add angry white men in furs to the list.

More recently, Forbes (1/13/21) introduced its readers to the creators of Signal and Telegram (among the most popular encrypted messaging platforms) who belong to another infamous class: billionaires. Never mind that Forbes normally counts billionaires among the world’s most important people. To cement reader acrimony, they made sure to mention that Telegram’s founder is Russian.

What preoccupied corporate media more than the possibility of violence in the near term, however, were the long-term implications for law enforcement. The Washington Post lamented, in multiple articles (1/17/21, 1/18/21), that the feds have “lost a valuable resource to monitor the growing threat.” Fortune (1/13/21) similarly complained that “encryption makes it difficult for law enforcement to monitor users.” The message is clear: Far-right extremists are coming to a town near you and, thanks to evil billionaire-funded technology, the police are helpless to do anything about it.

Corporate media’s argument that encryption creates crime and that cops need exceptional access to stop it is as outmoded as it is simplistic. Their premise and conclusion are just as false now as they were when Comey staged his anti-encryption tour five years ago.

In fact, news media’s resurgent obsession with encryption is just the latest episode in a decades-long effort to undermine user security in favor of domestic surveillance, with each iteration colored by the threat du jour. But instead of educating readers on the history of this conflict and the lessons learned, most corporate media seem to have forgotten all about it. 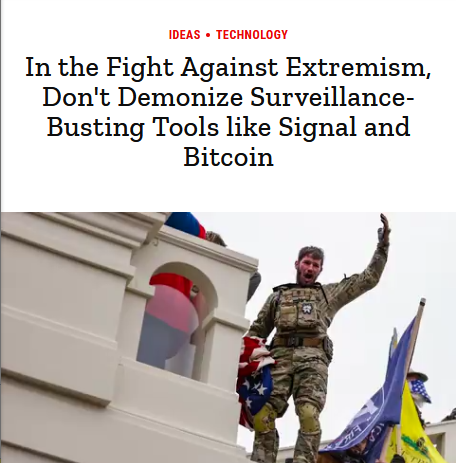 As Alex Gladstein recalled for Time (1/26/21), this debate originated in the 1990s with the dawn of internet communication and the US government’s original complaints about “going dark.” To solve that pseudo-problem, the National Security Agency developed the Clipper Chip, a piece of hardware that, when installed in consumer products, would give law enforcement exceptional access to otherwise unreadable data.

The Clipper Chip met fierce resistance from consumer advocates and was panned by scholars, who concluded that this kind of technology would “require significant sacrifices in security and convenience, and substantially increased costs to all users of encryption,” that “the breathtaking scale and complexity” of such a system was “beyond the experience and current competency of the field,” and for these reasons “may well introduce ultimately unacceptable risks and costs.” After securing only one major adopter—its own Department of Justice—the US government abandoned the project.

As Comey ramped up his crusade against encryption in 2015, the same scholars got together again to reassess these so-called “crypto wars.” They found that “today, the fundamental technical importance of strong cryptography and the difficulties inherent in limiting its use to meet law enforcement purposes remain the same.” And although Comey sought to convey the sense that a “going dark” phenomenon was just emerging, “the arguments are the same as two decades ago,” they concluded.

Here we arrive at the present day, with corporate media peddling a new bogeyman in service of the same bogus arguments. Forbes (2/1/21) declared that “tech companies are going to have to decide whether they hate right-wing extremists more than they love privacy and freedom from government snooping.” “The problem is these apps are hamstrung by their absolutist posture,” Mark MacCarthy wrote, suggesting a middle-ground approach that wasn’t feasible in 1993 and is even less feasible today.

While there are myriad problems with giving cops exceptional access to encrypted systems, the overarching issue is that technical vulnerabilities are morally agnostic—it doesn’t make any difference if the person taking advantage of the exploit is an FBI agent or a malevolent hacker.

As the experts cited above wrote, “This is a trade-off space in which law enforcement cannot be guaranteed access without creating serious risk that criminal intruders will gain the same access.”  Not just messaging apps, but all internet-based activity is put at risk by creating backdoors to encryption.

At the end of the day, Snowden demonstrated that there is no “going dark” phenomenon—we live in a golden age of surveillance, in which the US government and tech corporations have ready access to more data about their targets than at any point in history.

Moreover, all of corporate media’s bellyaching about political extremists and encryption occurred after the riot was announced online, endorsed on nationwide radio, permitted by the National Park Service, and organized in plain sight on Facebook. Why, then, are corporate media again suggesting that we cripple the most important technology on the internet when law enforcement can’t even prevent violence planned out in the open?

Shoshana Zuboff (New York Times, 1/29/21): “The United States and many other liberal democracies chose surveillance over democracy as the guiding principle of social order.”

The answer is that there is a facile tendency to blame technology (encryption) for social-political problems, while at the same time heralding technology (surveillance) as a silver bullet against those problems. And while the problematic technology is typically accessible to everyday people, the exceptional technology is only available to those with power.

After the Snowden revelations, several NYU graduate students recognized this fixation on technology as part of a troubling depoliticization process. “The idea that solutions for societal problems can come from technical progress and sophistication in the private sector,” they wrote, “is the bread and butter of Silicon Valley corporations.” In other words, by focusing reader attention on encryption instead of the social and political conditions that give rise to right-wing extremism, corporate media are doing yeoman’s work for their benefactors.

In an extraordinary op-ed for the New York Times (1/29/21), Shoshana Zuboff offered a different take on the January 6 riot—that such reactionary violence is an inevitable outcome of social surveillance, not digital privacy:

Social media is not a public square but a private one governed by machine operations and their economic imperatives, incapable of, and uninterested in, distinguishing truth from lies or renewal from destruction.

Time‘s Gladstein (1/26/21) thinks “the culture war over encrypted messaging might finally be ending,” but, so long as corporate media parrot FBI talking points and keep readers in the dark about their invalidity, the battle will continue with everyone’s online security as collateral damage.