Police guard a shop in Eriku, Lae, that was attacked by looters on Monday. Image: APR screenshot The National

By Miriam Zarriga in Port Moresby

Shots were fired and people ran helter-skelter, scurrying for cover, as police were stretched to bring the looters under control on Monday.

Police Minister William Onglo sternly warned opportunists not to take advantage of the loss of PNG’s founding father to riot or cause public disorder.

“Rioters and looters will be dealt with in the strongest term possible,” he said.

“Rioting and looting will never be the way the Melanesians resort, please show respect and honour during mourning.”

Onglo said the PNG and Melanesian way was to take the loss of Sir Michael Somare on Friday to heart.

Lae’s metropolitan commander Chief Inspector Chris Kunyanban said a crowd had gathered at 2-Mile outside Lae with the intention of marching to the Sir Ignatius Kilage Stadium.

Police confront crowd
“Police confronted the crowd at 2-Mile and told them they were not allowed to stage such a march,” he said.

“The crowd started pelting the policemen with whatever they could get their hands on.

“Several shots were fired from the crowd at the policemen and we had to fire tear gas into the crowd. 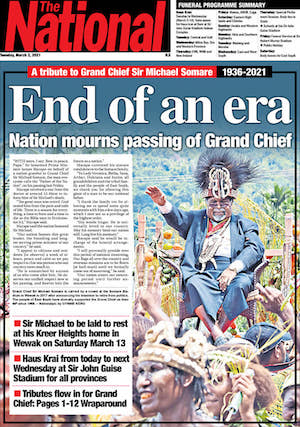 “End of an era” – how The National reported the death of founding Prime Minister Sir Michael Somare on Monday. Image: The National

“The crowd was dispersed, however, another group started gathering at Bumayong and Bumbu.

“Both areas were contained by police.”

Across to Kavieng, the largest supermarket, Joe Tong, was raided by opportunists who waited for police to leave after an awareness programme on the public holiday.

A crowbar was used to open the doors and the rioters rushed in to loot the supermarket.

Raiders in and out
Station commander Chief Sergeant Gabriel N’Drihin said the raiders were in and out in seconds.

Policemen arrived when they had already left.

In Port Moresby’s Gordon, a shop was looted after it was alleged that the shop owner tried to open its doors and looting was also reported at 2-Mile.

“We will be out in full force to ensure people moved about peacefully,” he said.

Kalebe went to the area and said several roadblocks were set up by people and sticks and stones were strewn across the road.

The situation on the ground in Lae was tense and police were out on main roads to tell people to go home while vehicles were told to get off the roads for the day.