From the launch of the U.S. war against Iraq to the onset of the Covid-19 pandemic there were over four million ‘excess deaths’ in the U.S., deaths over and above the rates experienced in other rich nations. Given the class distribution of longevity— the rich live a full decade longer than the poor on average, these excess deaths were overwhelmingly concentrated amongst those cast aside by neoliberal economic policies. Should this read as old news, the Lancet provides updated data suggesting that as of early 2021, none of the underlying causal factors have been resolved. Interpretation is that as devastating as the Covid-19 pandemic has been, to date it has been but a bit worse than business as usual in the U.S. of A.

This will no doubt read as a surprise, implausible even, to the managerial class, the PMC, who have benefitted from government policies that have favored them, and the financial economy in general. But consider: excess deaths as measured here (explained below) are relative to rich European nations that saw the same drop in economic growth as the U.S. in the Great Recession, but who also saw a secondary downturn in 2013 – 2014 that didn’t occur in the U.S. Assigning blame on the Great Recession requires looking past both different experiences in other rich nations, and that the problem both preceded, and followed, the Great Recession. It is peculiar to American-style neoliberalism and the much, much poorer nations. 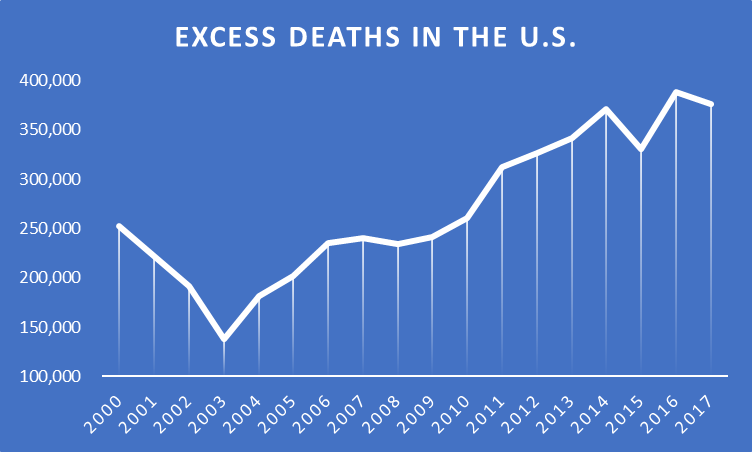 Graph: excess deaths, defined as a rate of deaths (per 100,000) relative to a benchmark, was high and growing prior to the onset of the Covid-19 pandemic. Given that the U.S. population is younger than the benchmark population, excess deaths should in theory have a minus sign on them. Instead, it totals over four million excess deaths since 2003. The causes: alcoholism, drug addiction and suicides, indicate a society in decline. Source: OECD.

This point— that the problems causing such widespread social misery are systemic, means that the solutions need to be so as well. To understand why, the difference between socialism and social welfare liberalism is that socialism requires a redistribution of power— from corporate executives and capitalist owners, to workers. A transfer of power, if not ownership, is what the New Deal accomplished. Conversely, welfare state liberalism subsidizes capitalism. One third of the recipients of food stamps (SNAP) who work, work at Walmart. Seventy percent work. SNAP is a subsidy of low wage employers, not its recipients.

The transfer of power of the New Deal was accomplished 1) through reforms that constrained business in its ability to rob people and crash the economy, and 2) through building public institutions that redistributed power from oligarchs and executives to workers. The Glass-Steagall Act of 1933 separated investment from commercial banking, thereby leaving investment banks to speculate with their own money. This effectively ended the financial mania that cascaded into the forced sales of bank ‘assets’ in the early years of the Great Depression. As readers know, Glass-Steagall was repealed in 1999. The result: a world-historical residential real estate bubble and the Great Recession.

Early in the Covid-19 pandemic, several trillion dollars was transferred from public coffers to Wall Street to assure that bankers would be able to buy-up the assets of the pandemic dead and dying at fire sale prices. The current housing bubble— inflation-adjusted home prices are back to where they were at the peak of the last housing bubble in 2006, is being driven by hedge and private equity funds buying residential real estate to rent it back to those who can no longer afford to buy a house. In other words, one new, New Deal has already taken place. The Federal government stepped in to secure the incomes, power and wealth of the rich. The effort was bi-partisan. 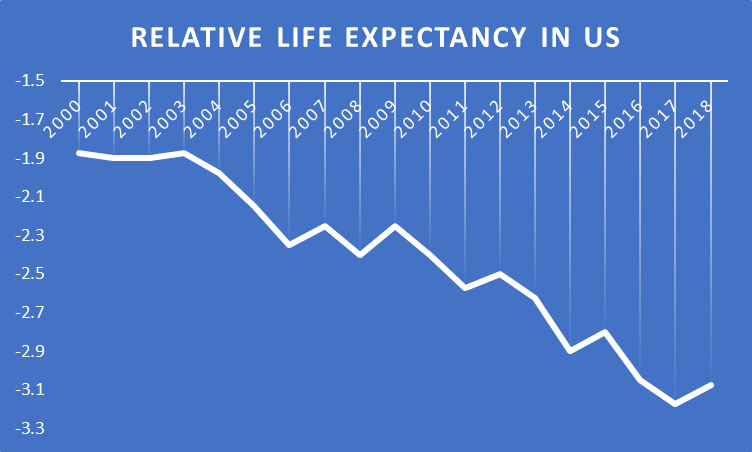 Graph: Life expectancy, both absolute and relative, is another way to consider death rates within and amongst nations. The U.S. has a much higher number of ‘excess deaths’— deaths over and above a benchmark number, than other rich nations. In the late 2010s, this resulted in absolute declining life expectancy in the U.S. In relative terms— relative to a benchmark that combined Canada, France, Germany and the U.K., the U.S. began the 2000s two full life-years below the benchmark. Then between 2003 – 2019, relative life expectancy in the U.S. declined another 1.3 years. The U.S. population is younger than that of the benchmark, meaning that age should have worked in the opposite direction. Source: OECD.

The data on excess deaths is provided to make the point that while the pandemic is a calamity, for much of the U.S., it is just one more in a long series of calamities. In fact, income levels have determined life expectancy for decades. Economic class reflects concrete differences in how people live. It isn’t a psychological malady as the term ‘economic anxiety’ suggests. This relationship of class to longevity has held irrespective of which party controls government. The relationship in the U.K. is directionally the same, but the difference in life expectancy is half as much. In other words, life expectancy is a policy choice.

The American war against Iraq was launched in 2003, making it a logical starting point in considering the question of rising excess deaths. According to counts of U.S. war dead, only 4,500 or so Americans (and 300,000 – 3,000,000 Iraqis) died as a result of the War. The other precipitating factor was that between 2001 and 2010, approximately six-million manufacturing jobs in the U.S. disappeared (graph below). This ended the paychecks and the health insurance coverage of six million workers as it economically devastated communities and entire regions of the U.S. Given that slow and fast suicide— alcoholism, drug addiction and shooting oneself, are leading causes of excess deaths, the latter seems the better explanation. 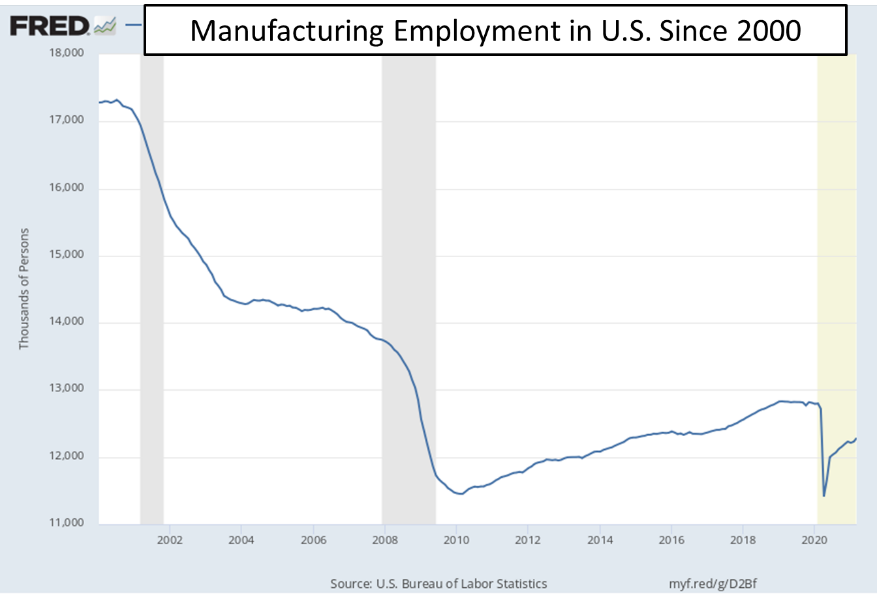 Graph: left out of the ‘White working-class’ storyline of economic dispossession is that manufacturing facilitated the Great Migration of Blacks from the rural South to the industrial North. Deindustrialization explains the relative immiseration of the (disproportionately large) Black, urban, working class that has taken place since the 1960s. This kind of ‘sectoral’ explanation— where Blacks disproportionately work in dying industries while Whites work in rising industries, usually implies that market capitalism determined which industries are rising or dying. Nonsense: NAFTA versus the Federal Reserve. Source: St. Louis Federal Reserve.

While the decline of manufacturing employment is widely known— enough so that it has been given a special place in the renewed culture wars, it is widely understood to be an historical artifact. In fact, policy decisions leading to deindustrialization were serially made over the last half century. From the perspective of ‘markets,’ dumping six million former manufacturing workers into the deindustrialized hellscape of rust-belt towns and cities reduced wages and economic security for all workers. Furthermore, the financial economy that replaced it has been being bailed out since the ‘Greenspan put’ began in the late 1980s.

Apparently unbeknownst to its members, the PMC— the financialized analog of the communist bureaucrats of 1950s pulp novels, doesn’t produce anything. For those alive and conscious in the early-mid-1990s, entire layers of the corporate ‘facilitators’ of capitalism were unceremoniously tossed on the economic trash heap. The employment recession that doing so represented was far out of proportion to drop in economic production that had defined the post-WWII relationship of economic growth to employment. The current bureaucracy of lobbyists, money managers, realtors and health insurance workers could similarly be written out of gainful employment with the flick of a pen.

Money, a claim on things of value, is the only thing of value that is produced. A service is performed— investing. But the entire edifice of managers, consultants, analysts and salespeople is ultimately a bureaucracy that is leveraged on the business of making things. Without things being made, there is nothing for the PMC to buy. In theory, this bureaucracy of ‘facilitators’ grows the economic pie, and in so doing, causes more to be produced than otherwise would be the case. But if the people who make things are expendable, why aren’t the facilitators? Again, this lightbulb went off in the early-mid 1990s, with the result that they were canned en masse.

Wall Street didn’t recover its 2007 level of employment until 2017. The Federal government and the Federal Reserve stepped in with every tool they had to save markets and the people and firms that ‘facilitate’ them. Recall, as this was taking place, six million manufacturing workers were being cut loose. At the peak of the housing bubble of the early-mid 2000s, drywall installers in California were reportedly earning $300,000 per year. Should the existing bubbles in house and financial asset prices ever be allowed to deflate, they would take a lot of the PMC down with them. Today’s corporate brand consultant earning $450,000 per year might find that their next opportunity is restocking oil filters at Pep Boys.

Lest this point elude readers, should six million members of the PMC be ‘freed’ to compete with the stocking staff at Pep Boys, wages at Pep Boys would decline. Giving the displaced PMC six months of additional unemployment benefits would be better than not doing so, but it wouldn’t solve the problem of more workers than jobs. In the 1930s FDR created nine new agencies, and built out six more, to provide employment for the unemployed doing work that served a social purpose. In so doing, the New Deal redistributed power away from the rich and corporate executives to workers.

The question that separates claims of a new, New Deal from delusional chatter is: does it transfer economic and political power from corporate executives, oligarchs and Wall Street to workers. And if so, to which workers? To understand the motive for the question, here is a list of New Deal programs. None of them were public-private partnerships in the neoliberal sense. Had FDR not garnered popular support for the New Deal, its Wall Street and industrialist opponents would have eaten him alive. The way FDR did this was to reduce their power while building power from below. Welfare state liberalism enhances the power of capital. Socialism redistributes it away from capital to workers.

In the parlance, this is the difference between ‘transformational’ change and superficial reforms intended to paper over problems. Should this language frighten, transformational change was shit-canning six million manufacturing workers while elevating corporate brand, yacht and wellness consultants. No one in DC is afraid of transformational change. They have been engineering it for the last half century. This is why a third of the country is on suicide watch. Again, the degree of social misery that would motivate 350,000 – 450,000 people per year to not care enough about living to continue doing so makes it the measure by which the U.S. should be judged.

To understand the politics around Federal programs as they unfold, the question is: does they transfer power from the rich, Wall Street and corporate executives to workers and the poor? A Federal Job Guarantee could be a transfer of power away from private employers. This is why they hate the idea. It would place a floor under private wages, provide gainful employment to the reserve army, and put people to work doing something more socially constructive than ‘brand consulting.’ Social welfare liberalism is the transfer of money without a transfer of power.

The question for the social welfare approach is: what will people do to earn a living? The ability to leverage the economy that makes things is finite— the greater the leverage, the greater the risk of calamity. Imagine a circumstance where some fair portion of PMC jobs go poof and there is nothing to replace them with. This is partly why Barack Obama chose to save Wall Street. Writer Ron Suskind spent a lot of his book Confidence Men following Mr. Obama as he pondered the question. The answer? That was how what’s his name got elected.

If you want to put the politics in context, follow the distribution of power.