War is glorified in the United States. Imagine a change in our culture so momentous that Americans who stand for peace are celebrated rather than denounced as unpatriotic, anti-military, or un-American. Imagine a world in which expressing an antiwar position is an aspiration our children are encouraged to respect, admire, and emulate rather than to be sneered at—as if the notion was some outmoded ’60s hippie ethic. Imagine a world where children develop and embody a strong commitment to nonviolence that continues throughout their lives. Imagine a world where military, police, and personal brutality and aggression are deemed unacceptable, except perhaps in situations of true defense where no other method has succeeded. Imagine…

Often when we attend public events in our communities, there is an effort to recognize and thank those who currently work in the military, as well as military veterans. This is a crucial element to reinforcing a culture of war. When young people attend such events, it sends a clear message that military “service” is one of the most valuable and respected occupations a person can choose. Just by joining the armed forces, one is automatically bestowed with a position of respect and honor no matter who they are or what they have—or have not—done.

Many elected government officials cite their military background in campaign literature and in speeches—not only as a point of pride, but as a qualification for holding a leadership position. Their offices are often decorated with plaques, certificates, photos, challenge coins, and awards that are shrines to celebrate the military and their devotion to it. Male political candidates for high office who are not war veterans often have to defend their patriotism and provide a rationale for why they did not “serve” in the military, the implication being that one cannot be seen as sufficiently patriotic without a military record.

When politicians of any level or stripe address a public gathering, they often ask people in uniform and military veterans to stand and be recognized. They will point at them and say something like, “You are true American heroes. You are the best this country has to offer. 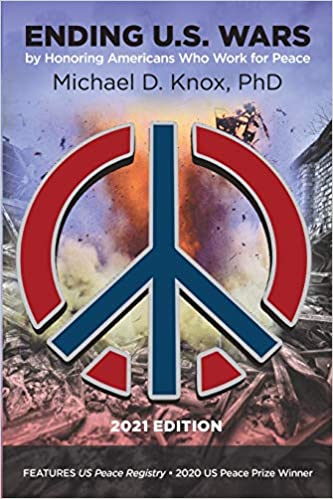 Thank you for your service.” Joe Biden ended his inauguration address, presidential victory speech, and his Democratic National Convention nomination acceptance speech with the words “And may God protect our troops.” Donald Trump usually ended his speeches with “God bless our great military.” Patriotic ceremonies and public recognitions of the military are so commonplace that few Americans even think about, much less question, them.

Does this mean that these politicians truly care about military veterans, about their health and welfare, not only on the battlefield but at home as well? Or, are they merely reinforcing the war culture that supports militarism and the industries that profit from war and fund their political campaigns? Or, are they just making an empty gesture because such reflexive “patriotic” accolades have come to be expected in our culture? In other words, do politicians single out and praise the military simply because it is expected and ingrained as part of our American culture?

In September 2020, The Atlantic reported that, during a visit to France, then President Trump referred to Americans who died in war as “losers” and “suckers.” Trump, who prided himself on saying things without concern for political correctness, has repeatedly disparaged the military in many private conversations. Yet in public statements, he echoed the sentiments of past presidents.

When citizens and politicians feel compelled to honor soldiers, they are much less likely to criticize the war. The commonly accepted cultural imperatives that “you earn the peace by winning the war” and that “war brings peace” help to maintain militarism.

To change our deep-rooted culture of war to a culture of peace, we must begin to question the individuals and organizations we choose to applaud and praise. One might ask, “Why don’t we recognize teachers, healthcare providers, parents, grandparents, volunteers, farmers, trades and salespeople, government employees, and the other essential workers?” After all, they make important and indispensable contributions to our community. Instead, expressions of public praise are reserved for soldiers, military veterans, and occasionally semi-militarized “first responders”—police and paramedics, and fire department personnel who “fight” fires.

Throughout American history, countless citizens have spoken out against war. What if we flipped the playbook in public settings and asked all people who have worked for peace to stand and be recognized? What if we referred to them as heroes for their courage and bravery, and then everyone in the audience applauded to thank them for their service? What if we dared to stand up and speak out for peace in the same settings where the military is acknowledged—on Independence Day, Armistice Day, Memorial Day, and at halftime at the Super Bowl—even if it is not on the official agenda?

One reason peace advocacy is marginalized, and why the U.S. wages so many wars, is that few citizens today speak out publicly against warfare. Most Americans remain silent while our military wounds and kills innocent civilians in impoverished countries that have never invaded or threatened to invade the U.S. or its allies, and don’t have the resources to do so.

In a representative government such as ours where members of the House of Representatives seek election every two years, voters have enormous and potentially transformative power. But, citizens must recognize and use their authority or it will be usurped by corporations and special interests with deep pockets. Candidates running for elective offices would be responsive to widespread antiwar sentiment because it would influence the election results. Imagine the impact if just 1 percent of the population—more than three million people—marched together in an antiwar rally. What might happen if 1 percent of voters contacted their representatives in Congress and demanded an end to the current wars?

In order to establish a culture of peace, we need to change the current culture of war. Social barriers must be removed so that citizens do not fear reprisals for speaking out. A first step in this process is to recognize, honor, and document the work of Americans who have demonstrated the courage to speak out against war and work for peace. In addition to being role models and encouraging others, some of these leaders and activists may choose to run for office and help further our playbook for cultural change.

We have courageous Americans to look to for examples, such as US Peace Prize recipient the Honorable Col. (Ret.) Ann Wright who, after twenty-nine years in the U.S. Army and Army Reserves and another sixteen as a diplomat with the U.S. State Department, resigned in protest on the eve of the invasion of Iraq. She is now a tireless and fearless advocate for peace throughout the world, from Cuba to Gaza to Korea to Standing Rock. Ann Wright is but one example of someone worth honoring and holding up as a role model.

Consider CODEPINK: Women For Peace, founded in 2002 by Medea Benjamin, Jodie Evans, and other activists. It has become one of the most innovative, effective, and visible antiwar organizations this country has known. Members wearing the group’s signature pink color can be seen at rallies and engaging in civil disobedience, putting their lives in danger to call attention to U.S. militarism, aggression, and inhumanity, but always with an emphasis on joy and humor. CODEPINK was the US Peace Prize recipient in 2014.

American culture and behavior toward others have changed in our lifetime. When I was growing up in the 1960s, very few people could imagine that we would see significant, measurable changes regarding a variety of civil rights issues including race, gender, and LGBTQA+. If we can make progress in other cultural areas, we can move toward a culture of peace. It’s a matter of educating our young people, developing role models, and reinforcing antiwar behavior so that our nation will no longer tolerate starting wars or interfering to destabilize the governments of other countries.

There are many examples of positive behavioral cultural change that have occurred over just a few decades; alterations of human activities that have saved countless lives. Disease prevention comes immediately to mind, especially for those who lived through the HIV pandemic at a time when effective medical treatments were not available. For many, the adoption of condoms replaced the practice of unprotected sex. Also, consider the rapid reduction in stigmatization of marijuana and its widespread legal use in recent years. Cultural norms can change—radically and with surprising speed.

Do you remember a time when most Americans smoked tobacco? Or, not so long ago, when possession of a single marijuana joint was a criminal offense? Another example: when I was a young driver, cars didn’t have seatbelts. When they first were made available in the late 1950s, most Americans, including me, didn’t use them. When my children were in preschool and elementary school they were educated about the importance of wearing a seatbelt, and whenever I drove them, they would insist loudly that I stop the car and put on my seatbelt. Essentially, the education of young people influenced my adult human behavior, and my habit was changed.

The education of children has had a positive cultural impact, as have criticizing bullying, promoting civil rights, and exploring family planning options. Young people should be taught that they can determine the kind of world they want. They need to learn critical thinking skills and be encouraged to question the norm. We need to educate all of our children about proven means of establishing cultures of peace and the importance of speaking out against cultures that promote violence and domination—not only by telling or “teaching” them, but by being examples for them.

Hopefully post-coronavirus America will see handshaking disappear as a social custom. This is a custom that dates back to antiquity and that originally signified the lack of a weapon. Even before COVID-19, this ritual was a leading mode of transmitting diseases that kill thousands of Americans every year. Efforts in some parts of the world to drastically and rapidly change human behavior— to suspend daily routines by social distancing, wearing masks, and staying at home to slow the spread of the novel coronavirus—show what can be done when lives are at stake.

We have seen some hope for change as the mass protests following the execution of George Floyd overcame aggressive police and soldiers and seemed to garner the support of the nation ultimately leading to the conviction of Derek Chauvin. What a great model for action if the American people should ever become outraged by U.S. mass murder and violence abroad. It might be a natural progression considering that Black and Brown people are disproportionately affected by war and militarization.

Hopefully someday U.S. wars will be deemed a non-essential activity as Congress cuts funding for the military. We must eliminate war, healthcare disparities, systemic racism, aggressive policing, poverty, climate change, and pandemics. These are the things that are terrorizing Americans.

This article is excerpted from Michael Knox’s book, Ending U.S Wars by Honoring Americans Who Work for Peace.

The post Imagine a Culture of Peace: the U.S. is a War Culture, But that Can Change appeared first on CounterPunch.org.