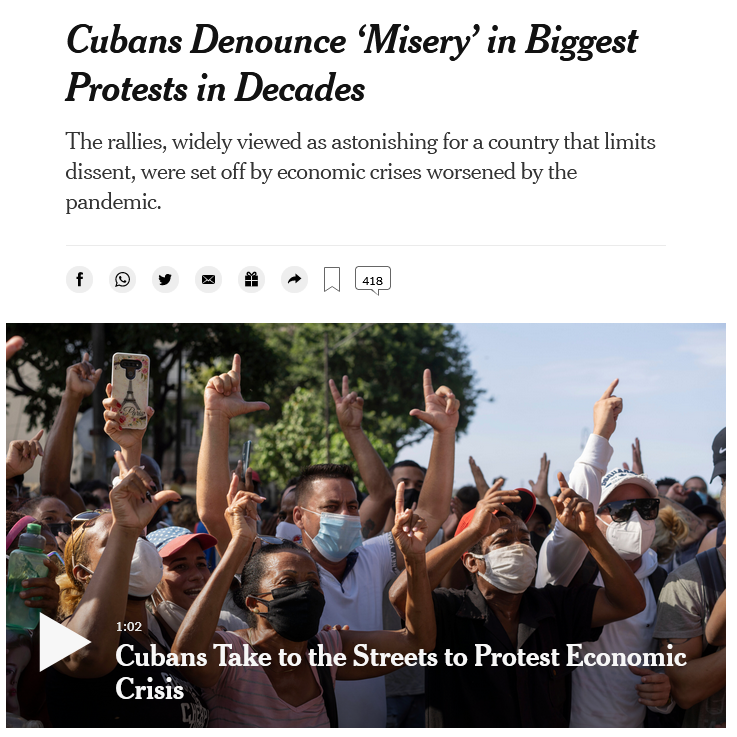 New York Times (7/11/21): “In a country known for repressive crackdowns on dissent, the rallies were widely viewed as astonishing.”

A wave of protests in Cuba became the somewhat unlikely focus of global attention earlier this week, the events becoming the worldwide No. 1 trend on Twitter for over 24 hours, as celebrities, politicians and even the president of the United States weighed in on the action. A statement from Joe Biden’s office read:

We stand with the Cuban people and their clarion call for freedom and relief from the tragic grip of the pandemic and from the decades of repression and economic suffering to which they have been subjected by Cuba’s authoritarian regime.

Media, too, were quick to focus on the story, giving the protests front and center coverage, something extremely unusual for demonstrations in Latin America. Far larger and more deadly movements in Chile and Ecuador were mostly ignored by the corporate press (FAIR.org, 12/6/19). Meanwhile, the political situation in Haiti, which has seen three continuous years of nationwide protest, was overwhelmingly ignored (FAIR.org, 10/26/19) until the assassination of US-backed President Jovenel Moïse last week.

However, while giving the protests a great deal of coverage, the corporate press across the political spectrum consistently downplayed one of the primary causes of unrest: the increasingly punitive US blockade.

“In a country known for repressive crackdowns on dissent, the rallies were widely viewed as astonishing,” wrote the New York Times (7/11/21), presenting the movement as a laudable action against an authoritarian government that had brought little but “misery” to its people. Only 11 paragraphs into the story did it mention the sanctions, and even then, it put the information in the form of an accusation from the Cuban government, a source the Times had already cued the reader to be skeptical of. 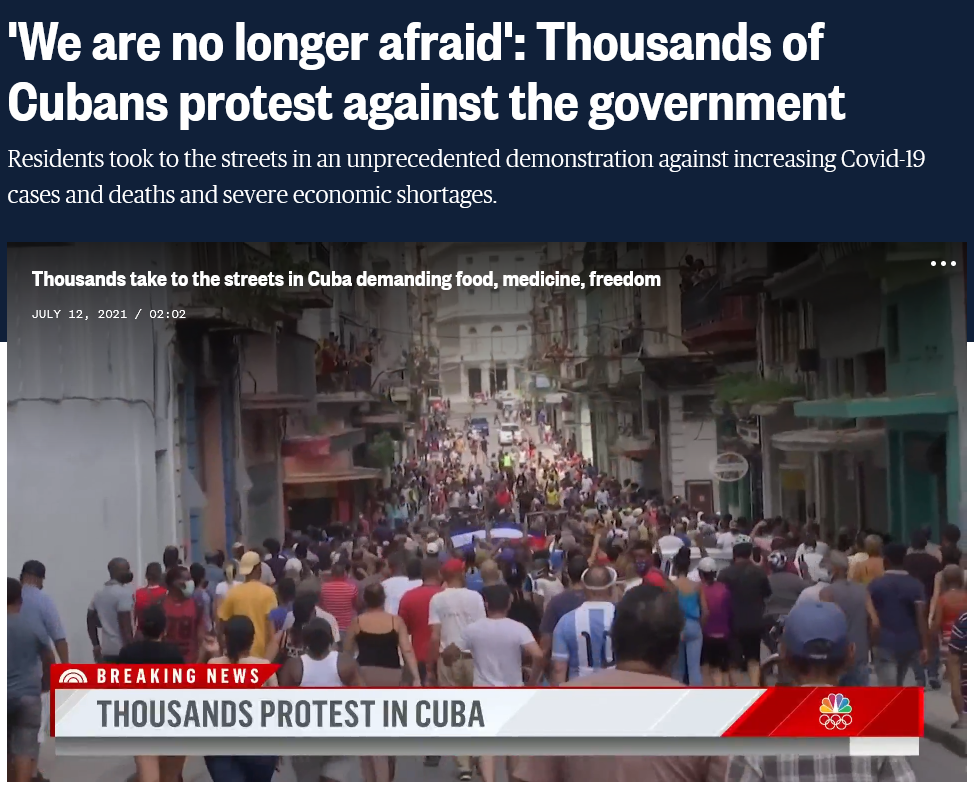 But this was actually among the most balanced coverage from corporate media. NBC News (7/12/21) waited until the last of 24 paragraphs to note that “the Cuban government attributes the economic crisis to US embargo against Cuba and sanctions, which former President Donald Trump intensified.” The story had previously claimed that Cuba was effectively choking itself by refusing to allow humanitarian aid into the country.

The Wall Street Journal (7/12/21) did the same thing, only mentioning the sanctions in the final paragraph, and only in the mouth of President Miguel Díaz-Canel, the head of an “authoritarian regime,” a media codeword reserved for governments the US does not like (FAIR.org, 8/20/18). None of these articles went into any detail about the sanctions or their demonstrable effects.

Devoting such little time to sanctions, relegating them to the final paragraph and framing them as accusations rather than facts, has the result of conveying that they are of little importance. If this was not clear enough, the Washington Post’s editorial board (7/12/21) made it explicit, claiming that Díaz-Canel was reacting with “predictable thuggishness,” conveniently “blaming everything on the United States and the US trade embargo,” when, in fact, it was largely the fault of the “aging dictatorship” itself. 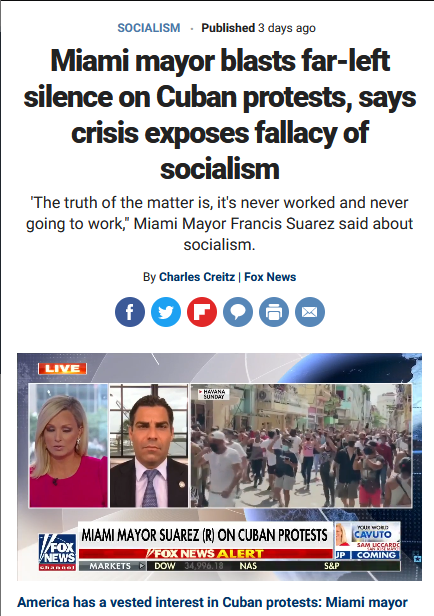 Perhaps unsurprisingly, Fox News (7/13/21) did not mention the sanctions at all, putting the blame for Cuba’s economic malaise on the Communist Party entirely. It even gave time to Miami Mayor Frances Suarez to call for the US to bomb Cuba. We must put together a “coalition of potential military action in Cuba,” Suarez told Fox, receiving little pushback.

What is particularly galling about the refusal to take seriously the idea that an economic attack from the world’s sole superpower is at least a major factor in Cuba’s troubles is that this is the US’ explicitly stated goal. Official documents going back to 1960 note that, by “denying money and supplies to Cuba,” the US hopes to “decrease monetary and real wages, to bring about hunger, desperation and [the] overthrow of [the] government.”

Last month, the United Nations declared for the 29th year in a row to condemn the sanctions against Cuba. The vote in the General Assembly was 184 to 2, the sole votes against being the United States and Israel. The sanctions mean that Cuba is unable to trade freely with other nations, causing acute shortages of goods—including medicines—that cannot be made on the island. In 2014, the UN estimated that the sanctions had caused $1.1 trillion worth of damage to the island’s economy.

Despite being limited in size and immediately met by substantial counter-demonstrations, corporate media were keen to present the weekend’s actions as widespread and momentous. As one Miami resident insisted to NBC News (7/12/21), “The whole country is in the streets.” Video evidence seems to suggest otherwise, and that the counter-demonstrations were at least as well-attended.

Nevertheless, many outlets explicitly stated the opposite. Reuters (7/11/21), for example, reported, “Thousands took to the streets in various parts of Havana on Sunday, including the historic center, drowning out groups of government supporters waving the Cuban flag and chanting Fidel.” Meanwhile, Voice of America (7/12/21) claimed that despite Díaz-Canel’s demands, he could only muster “smaller pro-government demonstrations.” 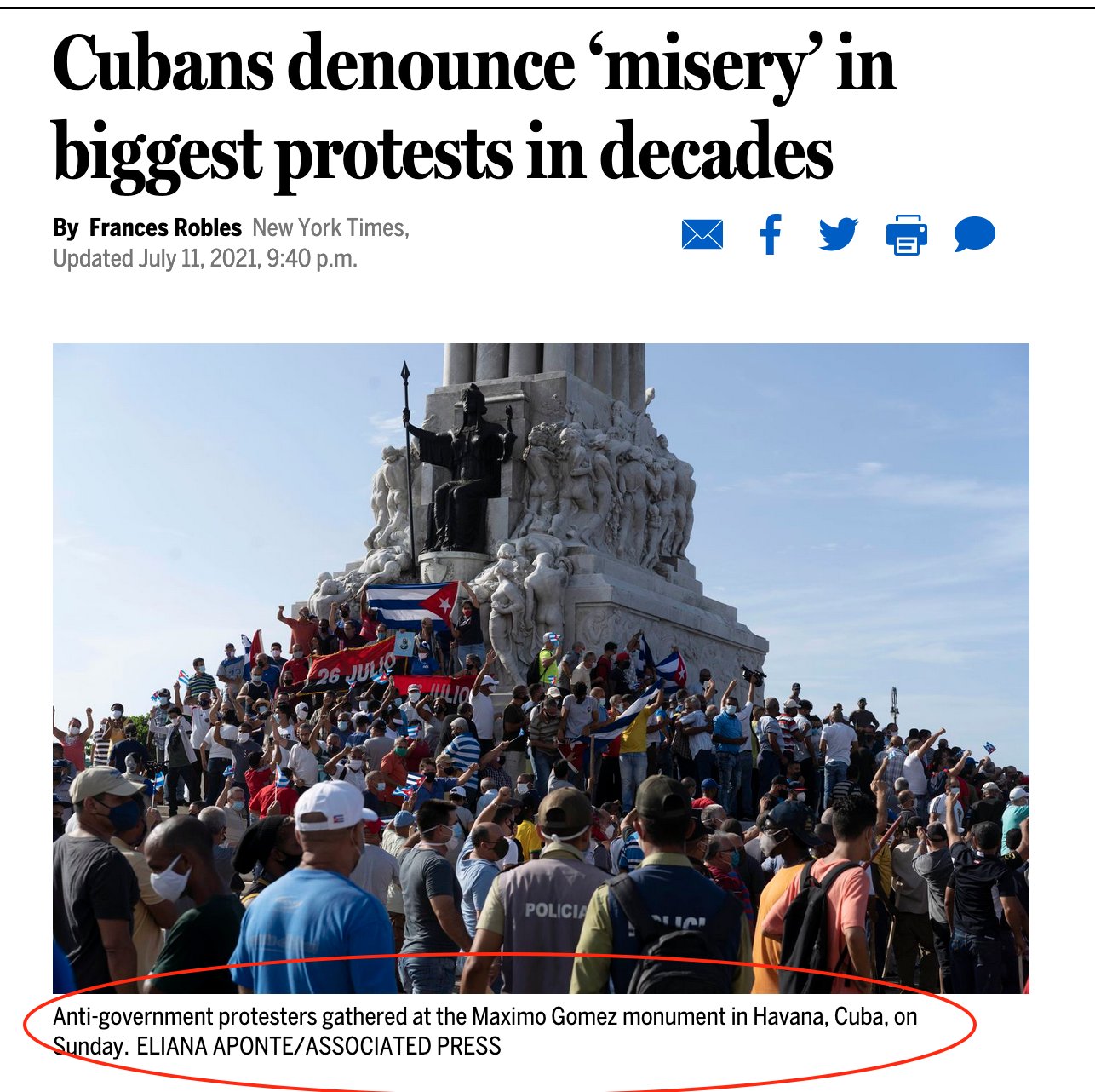 The Boston Globe (7/11/21), like numerous other  outlets, published a photo of a pro-government rally to illustrate the size of anti-government protests.

If this was the case, it is ironic indeed that a host of outlets resorted to using images of pro-government demonstrations to illustrate how large and impressive the anti-government movement was. The Guardian (7/12/21), Fox News (7/11/21), Boston Globe (7/11/21), Financial Times (7/12/21), Yahoo! News (7/11/21) and NBC’s Today program (7/13/21) were among that used an image of masses of government supporters gathering in central Havana to show the extent of the anti-Communist demonstrations. To anyone with knowledge of Cuba, the giant red and black flags emboldened with the words “26 Julio” (Fidel Castro’s political party) should have been a dead giveaway. (The Guardian and FT updated their stories after my tweet pointing out the false attribution went viral.)

Meanwhile, CNN (Instagram, 7/11/21) used a photo of an impressively attended rally in Miami to promote an article headlined “Cubans Take to Streets in Rare Anti-Government Protest Over Lack of Freedoms, Worsening Economy.” (The post has since been deleted.) National Geographic (7/13/21) pulled a similar trick, although they at least included a caption informing eagle-eyed readers that the image was taken in Florida. Pictures of anti-government demos in Cuba showing similar numbers of people appear not to exist.

There is every reason for Cubans to be discontent. In recent times, prices for increasingly scarce foodstuffs have risen, and there are shortages of some basic goods and medicines, leading to increased deprivation, long lines and waiting times. Yet by refusing to frame these as intentional consequences of US foreign policy, corporate media consumers are less prone to critique their own government’s actions and more likely to support the very measures that are partially responsible for keeping Cuba in the state that it is in. A skeptical reader might wonder if that is exactly the point.

The post Media Play Up Protests, Play Down Effect of US Sanctions in Cuba appeared first on FAIR.