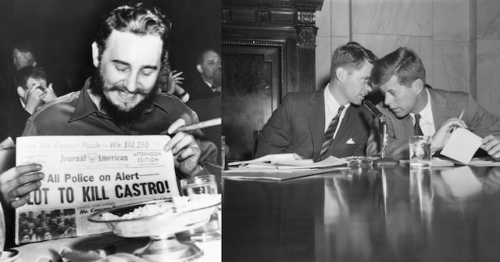 The need to possess Cuba is the oldest issue in U.S. foreign policy.
— Noam Chomsky, Excerpted from Rogue States, 2000

When you watch the latest news stories about unrest in Cuba, are you relying on critical thought to process them, or are you lazily falling back on decades of deeply embedded propaganda about Castro, communism, etc.? Are you familiar with your country’s history with Cuba? Are you open to accepting that God’s Country

may have committed atrocities far worse than anything you’ve been told about the Cuban regime?

If you claim to hate communism, do you ever ask yourself why? Is it based solely on official textbooks, news stories, and flag-waving speeches by U.S. politicians? Do you know what communism actually is? Can you differentiate between communism, socialism, Marxism, etc.? Do you know for sure that genuine communism has ever actually existed in practice?

My point here is not to defend or condemn or even juxtapose communism and capitalism. I’m not a fan of either and I pledge no allegiance to Cuba. I do, however, pledge allegiance to context, nuance, perspective, and truth. For example, when you assess current Cuban society, it cannot be accurately done without factoring in six decades of the U.S. embargo. FYI: The U.S. Chamber of Commerce estimates that the ongoing embargo costs the U.S. economy $1.2 billion per year in lost sales and exports, while the Cuban government estimates that the embargo has cost the island itself $753.69 billion. To discuss Cuban politics, culture, or economics without factoring in the blockade is an act of intellectual dishonesty.

But there’s more — much more. The history of Cuba features a litany of abuses rained down upon it by its powerful neighbor to the north. To follow is just a small sampling to keep in mind whenever you decide to spout off about the current situation. 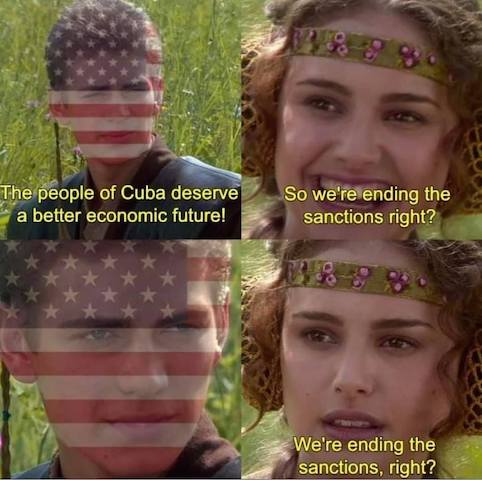 In 1897, U.S. President Teddy Roosevelt stated bluntly, “I should welcome almost any war, for I think this country needs one.” His wait lasted less than a year. February 15, 1898, was a muggy Tuesday night in Havana Harbor. Some 350 crew and officers settled in onboard the U.S.S. Maine. “At 9:40 p.m., the ship’s forward end abruptly lifted itself from the water,” writes author Tom Miller. “Along the pier, passersby could hear a rumbling explosion. Within seconds, another eruption — this one deafening and massive — splintered the bow, sending anything that wasn’t battened down, and most that were, flying more than 200 feet into the air.”

By the time the sleeping giant was jarred into alertness by the Maine explosion, Cuban and Filipino rebels were already fighting Spain for independence in their respective lands. The Maine was in Havana Harbor in 1898 on a purportedly friendly mission. “Yet,” writes Miller, “the visit was neither spontaneous nor altruistic; the United States had been eyeing Cuba for almost a century.”

“At a certain point in that spring, McKinley and the business community began to see that their object, to get Spain out of Cuba, could not be accomplished without war,” adds historian Howard Zinn, “and that their accompanying object, the securing of American military and economic influence in Cuba, could not be left to the Cuban rebels, but could be ensured only by U.S. intervention.”

American newspapers, especially those run by William Randolph Hearst (New York Journal) and Joseph Pulitzer (New York World), jumped on the Maine explosion as the ideal justification to drum up public support for a war of imperialism. “Tabloid headlines depicting Spanish atrocities against Cubans became commonplace, and the influential papers of both men were outdoing each other in the sensationalized screaming for war,” says historian Kenneth C. Davis. When Hearst sent artist Frederick Remington to Cuba to supply pictures, Remington reported that he could not find a war. “You furnish the pictures,” Hearst replied, “and I’ll furnish the war.”

Spain was easily defeated, the legend of Teddy Roosevelt was manufactured whole cloth, and the Cubans (and Puerto Ricans) found themselves exchanging one colonial ruler for another. In the Philippines, where U.S. soldiers were ordered to “Burn all and kill all,” over the next decade, six hundred thousand Filipinos were eventually wiped out… all to the war cry of “Remember the Maine! To hell with Spain!”

These myths do more than justify actions at the time. They become part of our concept of our country and get exhumed and pressed into service when needed. These myths survive despite careful studies that expose reality. For example, in 1976, Admiral Hyman Rickover of the U.S. Navy mounted an investigation of the Maine disaster. Rickover and his team of experts concluded that the explosion was probably caused by “spontaneous combustion inside the ship’s coal bins,” a problem common to ships of that era. Oops… 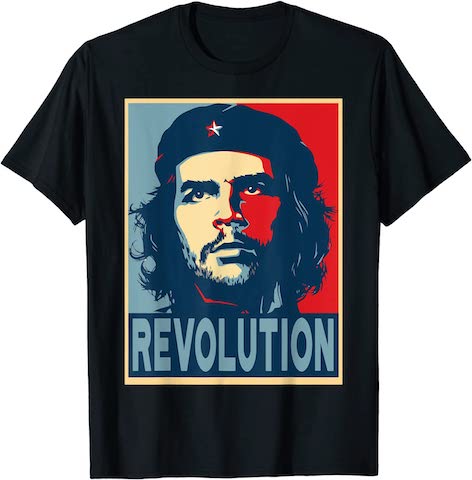 Today’s perception of Cuba has little to do with the fabricated heroics of one of the faces carved on Mount Rushmore. Since 1959, it’s mostly been about Fidel Castro and his legacy. The Cuban Revolution, the ensuing U.S. blockade, and events like the Bay of Pigs and the Cuban Missile Crisis have all been documented — in varying degrees of veracity — elsewhere. We know much less about the lower intensity U.S. assaults on Cuba… and even if we did, they are automatically justified by an ever-ready catalog of Castro’s atrocities (real and imagined) and his ties to the USSR.

Under Castro, explains Noam Chomsky, Cuba was portrayed as “an agent of the Kremlin, bent on taking over Latin America and taking over the United States.” The communism angle, combined with Castro’s authoritarian rule, lent free reign to U.S. policy planners to sell Castro as the devil in our backyard. Effective agrarian, educational, and medical reforms were all cleverly omitted from any discussion about Cuba. The focus remained on the communist in charge… keeping the public distracted from what was being done behind the scenes by their own government.

The Cuba Project, a.k.a. “Operation Mongoose,” was initiated by the Kennedy administration in January 1962 with the stated U.S. objective of helping the Cubans “overthrow the communist regime from within Cuba and institute a new government with which the United States can live in peace.”

The U.S. demonization of Castro and subsequent aggression toward communist Cuba since 1959 is a blueprint of spin and deception and served to strangle the revolution in its infancy. “The world will never know what kind of society Cuba could have produced if left alone,” says historian William Blum.

Right about now, I can hear some of you bellowing about Castro aligning with the Soviets. But the Cuban leader did come to Washington in April 1959 to discuss relations between the two governments. A different course could’ve been chosen by the Home of the Brave

. Instead, President Dwight Eisenhower refused to meet with Castro. He was too busy golfing in Georgia so he sent Vice President Richard Nixon in his place. The rest, as they say, is history. But, then again, Cuba has never really stood a chance.

For a glimpse into how the U.S. views Cuba (and other nations in that geographical area), consider what Marine Brigadier General Smedley D. Butler said all the way back in the 1930s.

Calling war “possibly the oldest, easily the most profitable, surely the most vicious” racket of all, in which “profits are reckoned in dollars and losses in lives.” Summing up his career, Butler explained: “I spent 33 years being a high-class muscle man for Big Business, for Wall Street and the bankers. In short, I was a racketeer for capitalism. I helped purify Nicaragua for the international banking house of Brown Brothers in 1909-1912. I helped make Mexico safe for American oil interests in 1916. I brought light to the Dominican Republic for American sugar interests in 1916. I helped make Haiti and Cuba a decent place for the National City [Bank] boys to collect revenue in. I helped in the rape of half a dozen Central American republics for the benefit of Wall Street.”

As far back as the American Revolution, Secretary of State John Quincy Adams announced that U.S. control of Cuba was “of transcendent importance.” This brings us back to today’s headlines. 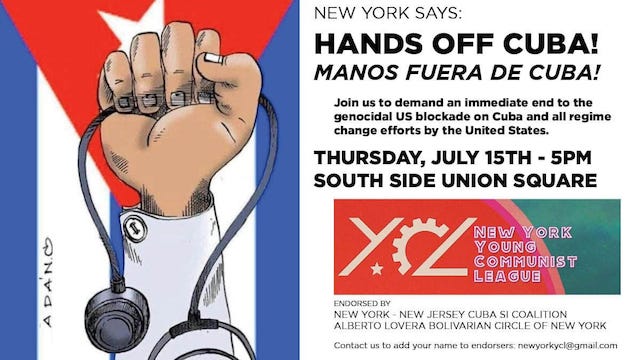 You may despise communism (or what you believe communism to be) with every fiber of your body. That still shouldn’t prevent you from suspecting that the current upheaval in Cuba is part of a covert plan by the U.S. government — made easier by the recent spread of cellphone use in Cuba. Let’s go back to the description of Operation Mongoose: “Overthrow the communist regime from within Cuba and institute a new government with which the United States can live in peace.”

By “live in peace,” the Land of the Free

means: Exploit cheap labor, turn the island into a hot vacation destination, and poach whatever intellectual resources we can from the Cuban in terms of military, science, etc. (just as the U.S. rescued Nazi war criminals after World War II to create the CIA and NASA). As you watch the latest news coming out of Cuba, keep in mind that the U.S. has overtly or covertly overthrown dozens and dozens of foreign governments over the past century or so. It’s never about spreading freedom. It’s always been about conquest and power. Things will stay this way if we continue to willfully let the corporate media program us.

The post What do you really know about U.S.-Cuba relations? first appeared on Dissident Voice.

This content originally appeared on Dissident Voice and was authored by Mickey Z..